A perennial discussion among players is the old, "How much of BG is luck and how much skill?" You'll get as many different answers as there are players in my experience, but clearly the game is a mix of the two. Even the best player can't win every match, even the worst can't fail to win some. The longer the match, the greater the winning chances of the better player, because over time the luck is more likely to even out. In shorter matches though it is rare to see even luck or anything close to it.
Can we define luck? The bots assess the luck factor when they present the statistics for a match and they do it like this. Before every roll of the dice they make an estimate of the equity of the position and then look at all the 36 possible rolls and estimate what the equity will be after each of those rolls if the roller makes the best play with them. At the end of the match, the bot sums the equity gains or losses for each side and divides them by the number of rolls and that's your luck factor.
However, this can't be a complete picture of what is happening, because occasionally you can have the best of the luck and play the best and still lose! Can we say why this is?
Every match is made up of a number of games of course; a five point match for example may be decided in a single game or very rarely take 9 games. Sometimes a match can be won by the less lucky player, but if you begin to look at the statistics for individual games you will see that they are almost invariably won by the side with the greatest luck. In 1% of the games at best is the luck so nearly even that the better player can overcome "bad" luck and win the game. So where is the better player's edge? It's pretty clear that it lies in his cube handling. When he gets the bad luck, he keeps the cube as low as possible, when he gets the good luck it's as high as possible. Heresy I know, but all that skill handling the checkers matters less than we like to think. The real trick is to use the cube well.

So, what do we mean by using the cube well? Good cube action, whether doubling or refraining from doubling, passing or taking has one central characteristic. It increases our equity in the position. What is equity? It's just what the position is worth to you on average. In a position that you win 60% of the time, then your average gain if you play the position 100 times will be 20 points, 60 wins minus 40 losses. Your equity is 0.2 points per game.
It might appear that if you are the favourite, then doubling will exactly double your equity, but in practice that is rarely so, because owning the cube has value for your opponent, a lot of value if the game has a long way to go, much less if the game is near the end. Sometimes of course, if it is the last roll for example, it may have none at all and then your equity will indeed double with the cube turn.

Expert players can and do put a price on a position, estimating often with great accuracy their winning chances and using the cube accordingly. They rarely miss an opportunity to double correctly and they almost never make very bad takes. For those of us who lack the skills to assess positions in this way, there exists a golden rule that infallibly leads to good cube action in positions where we are considering a cube turn. It is called Woolsey's rule and it goes like this. "When considering a double, look at the position from your opponent's point of view. If you are in his shoes, are you certain that this is a take? If you are not certain, turn the cube."
Wow, can it really be that simple? Yes it can and using it can only improve your win ratio. You may of course be assessing the position incorrectly and making a mistake, but you have to back your judgment at some point. Not only that, doubling has several things going for it, particularly if you are a weak player. It gives your opponent the chance to make an error and pass. He can't make this error if you don't double. Also, it shortens the match, definitely in the favour of the weak player.

The reverse of this rule doesn't hold. Sometimes the take is absolutely clear and it is still correct to double. Sometimes the pass is absolutely clear, but it is correct to refrain from doubling and play on for a gammon. The decision whether to cash or try for the gammon is often a very tough one, but if you are uncertain, turn the cube anyway. Even if playing for the gammon was the correct decision, getting a pass puts a concrete point on the scoresheet, whereas the more-than-a-point that you get on average by playing for the gammon is theoretical and may well need a lot of skill along the way. Another upside to cubing in these positions is that sometimes they take and then your equity goes through the roof!
So, if you play at any level below advanced, it is highly likely that bolder doubling will get you more wins. Does this mean bolder taking too? I don't think that it does. You must take of course if you think that on average you will lose less than a point after taking, but if you are not sure, give it up and go on to the next game. A small theoretical loss is usually a price worth paying to keep your losses down, particularly in games where a substantial part of your equity relies on you making a recube at the correct point. If you are going to risk more points, it makes sense to take the risk in games that you are winning.

The phenomenon of shorter matches favouring the weaker player accounts for a well known strategy to boost your rating on FIBS.com, the First Internet Backgammon Server, a popular free play site. There are always a number of bots available to play and of course they play at a very high level. If your rating is normally below 1700 as most are, then playing these bots in 25 point matches can seriously boost your rating, provided you adopt the strategy of doubling immediately, taking any recube and redoubling at the first opportunity until the cube reaches 32. Your chances of winning the match are probably about 5% if you play normally, but have to be much greater if you can reduce the match to a single game! Once you get to a rating of about 1770, the law of diminishing returns catches up with you and you won't increase much further. This process will get you a satisfyingly high rating, but of course you will gain fewer points when you win against humans and of course drop more points when you lose, so it is ultimately self defeating. Moreover it will seriously damage your skill level, as you can't learn to play well while playing badly!

A very useful tactic when trailing in shorter matches is to use Uncle Jake's Law. This is essentially, "Develop some sort of gammon threat and ship it in"! As above, can it really be that simple? Yep, don't worry about how many gammons you may win or indeed lose, if you are a solid favourite and there are more gammons around than there was at the start, just turn the cube. Here's a good example from a recent five point final in a Bagolympic tournament. 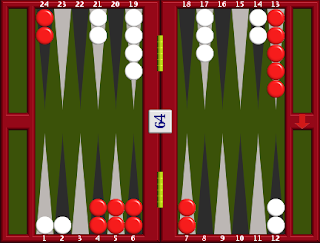 Red is on roll and trails 0-2 to 5. Is this a double? Technically no, he has a tiny lead (5 pips), but his back checkers have yet to get under way and his major asset, the four prime, is devoid of builders as he still has an awkward stack on the midpoint. The take is trivially easy. Snowie thinks that he will win about 59% here including 20 gammons. However, 20 is more than the 13 that he started with, so by Uncle Jake's Law a double reckons to be a good practical play, even though technically it is a small error. Why is this? Bots asess positions assuming that both sides will play as near to perfectly as possible from here, including using the cube if opportunity presents itself. Here though, White's play reckons to be very difficult, as she will constantly have to balance trying to win the game and trying to avoid being gammoned. Red's play reckons to be fairly easy, splitting his back checkers soon, bringing down builders from that fat midpoint and attacking White's blots with abandon. He can do this because of course his gammons are very valuable, getting him straight to the Crawford game whereas White's gammons are much less useful to her, because she will waste one of the four that she might win overshooting the target. The cube is not very useful to White either, as she will find it quite difficult to double Red into this correctly. Her doubling window, the area of opportunity between the first point at which she can redouble correctly and the point at which Red should pass is very small, between 76% and 84% at this score.
In the match things went Red's way with a spectacular backgammon! Boldness be my friend is the key. Backgammon isn't a game for the fainthearted, it's a game of aggression and the more aggressive player is the more successfull player. Let this be you!

Woolsey is Kit Woolsey, great teacher and brilliant player, particularly strong with the cube. His writings, webpage and matches are a rich mine of valuable information and you should take every chance to study these, particularly on the occasions when he plays a match on FIBS.
Uncle Jake is Jake Jacobs, theorist, writer and much travelled player. One of the most amusing men in the game, his easy going manner masks his very real skills. Very technically minded students may like to study "Can A Fish Taste Twice As Good?", his work with the late Walter Trice on adapting play to adjust for skill differential.
Posted by dorbel at 04:48

another excellent article which warrants further study
where did the 13 come from in
* Snowie thinks that he will win about 59% here including 20 gammons. However, 20 is more than the 13 that he started with, * ?

About 26% of games played to a conclusion end in a gammon for one side or the other, so in the opening position either side wins 13 gammons out of their 50 wins.