Last Saturday we were treated to an exhibition match on Fibs. Runnerup (Martin Birkhahn) was the Fibsleague Master's Champion for 2009 and Franck del Rio, the Director of Fibsleague arranged for him to play an exhibition against Masayuki Mochizuki from Japan. The current world champion Mochy, as he is known for obvious reasons, is a great ambassador for the game, travelling the world to play backgammon and impressing everywhere with his skill.
The 11 point match was watched by an enthusiastic crowd of 30 -40 fibsters and over the next few days I want to take a look at some of the more interesting plays.
Set up a board and follow the play.
Mochy is playing the Red checkers and Martin the White. Here's how game 1 went.

This is the best play, hitting, making a good point and moving two more checkers into the attack zone all in complete safety. You often see 13/7*, 8/5(2) 0r 13/7*, 6/3(2), but they make more sense when trailing in the match and you need to go after a gammon from the word go.

Mochy commented, "Already I don't know what to do". It's the third move of the game and a master is puzzled, which shows you how hard backgammon can be. He opted for the simple play, no doubt feeling that four blots was a bit much even for the opening. It's a close call. Bar/21, 13/11 is probably equally good, with lot's of potential for development if he isn't on the bar next turn.

White has the checkers for a blitz and opts for the natural-looking 13/7, 8/4*, but this looks like a small error. He leads by 14 pips after the roll, so he doesn't need to try for the blitz and leave 20 return shots. The computer play is 24/20, 13/7. I can't say that I would have found this over the board, but Snowie likes it best. 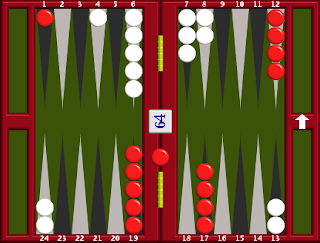 Whoops, 6-6 from the bar. With his lead and his attacking possibilities White is already in the doubling window and could ship one in here. No chance of a bad pass I think, so you can't blame him for waiting, with the match only just under way and a large audience.

Mochy enters with a lemon and does the best he can, slotting both 5pts and putting White on the bar. This is actually a defensive play, taking away half of White's next roll and and giving him a few bad numbers. It leaves this position..................... 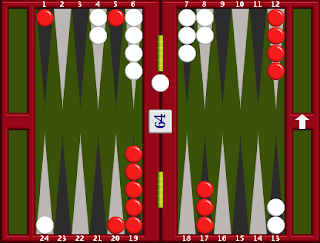 ..........and it's clear that Martin should double from the bar. Race lead, much better position, substantial threats, it cries out for a cube. Only Martin can tell us why he didn't turn it and we can bet that Mochy was pleased not to be doubled.

White throws one of his bad sixes, so feels pleased that he didn't turn it.

I'm not sure that Mochy makes the best play here. The blot is useful but subject to 6 hitting numbers, all of which don't play well on the other side of the board. Snowie plays 8/7(3), 6/5, hard to find, but with White about to attack on the other side a bit of solidity can't hurt.

Again Red makes a defensive hit, hoping to keep White off balance for a roll. 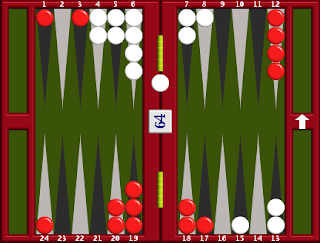 Now White doubles from the bar. Mochy thought about taking this one and at the time I thought that it might be a close take, but he summed it up perfectly. "4 blots, outboarded, no anchor, behind in the race, I pass".

So, a short but instructive game. Mochy ends it with a pro pass, but Martin missed two chance to double him in, one slim, one fat. He is usually a pretty aggressive cube handler, so perhaps he is just slow out of the blocks. The lesson to be learned here is that you have to be alert and ready to use that cube, right from the word go. Doubling opportunities can occur from your second roll of the game and you mustn't let them go by.

We'll take a look at the second game in the next post. It was long and complex, so be patient. It might take a day or three to do. Until then, enjoy the game!

I know that I must send the cube more often but I think I would have missed the two opportunities too.