If you looked at the previous post, you will remember that we are looking at a player who won seven games to six but lost the match 9-7. We'll pick up the match at 2-2, with Red on roll in this position. 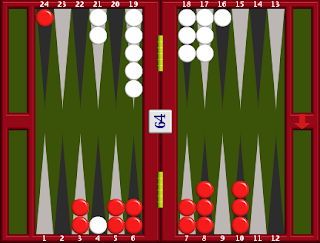 He trails in the race a little, 120-113, but he has some poweful attacking chances here. Would you double this? Unquestionably you should. Are you 100% certain that this is a take for White? No? Then turn the cube! Easy isn't it? The key to this position is not so much the number of wins and gammons that Red can expect from here (65% wins including 20 gammons according to Snowie), but the volatility. The time to double blitz positions is before they work, not afterwards and here Red is about to launch a powerful and gammonish attack with sixes, fours and threes. 5-4 escapes and Red's only very bad numbers are the non-hitting 5-5 (which is at least 20 pips for the race!) and 5-2. Sadly Red failed to double this juicy blitz and worse, failed to hit loose when he rolled 3-2. White breathed a sigh of relief and rolled 6-6, making two points and putting Red on the bar. Red fanned to leave this position with White on roll. 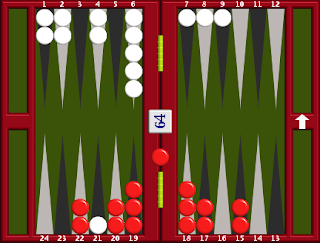 As White , would you double this? As Red, would you take? White leads 89-116, but he does have four blots, he has two high points open in his board and he still has one man trapped behind a broken five prime. White (me) went with the volatility, doubled and Red passed. Now this is interesting, because if Red owned this position, I swear that he wouldn't double, yet he passes! I was in good company cubing, as Snowie 3-ply will double this, but rollouts (Snowie and Gnu) show that this isn't yet a double and of course passing is awful. Don't think so? Play it 50 times owning the cube and you will be astonished how many different ways Red has to win, both when he enters quickly and later when White fails to escape. Don't forget that on average it takes White just over three rolls to roll a five and if he can't escape in four rolls his board has usually collapsed. These positions have an interesting feature that is often overlooked. Red will keep his block in position when he dances, but White has to keep moving when he can't escape. Cube ownership is huge too. Anytime Red can enter and White can't hit or escape, Red can redouble to 4. It's probably a take but it's no great bargain.
It can't be emphasised too often or too strongly; backgammon is a game of aggression and the most aggressive player is the winner more often than not. Ask any world class player which opponent he prefers, a cautious player who is timid with the cube or an aggressive player who turns the cube at the sniff of a gammon. You are only going to beat a better player if you get the luck, so make sure that when it comes your way you are winning more than one point.
Until the next time, enjoy the game!

this is very instructive for me, Pos 1 - with PRAT i can see that i should double, i will learn to trust this, but before (PRAT) this looks too dangerous even consider doubling

Pos 2 - i didn't know that the average to roll a number was over three rolls, this is very good information (i should have taken the time to do the math b4), it will change many of my decisions, i instictively have known it was hard, but that makes it much easier to see that the posiblility of you not escaping b4 your defense breaks down is better than i thought

thanks again for taking the time to teach ;), i think this should improve my play significantly

already gnu is agreeing with my cube decisions more than it has ever b4, i might even begin to like the cube

I just discovered your blog and like it very much! I have to say, though, that the better I get, the less useful I find Woolsey's law. For example, in your second position here, am I sure that it's a take? Certainly not. So Woolsey's law would say that it must be a double, right? But according to you, it's not a double. Woolsey's law is useful in practice because if you're approximately as strong as your opponent is, and you might drop, then your opponent might drop too, regardless of whether it's technically a double or not. But if you're trying to master subtle cube actions, then Woolsey's law can get in the way, by conflating psychological strategy with technical knowledge. Besides, I'm almost never 100% sure about anything, so if I followed Woolsey's law strictly, I'd be doubling way too early in every game...

Thank you Timothy, I know what you mean! Technically this isn't a double, but it's a mistake well worth making! You may get an incorrect pass, as in fact happened in the match and your opponent may not make the best use of owning the cube, which will increase your equity quite a lot. By far the most common mistake made by players below advanced level is to wait until the market is lost before doubling. Using Woolsey's rule will make you a more aggressive doubler, which will improve your results and also improve your learning. Why? Because if you find that your doubles are getting turned around a lot, you will learn and be a little less aggressive. If you wait until your opponent must pass, you learn nothing!