Back Games, the Myths and the Magic

"Do some articles on back games", is a request that I get more often than any other. It's an odd one in many ways. Back games are rare in modern play, as the first thing we learn about them now is to avoid them if possible! Putting right common mistakes in every day positions pays bigger dividends in the long run. Also, I just don't feel particularly well qualified to talk about a subject that divides players far stronger than me. However, backgames are fascinating, so let's take a look at some  facts and some positions.
What is a backgame? It's a game where one player holds two (or more) points in the opponent's home board and tries to keep them until the bear-in/bear-off stage, in order to disrupt that phase for his opponent, get a shot, hit it and win from there. This player is said to be playing a back game and the opponent is said to be defending against it. In the old days, better players wouldn't mind steering into these, because defending against the back game is very much harder than actually playing one. That ratio of difficulty hasn't changed, but the bots have revealed to us the shocking statistics of how (in)effective the various games are and most importantly how often they get gammoned. Still, the Mad Backgame Geniuses are not completely extinct, although the extent of their success is limited. It's sad in a way, because the games do have a beauty all of their own.
Now I know that as soon as I mention bots, a significant percentage of readers will mutter, "Bots don't understand backgames, so they play them badly". This is not a can of worms I intend to open, because I find discussion of what a bot can and can't do is tedious. Of one thing I am pretty sure though, which is that XG2 plays (and defends) against back games better than 99% of humans! If you disagree, open a thread somewhere else (other blogs are available) and discuss it there please.
There are eight different back games available of which two, the 20pt/24pt and the 20pt/23pt are so weak that they are not playable. The principle strength of back games comes when the two points held are fairly close together, which creates problem rolls for the defender. Points two or three pips apart don't do this. The 21pt/24pt game is also in this category I expect, but is for some reason much rarer and I haven't got any data on that. The 23pt/24pt game is also very weak unless you have enormous timing and the defence against this game is now so well-known and so effective, that getting that timing is almost impossible. I'll try to cover the main points of this game in a later post.
Now you will have seen that I used the T word there, timing. More utter rubbish is talked about timing than almost any other facet of the game, particularly by Mad Backgame Geniuses and I will try to avoid adding my share. Timing means being able to keep your backgame points and the strong prime that you need to win with after a hit, until very late in the game. This doesn't just mean until you first get a shot, it means keeping your position until the second or third opportunity. You can have too much timing and too little and timing is as important, perhaps even more so, for the defender. He should be trying to delay his arrival in the bear-in/bear-off stage if the backgame player is still strong and has lots of timing. The best backgame points appear to be the 22pt/24pt and 22pt/23pt variations. They create the most problems for the defender for sure and we'll look at one of these today.
Here are some positions from a backgame I defended against on GridGammon. The backgame player here has the 23/22pts combo and I have concentrated on the defender's plays. 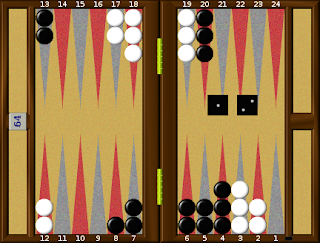 Black leads 4-1 to 7 and has 2-1 to play.
Before we discuss the play, we can note that Black has the best anchor and the best board and his only real weakness is the checker on his 4pt, which has no useful function in the foreseeable future and reduces him to 14 playable checkers. White has five checkers back, with the spare ideally placed on the higher of the two points. It's important to note that a backgame doesn't always start at the moment when the two backgame points are made. It's still possible for White to switch out of her backgame and given a good opportunity, she probably should, so Black shouldn't be too adventurous here. The best play is 8/5, not ideal when Black is really looking to prime, but all that he can do for the moment. The more adventurous 13/11, 8/7 is a small error, but close enough to give us a hint of the sort of thing that will be required.
White rolled 3-1 and played 7/3 and then Black has a 6-4 to play. 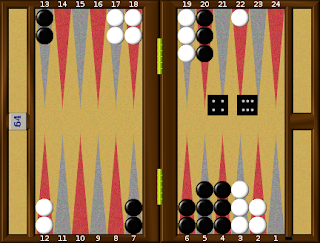 I played 20/10, which I think most of us would play in default of any better plan! It comes out best in the rollout but only by a very thin margin over 20/14, 13/9. Why would that be a good play? When those blots don't get hit, they are in good shape to make Black's 8 or 9pts to extend his prime. When they do Black goes backwards and slows down, improving his timing and thus weakening White's backgame. However, we are now on the cusp of the point at which White finally comits to her backgame, so 20/10 is probably minutely better.
One of the drawbacks to using my own games as examples is that occasionally you get to see a very horrible play. Here's one. I lead 4-1 to 7 remember. 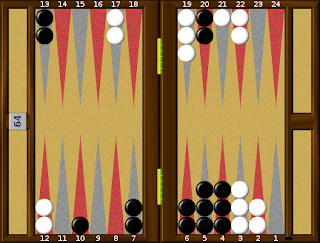 Black on roll. Cube action? For money I would say that this is a thin but reasonable double. White does have two very strong points but it isn't at all clear that she is going to be able to time this. She can take quite easily though, because of the two Black spares on the 5 and 4pts that are more or less out of play, so Black can't realistically hope to make any more prime points. At this match score, doubling is a huge blunder. White can redouble on almost any pretext, pushing Black into overage, killing his gammons, killing the cube and activating White's gammons as match winners. This is an X-rated blunder, not to be shown to children and those of a nervous disposition. Note too that White's play is going to be a lot easier than Black's, usually true for backgame players, so she will probably get closer to the theoretical equity than Black.
White took and then I rolled 5-4. 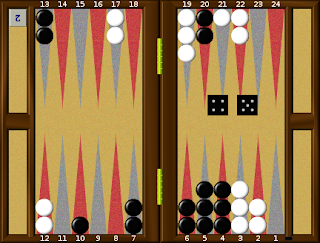 How would you tackle this one? While you are thinking about that, I'll go and get on with some other stuff, so come back tomorrow and we'll see what happened next.
Until then,  enjoy the game!

In the first position my play was 13/10, which appears to be a bit loose. The idea is to extend the prime and not worry about being hit. I didn't bother doing a pipcount first and now that I'm looking at it in XG I see that white's 51 pips of timing is already low, so I don't need to slow myself down.

As for position four:

My gut instinct is 20/11. I need to get the runners moving eventually, so why not now? If white hits one of the outfield blots it's an indirect hit so she'll still have a two point board with a blot in it - not exactly fearsome. And if I'm hit on the 20 point, probably the worst scenario is being forced to enter and hit giving white more timing.

White's timing is still not where it should be (57 pips if I counted right) so maybe I shouldn't be so eager to risk a shot.

The other downside of abandoning the 20 point anchor is that it gives white the opportunity to make it - as long as it's unmade, she'll have little hope of containing a hit checker. But I'm not seeing a good way to hold it without wrecking my mobility.

I'm surprised to see you describe the 20pt/23pt game as unplayable, because that runs counter to the information in Walter Trice's Backgammon Boot Camp.

But anyway, Position Four is a nice problem, and I'll probably get it wrong. As you pointed out in your discussion of the cube action on the previous roll, Black now has to be wary of letting White develop a gammon threat. So even though Black has a stronger board and White has a blot in her home board, I think that 13/8 is too bold a way to play the 5. Thus the 5 is either 6/1 (really, 10/1) or 20/15. Dumping behind White's anchors seems premature, so I play 20/15.

For the 4, I see three plausible candidates: 20/16, 15/11, and 10/6. 10/6 has the advantage of leaving the fewest blots, but the checker is somewhat out of play on the 6pt. 20/16 looks dangerous, giving White a double direct shot, but is often the right idea in these sorts of positions where White has a stripped midpoint and not a very strong board; White's 4's are duplicated to hit and cover, and Black typically gets a lot of return shots if hit. Also, if White doesn't hit, then Black's position is flexible and easy to clean up. 15/11 looks safer than 20/16, though it does leave the single checker on the 20pt potentially vulnerable to attack. White's hits automatically slot another home-board point.

White's got five back, a stripped position and three men rather too deep in his board for comfort. However his chances of going forward are good enough for a sequence like hit-dance-cover 4 to be embarrassing. It's between 20/11 and 20/15 20/16 for me because anything else leaves my anchor to get home through a hostile outfield. My gut feeling is 20/11 - his 5s and 6s help him by leaping out, while 3s and 4s are poor numbers, so better to leave shots on numbers that are already not bad.

thanks for this Dorbel as I'm one of the people who asks you about backgames - and "don't play backgames if possible" has been another great rule that i've found useful as a result of asking.

I would try 20/11 - especially with a blot in my opponent's home board.

This is a first-rate blog by the way.