I'm going to write all that I know about two point matches, but first, let me direct you to the comment on my last post from Timothy Chow. Timothy adds considerably to my theme and also alerts us to an unusual play of 6-5 in this position. 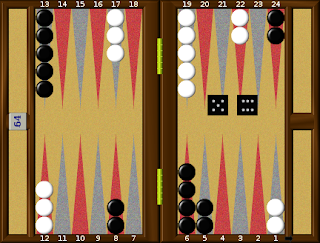 The "automatic" play here is 24/13, adding an awkward sixth checker to the midpoint and making no positional gain in a race where we trail by 6 pips. However the best play for match or money is the more adventurous 13/7, 13/8, unstacking the midpoint, putting two more checkers into the zone and bidding for a prime. A story goes with this, as I actually found this one for myself several years ago and eagerly looked for a chance to play it. I have seen it exactly twice since, once when I was at GammonSave where it is a small mistake and boring old 24/13 is a bit better and once at DMP where it doesn't matter much what you play!

Anyway, on to Two Point Matches and cube action. A fibster writes, "In a Seven Point match against a bot, we got to 5-5 and the bot doubled immediately and then rolled 5 doublets! Suspicious eh?" Well no actually.
At this score, it is technically correct to double at the first legal opportunity. Even if your opponent starts with a 3-1 which leaves you as a clear underdog, you should turn the cube, so obviously it is correct in every situation. Your opponent will always have a correct take.
To understand this, we need to understand why we don't double this early at other scores. It's because owning the cube has value and the longer the game has until the end, the more value it has. Once you have the cube, you only need to become a strong favourite (about 82%, less with some gammon chances) and you can cash the game. Your opponent by contrast has to get all the way to 100% to get his points. Owning the cube effectively shortens the ladder that you need to climb for victory. At 2-away, 2-away, owning the cube has no value whatsoever, so you can double anything where you have the advantage. "Aha", I hear you cry, "but if my opponent starts by making his 5pt, I am an underdog, so why double?" Because even if you roll your worst, probably 2-1, he should double next turn and you will still have a trivially easy take. This game is going to be played for two points whatever, so it may as well be you who doubles!
There is however one key word in all the above and that is "technically". Technically assumes equal players and correct cube action on following turns. In real life, a strong player playing a much weaker opponent may well leave the cube in the middle, in the hope that by doubling later he may get an incorrect take or pass from his weaker opponent and/or be able to play on for an undoubled gammon. To do this you need to be strong enough to be very confident that you will assess the cube correctly later and you need a considerable skill advantage over your opponent. If everything in this post is old hat for you and your opponent is about 250 rating points weaker than you, waiting to double might be your best option. If you are any other sort of player and/or your opponent is stronger than you, cube immediately.
So, was the GBot correct to double at this score? One weakness that Bots have is that they are not capable of assessing their opponent's playing strength and adjusting their cube action accordingly.  The GBot assumed that it's opponent was equally strong and on his turn would make the best play. A real life player of that ability would probably have played on and gained by doing so.
I write this in the hope that it will be understood and all the players who don't auto double on the first turn will begin to do so and thus win a little more often and thus have more fun, but they won't! There is a huge resistance to making a play that means that the match will end this game. That inertia is hard to overcome, so I guarantee that some of you will read this, even understand and agree with it and still when it comes down to it, not do it the next time they are at 2-away, 2-away! It's your life, live as you want to live!
Until the next time, enjoy the game!

as far as I can figure it wouldn't be difficult to program the bot to assess the human's mistakes in the match up till 2 away 2 away and judge the player's ability from that.

I do think you need to talk about market losers in the 2-point match. If the opponent starts 3-1 it is not wrong to double. But it is also not wrong to hold the cube. You have no market losers on any two-roll sequence. Granted, after your roll and play, opponent should double and you should take, but things happen. I have stolen so much equity from cube errors at this score by opponents.

So, I would amend your comments to say "At this score, it is technically correct to double at the first legal opportunity, if you have a market loser.

For readers who are not yet convinced, there is some further discussion archived at Backgammon Galore! See in particular Robert Koca's proof. Understanding Koca's proof requires some effort because his line of reasoning is clever and not immediately obvious. However, the logic is impeccable and, once you understand it fully, is completely convincing.