This is a roll that bots play badly, both Snowie and Gnu prefer to play 24/15*, 13/10. Martin knows better and takes two key points with this fine roll. 24/21(2), 6/3(2) has more safety and unstacks the 6pt, but the awkwardness after the match play is a price worth paying to get the 5pt. The blot on the 8pt isn't a great liability, as if it is hit Red will have four blots while White has a high anchor and a better board. Excellent play which the rollouts back up. 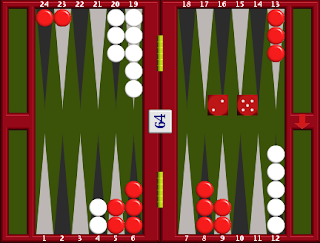 Mochy makes a small error here. It is slightly better to run out with 24/17 and not give White the chance to use his stacks for a blitz.The spare on the midpoint is very useful and worth preserving too. 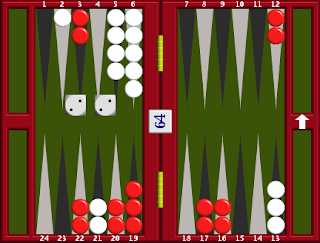 There is no gain from playing to the 11pt, it is just a blot on the landscape. That checker is just as useful and of course completely safe on the midpoint. 6/4(3), 4/2 is clearly best. Not sure what Martin was thinking of there. He has just made three consecutive safety-first plays, so perhaps he felt that he was going to have to take some risks to clear the midpoint. There has to be some gain from a risk though and there isn't any here. Best to lock down the four point board and wait and see what happens next.

No risks for Mochy. White leads in the race by 9 pips after this roll, but is about even in the game because he is behind a four prime whereas Red's anchor is behind a three prime. Not only that, leading in the race is a double-edged sword in these mutual holding games, because you may be forced off your anchor first and get attacked. Mochy keeps all his assets in place and makes a quiet play. 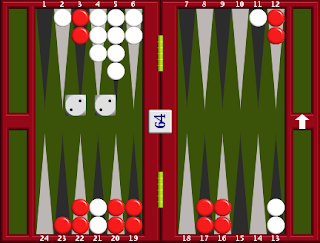 This is the play that I would have made, along with many others I expect. The bots however prefer 13/9, 11/9, 4/2. They do this because it gives Red awkward ones next turn, being unable to hit and cover without breaking his midpoint and a point in his prime. If he chooses not to hit, he usually has to break his prime. This sort of play is hard to find over the board but it is worth noting the circumstances that have created the opportunity for it. Red has TMP, too many points and has to break a point with every roll this turn. You can see that this is a condition to be avoided where possible and look for opportunities to exploit it when you see your opponent in it. The match play is a very small error.

Hard to sort these out and know what's best. Snowie prefers 9/7(2), a useful asset on later turns and easier to clear if White can escape and get into a bear-in. The match play is a very small error. 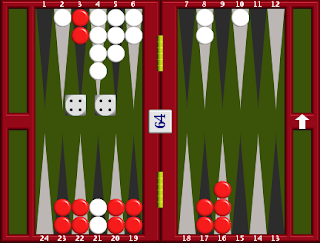 I don't think may of us would look beyond this "forced" play, but Snowie finds something very slightly better, which is 10/6, 5/1(3)! This creates a gap and buries three checkers which is the downside but saves two sixes and a five on the upside. This buys some valuable time for White, so that he isn't forced off his anchor. It also makes it harder for Red to run out next turn. Note that Red still has TMP and will probably have to break something somewhere next turn. 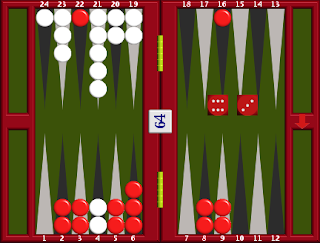 22/16, 6/3 is a very close alternate here, no indirect shots at he expense of losing a valuable builder.

Not a very good play from Martin, 5/1, 5/3 is clearly better, retaining a four point board. His play also kills his last two fives inboard and will force him off his anchor with a 5-3 next. The match play is a blunder costing about 0.12 ppg. 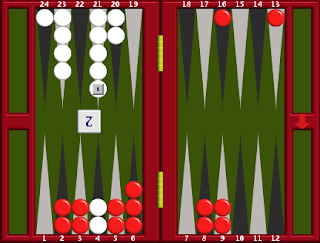 Mochy alertly doubles. Although he trails in the race by 16 pips, White's board has crashed and Red will have powerful attacking chances against the last two checkers. Red wins about 72% here, including 15 match winning gammons so this is actually a pass. The take is a blunder costing about 0.24ppg.

Mochy not tempted by thoughts of a trap play like 13/7, 8/7. In general you want your opponent to be completely crashed before trap plays become viable and White may yet manafacture a four or five point board.

4/1, 4/3 is better. Slotting is the way to build a board. Martin may be thinking, "I don't want a blot inboard if I hit a shot next turn", but for that to hurt he needs to get a shot, hit it with a number that doesn't cover and then be hit back from the bar. That's a pretty long parley, certainly under 10% here, so the rest of the time he will gain or break even from slotting. The match play is a small but clear error. 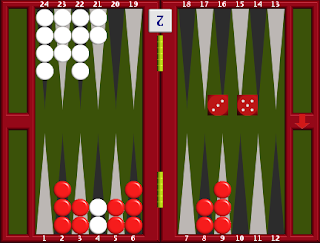 Good play by Mochy. Clearing the 8pt and creating three spares (8/3, 8/5) looks very flexible but unblocking fours is a big downside. The match play may look less flexible but it still has three checkers aimed at the 4pt if White runs with one. The blot on the ace point isn't a big liability and may even turn into an asset. 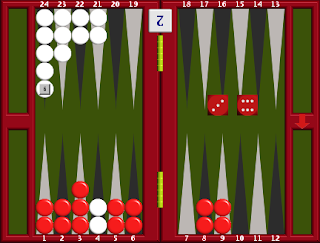 This play provoked a lot of discussion in the whispering gallery. It is probably correct and 9/3, 9/6 is a very close alternate. The match play creates larger attacking chances at the cost of being harder to clear when the attack doesn't materialise. Toss a coin. 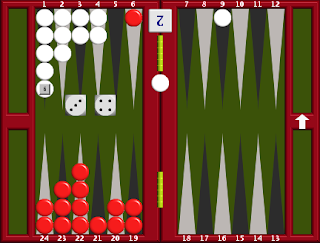 Perhaps the toughest play of the whole match. This play is right for money but wrong at this match score, even though it wins more often and wins more gammons! How can that be? The actual figures look like this. I have averaged Snowie's and Gnu's cubeless rollouts.

After bar/21*/18, White will win 66.85% including 4.8% gammons and Red will win 33.15% including 3.35% gammons. We can see that everything is pretty even except that the double hit wins nearly 3 more gammons. However the single hit is correct and by a large margin. To understand why, we have to know what White's correct cube strategy is holding the cube at this score. He wants to redouble any reasonable opportunity, to kill the cube, kill Red's gammons and activate his own gammons as match winners. He can redouble anything next turn as long as he isn't on the bar! He still leaves 7 fly shots after the single hit of course, but that is better than 11 after the double hit. Not being hit is the deciding factor here, to maximise his chances of shipping a strong cube next turn. Red needs a little more than 30% to take at this score.

What if Red dances again? With one man on the roof White will always have a cash. With two men on the roof he will be too good by a very small margin, so you can see that he doesn't need the extra risk of being hit.

Technically this is just too good to double, but to decide that over the board is almost impossible and a cash now is a good practical play, even though a medium sized error costing 0.067 ppg.

And now runnerup (White) leads 8-7 in this excellent match. The next game is the last of the match and I hope to post that next week. Until then, enjoy the game!