Race Cubes Are Not Always Easy.

This week I got knocked out of the Fibs Spring Open in the second round. Nothing new there of course, but the disappointment of losing was very much less than the crushing knowledge that I had played with all the tactical acumen of a fencepost. I got two race cubes wrong at the sharp end of the match and here they are for your edification. The first comes when I lead 6-5 to 9 and White doubles in the position below. What would you have done? 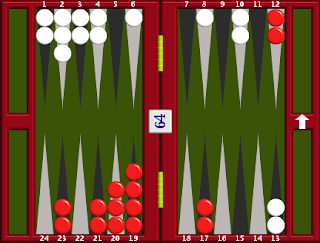 White leads in the race 72-83, 11 pips. In an pure race (one where both sides have equal distribution) then that is about 2 pips shy of a take. I mentally adjusted a couple of pips to allow for the fact that White already has two men on the ace point and decided to ignore his gap on the 5pt on the grounds that it would probably fill as White bore in. Marginal take I thought, so allowing for this being skill free and me leading and me thinking that I play better than my opponent (usually!), I passed. To my horror, snowie (and gnu) tell me that this is only a marginal double at best for White and my take is very easy! Let's dissect it a bit further to see why.
The first things to note come in the distribution. Not only does White have two men on the ace point, but three on the deuce as well and I should be allowing for the extra man there as well. The gap on the 5pt may fill, but not necessarily and if White has to play checkers to the 6pt it may be long lasting, with every 5 adding more checkers to the ace point. On my side, the gap on the 3pt will fill nicely from the fat 6pt and the gap on the ace point hardly matters at all. All this makes for a fairly easy take for money, but the big surprise comes when we look at the match equities for a four point match and see that I can take very late at this score! I'm sure I've known this in the past, but just let it slip out of laziness. Here's how it looks.
Leading 3-away, 4-away I can pass and retain a ME of 50%. If I take and win I go to Crawford, 4-away or 82%. Take and lose has me trailing 3-away, 2-away or 40%. Thus the take risks 10% to gain 32% and my cubeless take point is 10/42 or 23.8%. Clearly I can do even better than that if I use the cube correctly at some later stage, so I should be snapping this one up. A sad pass.
Lesson to be learned? Review late match take and pass points! I should have all these comitted to memory. Don't make snap race judgments about positions with unusual distribution.

Later I led 7-6 but White, having got the message that I was wary of race cubes doubled in this position. 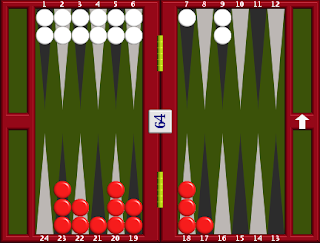 You can bet that I am going to be taking more time over this type of position in the future. I may still lose of course, but at least I can have the satisfaction of knowing that I played it right!

I think I would have taken both position easily