When should I think about doubling?

"When should I think about doubling?"
This question first came up for me in a seminar I gave before a BIBA tournament in the 1990s. The obvious anwer is "Before every roll of the dice", but that isn't very helpful and I was stumped for a moment. Mark Adkins provided the answer for me and it was, "Whenever something good happens!" Sometimes we can slowly improve in small steps until we are just good enough to turn the cube, but very much more often we arrive there in a sudden big jump because something good has happened. We hit a shot and the opponent dances, we fill in the prime or we roll a big doublet and when that happens, we need to raise a mental flag which says, "Something good! Cube?". Here's a good example of what I mean. 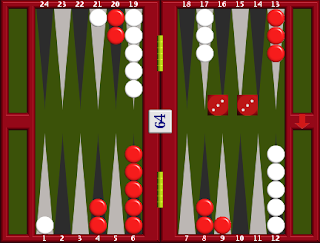 This is the first game of a five point match and Red has a 3-3 to play. He is already close to a double before the roll and if this comes as a surprise to you, consider these factors. He has a small lead 142 to 147, he has made two key points, the golden 20pt and his own 4pt, while White has done nothing except move a checker all the way from her 24pt to her 4pt. A double is a little premature but not actually far wrong. Now Red rolls 3-3 and fairly obviously fills the 5pt and the 3pt. White rolls 4-3 and plays 8-4, 6-3. She might also have played 13/6 and the more adventurous 13/10, 8/4 is also good (note the duplication of fives to hit), but for Red the "Something good has happened" flag needs to go up. He rolled a big number that filled two key points and White rolled a smaller number that only made one point. Note also that the idea of "a good roll" is deceptive; we need to think of sequences because your opponent always gets a turn after your good number that may modify it or of course nullify it completely. Then we have the position below with Red on roll again. 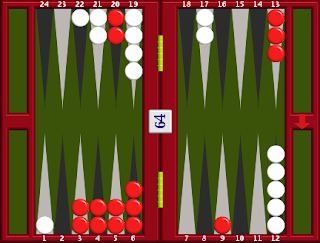 Now Red is much stronger, the best four point board, the best anchor and a ten pip lead and I am sure if Red had mentally flagged "Something Good" after his 3-3, then he would have been alert and turned the cube here, but sadly he didn't. He has already lost his market and this is quite a big pass.
For those of who for whom Market Loss is a new concept it is any sequence of rolls that mean that your opponent no longer has a take if doubled. Red has gone from not quite good enough to double to having a clear cash. Does this mean that he should play on for a gammon? Not in this case; just turning the cube and taking the point is good enough.
Now these positions are fairly straightforward presented on the page as problems and I expect that you didn't have much trouble with them, but over the board they took a decent player by surprise and he got it wrong. Because he rolled almost instantly, we can assume that it was lack of alertness that caught him out, so don't let this happen to you! When something good happens, raise that flag and think "Cube?"

I found this an excellent and instructive post..and * be alert after something good happens * is something I will remember. As a novice, this article was something I could grasp and understand