Do You Have A Flag?

Well, so now we are in good shape to play, how do we set about organising our thoughts in the actual game? I use a flag system to highlight danger areas and areas of opportunity. One of the great beginner mistakes is to see blots as dangerous, which of course they can be, but ignore other dangers which can be just as deadly and are often worse. The first of these that I want to address are STACKS. A stack, loosely speaking, is any point that has more than three checkers on it. We start off with stacks on the midpoint and on the 6pt and I want you to think of them as having a flag on top that says "Unstack Me Now". It often happens when we are looking for the best play that the answer can be found here, as correcting positional weaknesses is always good. This is why on the opening roll we can bring a man down from the midpoint and slot the 5pt with 4-1 or 2-1. Even though it creates two blots and leaves a direct shot, it is a level of risk well worth taking, partly because it puts the blots in useful places, but mostly because it unstacks the fat points. Why is having five (or more) checkers on a point bad? Because it equates to a lack of flexibility and reduced choices. Having ten of our men on only two points at the beginning means few oportunities to make positional gains and often means that we will have to make plays that are forced upon us through lack of choice. Bill Robertie, a master of the memorable phrase calls stacks "The Silent Killers", draining the life out of our position just by being there. 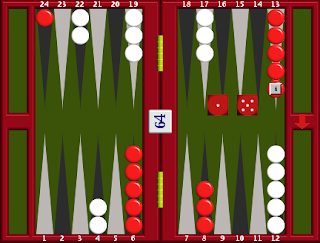 Here's an example from the opening. It's double match point, we opened 6-5 and played 24/13 (thus adding a sixth checker to the stack on the midpoint, but sometimes you can't help it!) and our opponent's 3-3 was played 24/21(2), 6/3(2). Now we have a 5-1 to play. I hope that you won't consider any play that includes 6/1. We need all our checkers available to play with, as the game is much harder when we only have 14 men to play with. 24/18 isn't a good idea, 24 shots straight away and no guarantee that we can get it safe even when it is missed. What to do? Well if we visualise our stacks with their "Unstack me now" flags it all becomes clear. The flag on the midpoint is waving urgently because now we have six checkers there, so 13/8 with the 5 and 6/5 with the 1 to unstack the 6pt! It's as easy as that. Actually here, 24/23 with the 1 isn't bad and might be chosen by somebody scared of leaving a blot, but slotting the 5pt is very slightly better.
Now I can hear the objections, which can be summed up as, "Why leave a shot when you don't have to?" The answer is that risks are worth taking if there is something to be gained. Balancing these risks and gains is the key to good play. Here, we risk being hit on the 5pt, but the gain from unstacking the 6pt is worth it. It's bad to lose 20 pips of course, but White will have to leave his anchor in order to hit and some of the hits are numbers that play well elsewhere, notably 3-1 and 6-1. When he misses we have a great chance to make the 5pt or in some cases play a two with the blot.
Put these flags on your stacks the next time that you play and see if they help. They usually give us a good idea of what we should be doing next.
Enjoy the game!
Posted by dorbel at 08:49