Well the last post engendered an overwhelming response of precisely zero comments. No doubt the fact that it was dull, badly written and featured a not-very-interesting position had something to do with it. Let's try and do a bit better on the same subject. The title by the way, "Do You Have A Flag?" was inspired by Eddy Izzard, go to http://www.youtube.com/watch?v=hYeFcSq7Mxg&feature=related to get the idea.
So, flags for stacks, take a look at this one. 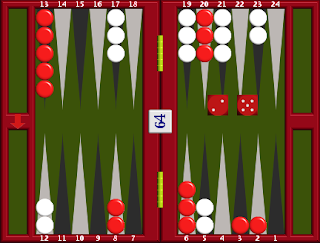 It's 0-0 in a match to 7 points and Red has a 5-2 to play. He is a beginner and chose 20/13 and it was my job to explain to him why this was not the best play. "It stacks an extra checker on the midpoint, which is bad" was my response.
"Yes, but why is it bad". Reasonable question, why is it? Stacks are bad because they concentrate a high proportion of your checkers in one place, making your position less flexible and harder to improve next turn. On roll here and trailing by 40 pips, Red has four points made with spares on three of them. If he plays 20/13, he now has spares on only two points, thus giving him fewer choices next turn. Clearly making the bad stack on the midpoint worse is not the way to go.
The point of having our "Unstack Me Now" flag on the midpoint is to save a lot of thinking. That's the place that we need to play from and 13/6, or conceivably 13/8, 6/4 is the way to go. While we are at it, how about 13/8, 3/1? That leaves us spares on four points, which is definitely good, but buries a checker on the ace point, which is definitely bad. Why is it bad? Because it reduces our playable checkers from 15 to 14 and reduces choice in the same way as a stack does, but worse, because that checker can never go anywhere. You can turn it into a small asset by making the point of course, but that cuts us down to 13 playable checkers!
Experienced players will look at positions like this and see that stacking another checker or burying one is bad just by instinct, but it is a learned instinct. The point of the flag on the midpoint is to give you a short cut to the place from which your play should usually come. It doesn't replace thinking of course, but it may save a bit of mental energy.

The same player faced some more unstacking problems in the next game. here's one of them. 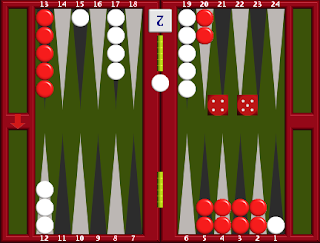 In the last game, Red was getting the worst of a positional struggle of the type known as a mutual holding game, where both sides held high anchors and improving position was the over-riding aim. Here Red has doubled early and has White struggling to survive, but Red must still look for positional improvement and the "Unstack Me Now" flag still flutters from the top of the midpoint stack. Red will hit with the 5 of course, but which 4? He played 20/15*, 20/16, getting those back checkers moving and of course playing with complete safety for this turn. It's not a bad play, there aren't many bad plays when your opponent has two men on the bar against a four point board, but he can do better and 13/9 is the best 4. Not only does it unstack the midpoint, but we can now find a use for two more auto signals that I find very useful. I like a neon arrow, flashing and directed at the point that I want to make next, which here is clearly the 6pt. Obviously a checker in the outfield to hit there if White manages a 6 from the bar is good. Not only that, but the entire outfield needs a large VACANT sign. Red has no points there and this is always a weakness. Making any point there will improve Red's chances of coming home safely, both to act as a safe landing point and to provide a reservoir of checkers to hit on and/or make 6pt.
Flags, neon arrows, VACANT signs, all help me to keep my attention on the essentials. Helpful to you? Let me know. Until the next time, enjoy the game!
Posted by dorbel at 07:13

Yes, your columns are very helpful. I've been reading them since you published them on fibs, and I enjoy them very much. Thank you.

Like the last column, this one is a clear, correct (as far as my intermediate level can determine), and fairly complete.

Not much to add, other than to observe that there must be situations where one must ignore the flags & neon vacancy signs. An example to demonstrate this (and why the flag should be ignored) would be a helpful next column.