In a comment on my last post, Ah_Clem points out the omission of positions where unstacking is wrong. This is of course fair comment. However, I think that if challenged he could easily produce a list of occasions where other priorities are greater for himself. 6-5 in the opening usually stacks a sixth and even a seventh checker on the midpoint. Hitting a blot, or making a useful point, or safetying a blot can and usually are important enough to leave the stack in place for the moment and of course we often roll a number that can't unstack without leaving a vulnerable blot anyway. What the flag is doing is serving as a reminder that we have a glaring positional weakness that needs to be dealt with urgently. It can't replace thought! Usually, more important goals like the above will be obvious, but the flag will help us when the answer isn't clear, not infallibly I agree but even when it is wrong it won't usually be wrong by much. 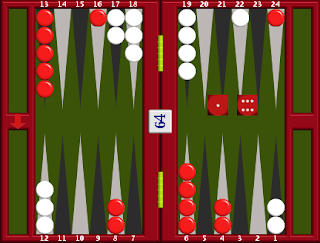 This is the start of a three point match with Red to play 6-1. 16/9 is an obvious play, but I liked 13/7, 8/7, unstacking and making a useful point. Actually, it is probably slightly inferior, losing a few more gammons than the alternate, but there is no way to know that over the board, so following the flag saves you wasting mental energy trying to puzzle out the best play, energy that may be better expended later. Even if I could play God for a moment and know that 16/9 was very slightly better theoretically, I might still choose to make the bar. Why? Partly because making the bar gains a clear asset, partly because I think White's play will be slightly more difficult next turn. In general, I like to complicate things, although as White is a bot here, that's probably not a good idea!

Because stacks have this need to unstack themselves, they should also carry a second flag warning the opponent, "Danger! Unstable structure. Do not approach". Stacks are very bad at building primes but they do just fine for hitting and blitzing. Here's a case in point. What would you do as Red here? 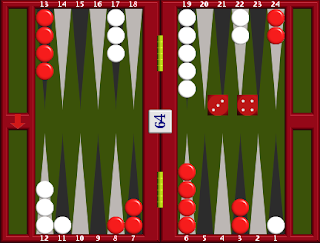 White's position has a non-obvious weakness here, which is the stack on the 6pt. Those checkers are just dying to get into the game and as the 3pt is already made, they really would like to go on the 5 or the 4pt. If Red, as actually happened in the game, makes the mistake of moving to either (or both) of those points, White will be delighted to hit. If Red stays where he is, White will have to try and develop them more naturally, something that stacks are just not good at. I'm not sure what the best play is here. 13/9, 8/5 is feasible and probably outranks the similar 13/10, 8/4 because it slots a better point. 8/4, 7/4 could be best, swapping the bar point for the 4pt and of course strengthening the board. However, I do know that anything that splits at the back is a big blunder. Don't give stacks the chance to fall on you!
More to come on this subject, but until I find the time to write the next bit, Enjoy The Game!
Posted by dorbel at 03:25