Even More Is Possible Sometimes 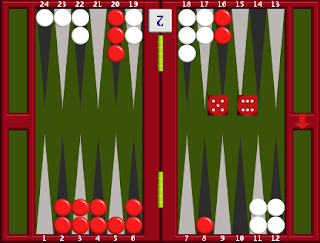 The score in the position above is Red 1 White 6 to 7 and it is of course post-Crawford. What this means in practice is that the cube is dead and the gammon threat is one way. Winning a gammon here is hugely important for Red, effectively getting him to DMP and losing one is irrelevant.
As in the previous position the More Is Possible flag is up and the score is shining a spotlight on it, not to stretch the metaphor too far! When this play came up I made the "obvious" play of 20/9, as I expect many would have done. Snowie analysis preferred 20/14, 20/15, which was startling to say the least! What, give up the golden anchor and leave three blots? It's pretty obvious that White isn't going to mount a blitz if she can help it, so the blots are fairly safe for the moment, but where's the gain? It works like this.
Positions where you hold an anchor in your opponent's inner board and a point in her outfield (more usually her bar point) suffer from two major flaws. The first is that they don't produce anything like as many shots as you might think and the second is that it is very rare to have the timing to keep both points for as long as you need. When you have to run from one of them, the opponent can often hit her way home. Here the race is relatively close, 112-123 after the roll, so Red definitely hasn't got the timing to keep them both. It makes sense to break one now, while White can't take the risk of hitting and the 20pt is the one to break! Why? Because if you keep the 20pt, then it won't pose any great threat to the White checkers on the 8,7 & 6pts and White can run the lesser risk of leaving indirect shots on her 13 & 14 pts. If you keep the 16pt, then White will face the herculean task of safely clearing her four rear checkers against an anchor perfectly placed 6 pips away.
It's rare to see a play that can be described as brilliant, but any player who made this move over the board is probably world class. When I first rolled this out some years ago, I did the rollout with Snowie 3 and it made 20/14, 20/15 clear best, with 20/9 a blunder. However Snowie is not ideal for this as it doesn't roll out keeping the score in mind and a recent Gnu rollout shows that the two plays are in fact fairly close, although 20/14, 20/15 is still best. Anybody like to run this through ExtremeGammon? Incidentally, yes I did think of 16/5 and it isn't a large error, but it can't quite match the other plays, as it gives up what is clearly the best anchor.
I hope that this has demonstrated the usefulness of the MIP flag. These oportunities to find an exciting and effective play come up fairly frequently, so let me know if you come across one IRL. Until the next time, enjoy the game!
Posted by dorbel at 00:31

The best move is so unusual, because backgammon is a straight forward game. You can only go backwards, if you recirculate a checker (Danny Kleinman called it also recycling). We are trained to think on recirculating checkers in backgames. And we never resolving the deeper point of a backgame first. So we have several issues: our rules of thumb and the requirements of the position. We have to be openminded to see, that the timing is delicate, and that the blots, we leave, will transform in an asset. Leaving the rules of thumb behind is going over the rubicon towards to victory.

A 4ply gives an almost deadrace.

Deadrace. I learned: sometimes the bizarre is as good as the common sense. And we know little about this game. But commen sense is pehaps not a blunder.

If this is the Crawford game, what is White doing holding a 2 cube?

I think you meant to say that "it's obviously post-Crawford".

Post-crawford is for sure (funny, i thought i had read so until your comment). But, ah_clem, more interesting is the XG-rollout. Is it possible, that two totally different game plans can lead to a deadrace? Or must one of the moves be, when not be a wide margain but significant, inferior? Or rephrasing, can this position be played so or so? How can we translate the results in meaningful human language? Its is a remarkeble position, and i wonder, what Kit Woolsey would have said to it.

Thanks Clem, text corrected.
It is fairly common for two entirely different plans to pan out much the same. I definitely prefer the 20/14, 20/15 play because it looks great and is certain to lead to complications. Can't say that I would have found it over the board though, in fact I didn't! This is from a real match.

The problem with rollouts is this. You can set a bot to rollout two competing playsa position and of course the higher the settings that you use and the greater the number of games, the more likely you are in theory to get a correct result, but only if the bot understands the position in the first place! If it is making a sizeable error early on (i.e within the next two or three rolls)with one of the plays but not with the other, then the end result can be wildly off.
I think this position lies outside the range of positions with which the bot (and of course humans) are familiar and even the best rollouts may be misplaying it. I'm not saying that they are, only that they may be.
What I can say is that in my own judgement, the weakness of the Red position is that he has five checkers in defensive positions and lacks the timing to keep both anchors. He has to break an anchor and he won't get a better chance than this to do it. For me, the 16pt anchor is clearly the one to keep. I like 20/14, 20/15!
Rollouts are interesting and usually correct, but I would be more interested now to hear somebody's own personal thoughts on why they like one play over another.

this is funny position. Today i did a mental workout, analyzing the possible moves. The breaking from behind move came out as the winner, because he is good in all four directions of our grand theory, spelled out by Bill Robertie: efficiency, conectivity, non-commitment and robustness. The full analysis are three Din A4 pages, with references. If there is an interest, i will send it to your email adress as pdf. Is it in your profile on fibs?