I'm on a bit of a losing streak at the moment and at these times, it's always good to keep a close eye on the blunders, the plays where one gives away a lot of equity. If you start to see where the big mistakes are and more importantly, why you made them, you can begin to put right the faulty thinking that led to the mistake in the first place. Here's one where I could have done better with a bit more attention to detail. 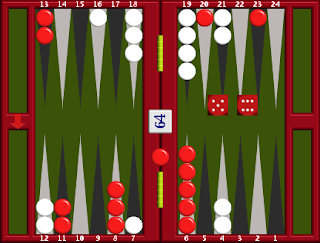 I lead 2-0 in a match to five, I trail 148-170 in the race and I am on the bar. The roll is 6-5. of course I enter with the 5 and look round for a 6. It hits on the 7pt and without much more thought, that's where it went. This is a fair sized blunder.
Hitting is usually correct when you trail in the race, so why is it wrong here?
Hitting has several drawbacks. The first is that it doesn't achieve all that much. It only costs White 7 pips in the race and Red doesn't have either a board or a prime to contain the blot when it re-enters from the bar. When the play "works", i.e. when White re-enters and doesn't hit one of the three blots lying about, it still doesn't gain much because the bar point isn't particularly valuable here.
The second big drawback is that it means giving up Red's midpoint. With both players holding a high anchor after this roll, the mostly likely game type is a mutual holding game, where both sides struggle for positional supremacy and try to build points. The midpoint, controlling the outfield and providing a useful landing point for checkers moving from back to front, is vitally important.
It's so important that White on her turn will be very reluctant to give it up in order to hit, so playing 23/17 is relatively safe and that is Red's best play. 8/2 is as bad as hitting.
Of course 23/17 doesn't achieve much either, but it makes a position with only one blot which is nice and keeps the vital midpoint. These quiet plays are hard to find, as we are conditioned to "do" something, to make things happen, to hit and be aggressive, but sometimes quiet is good and a bit more thought here might well have led me to a better play. It's bad to make mistakes of course, but it is worse to make them when you just haven't thought for long enough!
Until next time, enjoy the game!
Posted by dorbel at 10:07

With a little help of my friends.

Grand Theory. I stop from time to time to pray my sutra: efficiency-connectivity-non-commitment-robustness. If a candidate apparently violates against my sutra, it is time to watch out. Connectivity: “Connectivity is a measure of how close-knit your little army is. A connected position is one in which all checkers are no more than six pips away from some other checkers. In connected positions, checkers both guard each other and serve as landing spots for rear checkers to advance. The more connected your checkers are to their fellow checkers, the better. Well connected positions mostly generate other well-connected positions automatically. Poorly connected positions have to be brought together by rolling well. ... The vital idea is that it’s good to have your checkers working together in a small area. ... Maximizing connectivity means minimizing the numbers of stragglers and their distance from the main body of troops. ... Later in the game, connectivity plays occur in more critical and delicately balanced positions. The alternative to connecting checkers may be a play which makes tempting progress in another direction, hitting a blot or making a key point. Nevertheless, these assets must always be balanced against the very real asset of making a connected position. ... “ (arigatou gozaimasu, master Bill)
The straggler on the 23 point doesn’t work. But it is important for our little society, to get all of his members to work. The midpoint checkers are working. They connect our position. By now, we have 3 members of our society in the rear position to fly out. The midpoint has to stay, working as an air-lift. So little straggler, move forward, perhaps with a little help from your friends.
Non-commitment. It is the ethic imperativ of our little backgammonworld. It means: act always in a manner, that the numbers of your choices will grow. Are we doomed to a holding game? Even the silver point can pose a target for a prime. Let us look at the prime-fields (arigatou gozaimasu, master Danny). Our prime-field goes from point five to point ten. How much seed do we have for our hedge? Plenty. Only the three spares on the 6 point are a little bit frontloaded. But our little straggler has to hurry up for working in the garden.
And now to the prime-field from white. We nailed down the goldenpoint for good. So his hedge can grow from point six to point 11. He is doomed to a holding- or running game, because already 5 checkers can no more be part of the hedge. And soon the blot on the 9 point has to declare.
If we move our straggler in the outfield, white is forced to declare the outfield. We have passed the buck. Now white is under pressure, to put his position together, which looks now very brittle with a frontloaded position, two blots and a stripped midpoint in the outfield.
Sometimes it is good to remember your friends and simply try to join them.

The comment in the last (even more is possible)isn't to verify. So here, Mr. dorbel.

This position is after a deep examination even more stupendous. In short. The race is not to neglect. Black is gammon go, white is gammon save. White is outboarded 4:2, with blots 1:2. Four candidates: breaking from behind, delay, breaking from middle with play from golden point, breaking from middle with boardbuilding. White is now week, black is now strong. When we regard the little 3 prime from white as what it is, a bunch of spares, then a delay will end likely with a stronger board from white and a weeker board of black. Breaking from middle sacrifies connectivity and tears the army into two pieces, this play commits to the holding game. A gammon brings black virtually to DMP. So now is the hour to saddle the horses and go to the o. k. corral to force maximum contact. The three gunmen are backed up by the anchor in the outfield, their weapons are aiming in both directions (board blots and teturn shots in the outfield). So this play is like a quarterback throwing the bomb, and the chances are very good to complete the pass. It is efficient, because it is tailoring the risk for what is needed, it looks for connectivity, it does not commit to a holding game, and it is robust, because it creates new spares to hold the strong board. I never saw blots, so proud and working so hard. After all, breaking from behind is my winner, and I would be glad to play this for a prop against the delay play.