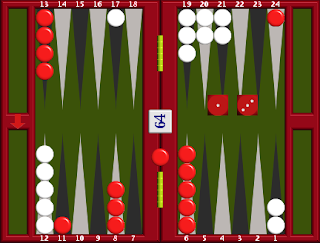 Once your opponent has made her 6, 5 and 4 points, you can expect a powerful and gammonish cube pretty soon, particularly when, as here, she has put you on the bar in the process. This is particularly true at the start of a three point match, where the initial cube is more powerful than usual and you often have to pass cubes that you could take for money. So, I rolled 3-1. What would you do with this?

I played bar/24, 13/10, a gut instinct play that responds to blitz fear, i.e. I'm in trouble here, let's anchor and try to ride it out. Unhappily, this is a very weak play, a large blunder. Easily the best play here is bar/22, 24/23 and if you played that (and would have played it over the board) well done, great play! Can we see why this is best?
White has achieved this powerful little block using only checkers from the 8 and 6 points. This is of course very efficient, but it leaves her short of ammunition to continue the attack, so stepping up to the best available points is not as dangerous as usual. However, no need to come under the gun, even such a small gun as this, unless there is a point to it, so why should we make this aggressive and risky play, rather than just anchoring? It's because White has left herself with five checkers on the midpoint and one on the 8pt, a notoriously weak formation that is difficult to develop. If Red plays bar/24, 13/10, then White can either hit one of the outfield blots or bring checkers down from the midpoint to strengthen her forward position. Playing bar/22, 24/23 reduces her chances of hitting in Red's outfield and increases the coverage of White's outfield, forcing contact and action now rather than trying to postpone it until later.
Don't like this? Set up the pieces and play it a few times. The difference between the two plays is so large that you should see better results from the aggressive play very quickly. Note that White should double any play and Red should take, even if he has made the weaker move. Before computer programs arrived to take the strain out of rollouts, we used to do them by hand, ideally with a friend to ease the labour and provide idea input. Our rollouts were not very accurate in terms of results, but we did learn how to play the position, something that we lose when we use the bot to do the work. Give it a try and until the next time, enjoy the game!
Posted by dorbel at 01:57

The veterans stated before the bots, if you own the defensive ace-point you are in the game forever. But one of the surprising experience made in the beginning playing against jellyfish was, that this tiny little creature could almost never pinned into an ace-point game. Jellyfish invented the split. And Woolseys Cube Reference Positions showed for the most part, ace point games simply aren't takes. So now is the hour to get back into the game and build an advanced anchor, before white can get another men at the line of scrimmage to complete the down, getting over the 20 yard line and ship it over. It simply takes to much time to put an offense together for a stand. So red must try to get a stand with the defense.

I don't like sitting on the ace point, and stepping up to the edge of the prime seemed right. I leave the checker on the 24 because it gives more chances to make the anchor and doesn't place two checkers "under the little gun" (meaning two builders in range - "under the gun" is three or more builders.) and 11/10 is the only other reasonable thing to do with the one.

As you say, it duplicates 6-4, but no, that isn't enough. The point of making the action play of 24/22 is to maximise contact, so 24/23 is thematic, as it provides more coverage of the outfield and puts more pressure on the blot on the 8pt. The duplication of 6-4 is a bonus.
Duplicating your opponent's good numbers is of course something to watch out for, but the virtue of diversifying your own numbers is neglected, not sure why that is. If you play bar/22, 11/10 then you duplicate your own 6-4 next (with which you really want to make a bar point anchor)and don't create anything new, as 6-3, 5-3 and 3-1 are already point makers.
Playing 24/23 has another small benefit. If the opponent makes the 3pt on your head, you have the 23pt slotted, a better point than the 23 and 12 numbers to make it rather than 11 if you stay on the ace. It all adds up and 24/23 is clearly superior to 11/10, as confirmed by a rollout.

sorry, I meant "better than the 24" in the penultimate sentence.