In my last post I concentrated on checker play in the face of a blitz, but I also remarked on the correct cube action and said "Note that White should double any play and Red should take, even if he has made the weaker move". Here's the position again. It's 0-0 to three. 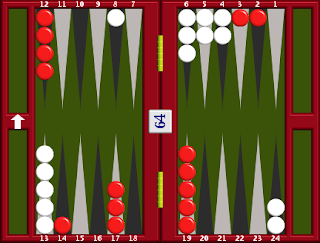 It's fairly easy to see that this is a strong double but a lot of players would pass this, so what makes it a take? Assessing game winning chances and gammon losses in blitz positions is very very hard. There is no magic formula that combines all the features of the position in a way that can be converted into maths, so in the end it comes down to instinct. However, instinct can be informed, so what do we need to look at here? From Red's point of view, he won't be on the bar after the play and although he has yet to make a point, all his checkers are in play and reasonably well placed to make points soon. He is only 5 pips behind in the race after the roll. Looking at White's position, we can see that 6-5-4 block of course and the strength of that can't be overstated. It's immense, but looking at the rest of White's checkers it is actually all that she has got! As noted in the last post, she has the stack on the mid and a slotblot in the outfield and watch out for this, it's a very weak formation. You usually can't help getting into it, but once you have it needs to be repaired and soon. Also, crucially perhaps, White has yet to move her back men. If her back men were split, or if her outfield checkers were less fragile, then the take would be very tight and it would probably be a pass for Red if he made any but the best play from the bar.
So, that would be my instinct and Snowie analysis backs it up. Not a pleasant take, but correct, even at 3-away, 3-away, where we need to be more conservative than usual with our takes.
Doubling blitz positions is a lot of fun for the doubler of course. They are very volatile and in one sequence the defender's game can collapse into a gammonish heap. The play is usually a matter of bashing anything you can see and going for a closeout, with the difficult play only coming after you have had one or two checkers hit. One thing I have noticed though, is that several successful blitzes leads to over confidence and the cube in subsequent games gets earlier and earlier! Here's a good example of one. 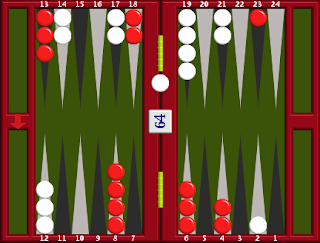 Red (me) is on roll and the score is 1-1 in a five point match. I doubled this, what would you have done? White incidentally is a Fibs GammonBot, so Red isn't entitled to add any vig for the chances of an incorrect pass. Mind you, a pass would be fairly horrid here, as the double is a blunder. Let's take a closer look to see why.
Apart from the White checker on the bar, her position is actually a bit better than Red's, with the 11pt made and only two checkers back. The race is even. So, Red is doubling on threats and against a human opponent that might be reasonable. We all get a bit nervous off roll with a checker on the roof and I have seen positions like this passed before now. The trouble is that Red doesn't have checkers in position to be very threatening. What this position lacks is volatility. Red has quite a strong game that should develop nicely over the next few rolls, but he is unlikely to make the sort of great leap forward that will lose his market on the next sequence.
After I doubled and White took, I then rolled 2-2. Having fundamentally failed to understand the position, it's no surprise to see that I then blundered with this excellent roll. Take a moment to choose your play in the position below. The score is 1-1 to five. 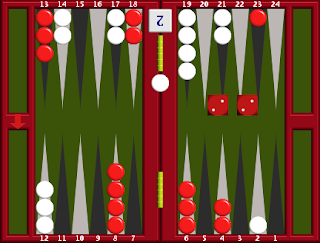 I chose 13/11, 8/6, 4/2*(2). This wasn't a careless play, I thought, "Put a second checker on the roof and bring down another builder", which seemed reasonable at the time. However, switching points isn't really viable, because I just don't have the ammo for the blitz. Granted I have brought another checker into the zone, but at the considerable cost of giving up my 4pt. What I really need to do here is import a lot of extra ammo with 13/11(3), 8/6. After that excellent play (and kudos if that is what you selected) then I suddenly have 12 checkers ready to blitz or prime as the dice decide. This is so much more flexible than my play, which comits heavily to the blitz plan. Midpoint fans will hate to see it go, but owning your opponent's bar and your midpoint concentrates too many checkers in one segment to be flexible. One or the other has to go and here it is the midpoint. This is quite typical. Look out for this combination and get ready to dismantle it; the two points don't combine well to cause trouble for the opponent and the checkers on the mid are usually more use somewhere else.
The last thing that needs to be said about this disastrous sequence is that you need to be particularly careful not to give away the cube to a savvy opponent at this score (4-away, 4-away). Your take point on a recube is about 32% cubeless, so any time White gets to be a favourite here a recube is in sight! Didn't know that? Then that alone is enough to make reading this blog worthwhile, so until the next time, enjoy the game!

The knowledgeable Rick Janowski points out that this is in fact only just a double and for money would be incorrect. This is true, but the point is not that White loses a lot by not doubling, but that she has a strong position whether she doubles or not. However, I agree that my text exagerrates the strength of this double, passing would be a large blunder. 26% gammons, which is what Red loses here is definitely scary though.