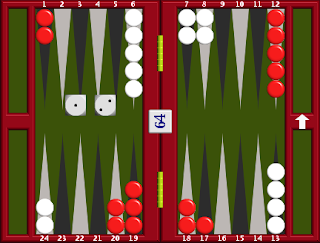 Martin makes a big blunder with this roll. He is already in some danger of being primed on the other side of the board, so he makes a play that aims to diversify and build a prime of his own. Actually if he wants to do this, 7/5, 6/5 is better. Owning the 5pt with the bar slotted has to be better than owning the bar with the 5pt slotted. However, the whole plan has a basic flaw, which is that even if he isn't hit, he will always be playing catch up. Red either hits or brings down builders for his own prime without much danger. What White needs to do here is to take advantage of Red's temporary shortage of builders and split at the back. 24/21 or 24/23, 13/11 are both much better than the match play but best of all is 24/22, 24/23. This puts the most pressure on Red's slot and has the best coverage of the outfield. This is similar to a position that I posted on Sep. 15th, take a look back.

This is a reasonable play from Mochy. The bots have trained us to run out in this sort of situation and take our chances there, rather than be attacked inboard, but 24/21, 13/7 may be better. The 21pt blot isn't in much danger and 13/7 adds a very useful checker to the attack zone. Snowie plays that and the rollout suggests that it is marginally better. 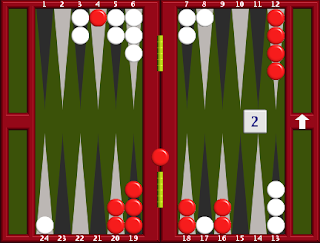 White on roll, Red on the bar, race lead, threats and a better position, so a mandatory double and another tough cube decision for Mochy. However, although he is on the bar, he has a few things going for him here that he didn't have in the first game. He has a broken 4 -prime of his own, he only has two blots and very importantly, White hasn't made his 4pt yet. Owning 6-5-4pts is much stronger than 6-5-3 and I think this may have been the key factor that got Mochy to take. Snowie makes this a close pass, so not a very bad decision, particularly as it is a high skill position with a long way to go. A technical error, but in match play a marginal take/pass.

I like Mochy's play here, but bar/24, 13/11 is probably equally good. It diversifies nicely in Red's outfield and the extra blot doesn't make the position much more gammonish according to a rollout. 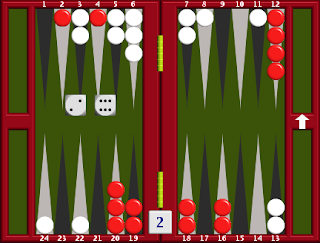 Excellent play. Most players are reluctant to leave 2 blots inboard, but Martin is an expert and makes the play most likely to win and the most likely to win a gammon. It leaves 21 shots from the bar but 11/5, 6-4* leaves 20 and only puts one man up, no contest. 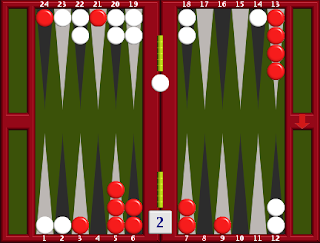 Red has a very strong double here, in fact he may well have been in the window on his previous roll! Mochy certainly thought about it. With 4 blots on the board and a fifth on the bar, this position is about as volatile as is possible. Moreover every single Red roll plays well. The worst is probably 5-3 and even that makes a third point inboard and puts a second man on the bar! I mark this as a marginal take/pass for White, but over the board I would have happily scooped. Food for thought for all of us and a very instructive position to practise with. Red rolled... 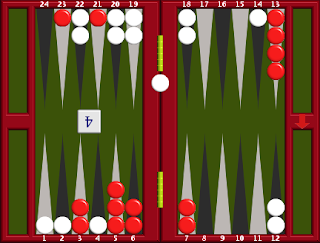 Clearly Red has improved a lot and doubles. As White had a marginal take last time he should pass this, but Mochy's "wait and see" tactic pays off big time and he gets a take! Large blunder from Martin. Five blots including the man on the roof makes this far too gammonish for a take.

So, what happened next? Join us later in the week for the rest of this great game.

Interesting commentary. Is there a reason why the cube stays in the center of the diagram with the double and re-double?

Yed, bad editing, I'll see if i can fix it! Thanks.

The last diagram seems wrong. It is the same as the preceding one, with the last two moves not yet played.

Thank you anonymous, more bad editing! I have put in the correct diagram.