Not What, But Why

Like many other keen players, I run all my matches through a bot for analysis while the match is fresh in my mind. I don't look at every play, or even every error, but the blunders (mistakes that cost more than 0.11) do get looked at. Once I've checked them and satisfied myself that the bot is likely to be correct, it is vital to try and understand the position and how I could have avoided the mistake. Take a look at this next one and you'll see what I mean. 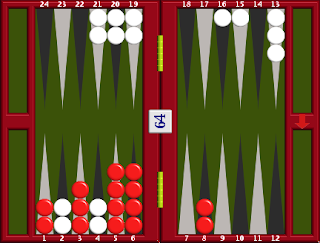 Here I am playing the Red checkers and leading 5-4 in a match to 9. It's a fibsleague match. I think about doubling, but don't. In fact this is already a pass according to Snowie and Gnu and failing to turn the cube is a major blunder. How did this come about? It isn't at all clear that White should take, so by Woolsey's Rule alone I should obviously double. Moreover, there is a very handy rule of thumb for deciding when to double backgames. When you are threatening to clear the third last point in front of a well timed backgame, you are probably in the doubling window. With hindsight I know why I didn't cube here and it's an old failing; I tighten up with the cube when leading in matches that I am very keen to win, particularly when I am playing somebody that I think is not playing well. I drift along, hoping that the match will somehow win itself and tend to be pessimistic in exactly this sort of position. What I should do here is ship the cube in and put the pressure on White, because clearly in this position she would prefer not to have to make a cube decision. It's more or less what I call a 60/40 position, 60 wins including 40 gammons.
Some key points to note: I have lots of spares at the moment, so I can handle all the non-clearing rolls, except 6-1 of course. These spares are very important and when I begin to burn these, my position will get weaker. On White's side she has the nice 6-5-4 block in place, but her other checkers are awkwardly placed, although of course her frontal position should improve. it's important to recognise this "I'll get weaker, while she'll get stronger" scenario, because it happens a lot.
I rolled 6-2 and White rolled 4-1, so we came to this position next. 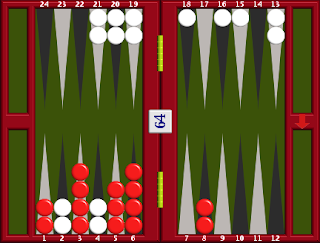 I have got slightly weaker because I have lost a couple of pips of timing and White has improved a bit because her distribution is better and she has slotted an important point. Now Snowie thinks that this is still a very strong double and White has a tough take. Gnu agrees. Again I didn't double. At least here I was consistent, as I did recognise that I had got a bit weaker, but again the blunder happens because I am reluctant to escalate the cube, a weak-kneed attitude. Backgammon is a game of aggression, be aggressive.
Next I rolled 5-1 and burned my last two spares from the 6pt, followed by White rolling 6-1 and playing 12/11, 9/3. This is a mistake for White. Slotting the next point in the prime is usually right, but here it's one slot too many. White already has the vital bar slotted and it is more important than the 3pt here. In addition, five blots is a lot of weight for any position to carry! The best play looks like the quieter 12/6, 10/9. This is much more balanced and the 9pt is a point in the prime field, six pips away from the 3pt escape hatch. The real weakness of the 3pt slot shows its head on my next roll, 6-2. 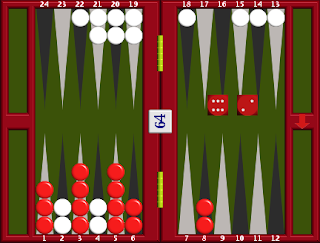 With all those blots strung out I should play 8-6 and take my chances now, as White will never be so weak again. Sadly this world class play passed me by and I played the feeble 5-3. If White had made the best play last turn then that would have been correct and 8-6 would have been a huge blunder. Clearly the five blots should have been marked with a "More Is Possible" flag (see earlier post!) and the prospect of 7 blots after, say, 5-1 (23/17*) for White should have any predator licking his lips. Here I was more sheep than wolf, but it's a wake up call. If you play me next week I might have sharper teeth! Until the next time, enjoy the game!

One thing I struggle with is the following semi-paradox:

Suppose I'm looking at a cube decision (something like your first position) and am not sure whether to double or not. If I double now and it's wrong, then my total cube error will be whatever the error is for this missed cube opportunity. But if I hold the cube and that's wrong then I'm likely to make the same mistake next roll (and perhaps the next roll or two after that). By holding, my cube error can multiply because I'll have the opportunity to make the same error repeatedly.

I generally try to play to minimize my error rate (in a sense, I'm playing against the computer's rating as much as the actual opponent) and doubling when in doubt would tend to increase my rating since I can only make a bad cube decision once and can be dinged multiple times for a bad hold, but is the bump artificial? Is making the same cube error three times in a row really "worse" in practical terms than making it once?

Yes, this is a key point in understanding practical cube actions. As you say, if doubling is correct, not doubling opens the possibility that you will repeat the error on subsequent turns, as in fact happened to me in this game.
Clausewitz's rules of war mostly apply to backgammon. Faced with two alternate courses of action, choose the one that allows your enemy the opportunity to make a mistake. Doubling now opens this possibility for your opponent and closes the possibility thatyou will make a future doubling error. Clausewitz also says that we must always do what the enemy does not want us to do. Does White want us to double here? I wouldn't if it was me.
These two guidelines help us to get into the right frame of mind to deal with this situation, rather than be gripped by the cube escalation anxiety that held me back at the time. I should have gone beyond that place and just applied Woolsey's rule. To recap, this rule states, "Consider the position from your opponent's point of view. If there is any doubt about the take, it must be a double". Is White's take absolutely clear here? No it isn't, so doubling must be correct.
Should I consider playing on for the gammon? No, because if that was correct, White's pass would be clear. Easy isn't it?