Well, the Dorbel Daily has been inactive for too long. Sometimes your brain needs a rest from analysing and studying. This is a GOOD TIP actually. Don't read about backgammon or do any studying in the run-up to a tournament. It is a well known phenomenon that learning new things has an initial bad effect on your game. This is because you will start applying them in inappropriate places. Only when you have fully grasped a new concept will it be of benefit. Think of it as remodelling a golf swing. It will pay off in the long run, but you don't want to start on it a fortnight before the Open.
So, I am going to try and post daily for a bit and these posts will be a bit of a grab bag, of blunders made by me in online play. I won't be posting those that are just oversights, partly to spare my blushes and partly because they aren't very interesting. The "Oh God, I didn't even see that I could have made a 6 prime" sort of thing isn't useful.
Here's a position from a Gamesgrid match with Chiemi. It's the first game of a 7 point match, I've been cubed and I have a 5-3 to play. What would you do? 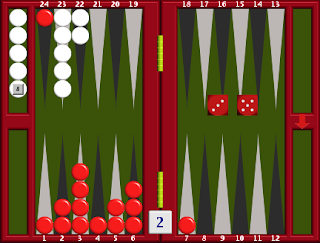 I chose to make the board, 7/4, 6/1 and wait for a shot. I reasoned that hitting a shot would certainly save the gammon and that I might even win, but his level of thinking is much too wooly. First I should have looked at the exact number of White rolls that leave a shot next turn, which is of course all 2s except 2-2. That's 10/36 after which I hit 11/36 or 110/1296 or about 8%. White will of course take 2 off with any 2, so have 10 men off in total. So, I'll be on roll with White on the bar and holding the cube in something like the position below. 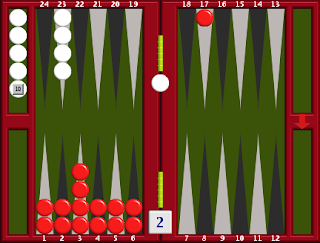 In this position I win the game just about 30% of the time holding the cube. If that seems a bit low to you, the two spares on the 3pt are the problem, for two reasons. First they give me very little choice in how I bear in the last checker and I may even have to leave a shot. The second is that I badly need to bear off as many checkers as possible before breaking my board and of course for that purpose it would be much better if they were on the high points. Move them to the 6 and 5 pts and I go up to about 36%.
So, 8% to get a shot and hit it multiplied by 30% wins after hitting comes out to about 2.4% wins if I wait. We can add a little bit for getting and hitting a shot later as well and in fact the rollout says I win 3.2% if I wait. If I had made the effort I could have come up with a figure of about 3% over the table, but I didn't which was partly laziness and partly because like everybody else I play too fast on the net. Now let's look at how many gammons I lose if I wait. None if I hit of course, but lots if I don't! When I don't get a shot and hit it, White will have somewhere between 9 and 12 checkers off and I'll be anywhere between 0% and about 70% to lose a gammon, so 35% gammons is a reasonable guess. In fact the rollout says 36%.
What if I just run the 5-3? I would have guessed 15% gammons over the board and Snowie says 14.3%, and of course I never win. So by staying I win about 3% but lose 36% gammons instead of 14%! It's not even remotely close. I should have nailed the number of my wins exactly and even if I had been way off in my estimates of gammons, I would have come up with the right answer, which is that staying is a huge blunder.
So there you go. Trying to win the game is usually good, but there comes a time to turn mother's picture to the wall and ride out! This was one of them.
Until tomorow, enjoy the game!

Not sur to have your nickname at GG