Two Blots Inboard, How Bad Is That?

Here's a nice checker play problem for you, which I got wrong. It's interesting not only because it's a tough play, but also because it illustrates a much wider principle. How would you play 6-4 here? Red trails 0-3 to 5 in the match, but in this game he has already cubed and leads 125 - 138 before the roll. White is the world class player and noted theorist Rick Janowski. 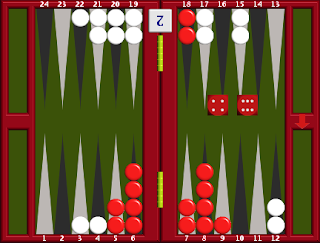 Three plays stand out, the double hit, 9/3*, 8/4*, the single hit 9/3*, 7/3* and the non-hit 9/4, 8/2. Nothing else is worth a look. My thinking went like this. "I lead in the race and my position is solid, apart from the fact that my anchor is detached from the rest of my checkers. Moreover, White is completely stripped in the outfield, so will find it hard to make a damaging play next turn. I don't need to give him 22 shots to possibly turn the game around when he owns his 6, 5 and 4pts." I chose 9/4, 8/2.
Actually, this is probably the best play to win the game, but it doesn't win as many gammons as the hit plays and gammons are very valuable here. I can't lose one and winning one will get me to Crawford. Of the hit plays, the double hit is clearly best in the rollouts, illustrating a valuable guide to good play. Two on the bar is better by far. It's better here because of the match score (dead cube, one way gammon threat), even though it leaves two blots and White has a strong board. My play was a large blunder costing about 0.17ppg
Another very interesting aspect of this is that if the cube were centred, the non hit is clearly correct! Why is this? It's because after the quiet play, I can usually offer an optimal cube next turn, so the hit plays with their attendant risks aren't efficient. When they work and White can't hit from the bar, I lose my market by the length of the street. When they don't work and White hits, I haven't got a cube at all.
For money, the quiet play is much more competitive, although still an error and the single hit is on a par with the double hit. This of course is because gammon losses come into play.

The next position also illustrates the strength of putting two men on the roof. 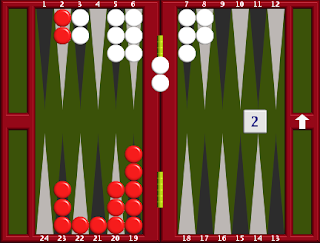 It's a position from earlier in the match. White leads 2-0 to 5 and forced plays have led to this position. White doubles from the bar. I expect that everybody will drop this like a hot brick and I certainly did. However, Snowie 3-ply will take this! Rollouts suggest that it is actually a pass, but not by much, demonstrating how strong it is to put two men up, even when you are trapped behind a prime and have two blots inboard. Here too of course the score is a factor, as White's gammons are less valuable than usual because of overage and cube ownership is also worth a lot. The pass is clearer at "normal" scores, although still not huge.
I recommend that you play this out for a few games if you find this hard to believe, you can learn a lot. Your first problem might well be how to play your next two! Any ideas? I'll give you the answer in the next post. Until then, enjoy the game!

The gammon go /gammon save concept is useful. If you ask yourselve this question at this scores, can i go for the gammon, or have i to save the gammon, it is more likely not to miss opportunities.

21 in a shot. You can close out, but you have to bring your men home in order to win. First things first.