The Cube's The Thing.

It's so important to get your cube action right. Most games are won by luck anyway, regardless of the checker play skills, so getting the cube to the right level (high in winning games, low in losing ones) is fundamental to success in match and money play.
Expert players carry a library of reference positions in their heads, positions where they know the equity and can compare it to what they face over the board. Here are two quite differing positions, the first commonplace, the second less so, but still essential for success. 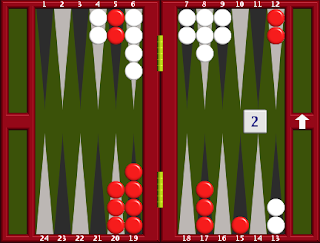 White leads in the race by 25 pips, she has escaped both her back checkers and if she clears her midpoint next turn she will lose her market, so the double is absolutely clear. Should Red take? If it was just a race Red would have a clear pass, but with his anchor he stands a good chance of getting a shot during the bear-in. Is this enough to give him a take?
I tend to take a few too many of these and I should have passed this one. White has 11 rolls that clear the midpoint immediately and also has a spare 6 and two spare 5s with which she can fiddle around while waiting for a clearing number. My side of the board is important as well. I already have the 5pt (essential!) and I may be able to build a nice board ready for a shot, but may be isn't will. I have to know that a shot will win for me.

Good reference positions are those where the take/pass decision is very close, so that when you come to compare it with what you have on the board, you can say, "Any improvement and I can take, any weakening and I should pass". The above position isn't a good reference, as it is a very clear pass and the take loses 1.2 points on average. The position below is much more useful. The race deficit is still 25 pips in a shorter race (White 100-Red 125) and the take/pass decision is very close indeed. 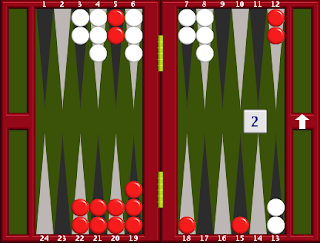 Although White's race is a bit better, because the race is shorter, her position has weakened in several respects. Now she only has 7 numbers that clear the 13pt immediately and with only one spare 6 and one spare 5 she has less time to wait for a clearing number. Red has improved too, with a solid board already in place and the bar pt slotted. I think this one too is probably a pass, but it's very close, certainly close enough to be a reference.

This next position comes from the same match and I am on the bar trailing 2-3 to 7. 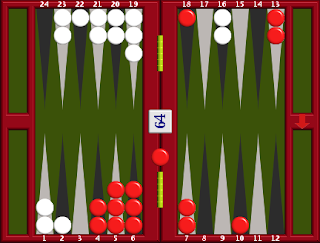 You have to look at these with a view to doubling, even when on the bar against a four (and potentially five) point board. Although White only has 13 shots all the ones play well too. Even dancing isn't fatal yet. White doesn't always cover straight away and has to dig her back men out pretty quickly even when she can make a 5pt board. Giving the cube away in these two way gammonish positions doesn't hurt too much as White can't redouble without putting the the match on the line. This is very much a trailer's double. You shouldn't try this one when level or leading, but any sort of deficit makes for a strong double here. In the match I didn't double ( a large error) and eventually lost an undoubled gammon!
As a reference position it's fairly useful as a minimum double position. Red could actually be a bit weaker than this and still have a correct cube, while at some scores White should even pass. If Red owned the cube it would be a huge redouble of course and a pass.

Well, I hope you find these useful. I'm sure that you'll see something like these every week and in the case of the 20pt anchor positions, every day! Until the next time, enjoy the game.