It's a good time to remind ourselves of Uncle Jake's minimal guide to good cube action for the trailing player in short matches. Memorise this. It will save you a lot of thinking time.
"Develop some sort of gammon threat and ship it in".
That's it, short and sweet and as near to infallible as you can get in bg. Here's a position that demonstrates it nicely and where I fell asleep and left the cube in the middle. 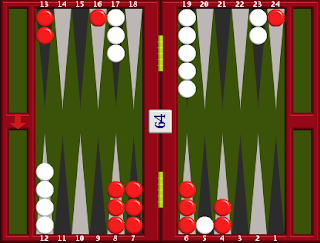 Red trails 1-2 in a match to five and trails in the race 137 -130.
This is a very clear double and a fairly easy take. What Uncle Jake means by "some sort" of gammon threat is anything that is better than you start with. About 26% of games played to a finish end in a gammon, so you start the game with a 13% chance of a gammon. Red wins about 63% of the games from here, of which 19 will be gammons, so that will do nicely. Of course it is very hard to tag those sort of numbers onto a position, although some people can do it, but like most people I just rely on my sense of smell and this has a definite whiff of gammon about it! Not only that, it is very volatile and this is a vital ingredient. 10 numbers (4-4, 3-3, 2-2, 1-1, 3-2, 3-1, 2-1) put White on the bar and complete the five prime. Red will also hit loose with all his other ones, twos and threes so it is beyond me to say why I didn't double in the match!
For money a double is an error and if Red was leading in the match it would be a big blunder, but for the trailer it's clearly right. The cube has little value for White and her own gammons are partially wasted by overage.

Well, I hit loose and White hit back from the bar, but the dice god gave me a 3-3, almost the best roll possible. How would you play this? 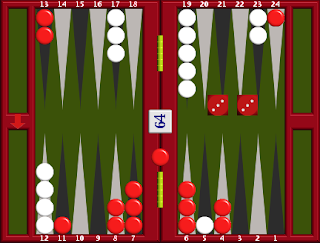 The first three are pretty easy, bar/22, 8/5*(2) and I chose 11/8 for the last one, getting another builder into the zone and slotting the back of the prime. This is a blunder. The checker on the 8pt is vulnerable to 6-2 and 5-3 from the bar and I just don't need that risk, partly because if not hit I have a great cube next turn and partly because my game plan has to be blitzing against the lone man back rather than priming. The clear best play with the last 3 is 7/4, still with three attacking checkers, as Red will break the bar to hit, plus double coverage of the outfield for White's 6-2 and 5-3 from the bar. She should step out with either of these, so note that these rolls have been converted from excellent to very bad if you play 7/4 instead of 11/8. This swing accounts for almost all of the difference between the two plays.
That was a tough play to find I think, so apart from noting that doublets often require a little more thinking time than singletons, let's move on to my third blunder of this game.

By this time I've managed to double White in and have a 3-2 to play in this very strong position. Any ideas? 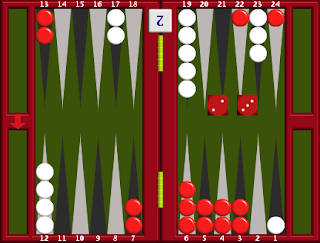 The first thing to say is that 6/1* is very horrid. Red will hit White loose if she gets up to the 23 pt but no point in hitting on the ace until you have some cover numbers and can go for a close out. I sort of fiddled around at the back without any clear idea in mind and played 24/21, 22/20.
You wouldn't think that you could make a big mistake here, but this play is a blunder.
Two things to think about here. White has what is called a brittle structure, with stacks on the mid and 6pts and three checkers buried on her deuce point. She isn't going to develop this into a prime but if she can point on a Red blot or two she has a chance to get back into the game. Red has to counter that by anchoring 24/22. You will see this time and again. Counter brittle structure with a rock against which it will break. So, that leaves a 3 to play and the best 3 is 13/10, not 6/3. Why leave a shot? To gain a double shot if White throws her magic 6-1, to increase the chances of making the 8pt and to give more hitting numbers if White moves up to the 23pt. As this play also duplicates the 1 that White needs to get to the edge of the prime you it's a bit of a no-brainer, but only if you have engaged your brain in the first place. Before making my nothing play I should have asked myself the pro question, "How do I plan to win from here?" It's a good idea to mutter this under your breath from time to time.
Well, that's about it for today. Thanks for reading, let me know your thoughts on these, or indeed any positions and until the next time, enjoy the game!