A common feature of mistakes at all levels of the game comes when we fail to evaluate positions from the viewpoint of the opponent. At the lower levels, novice, beginner and intermediate, this often shows itself when the student doesn't double positions that he would pass from the other side! Another common manifestation of this is reluctance to hit loose when the thing that all of us dread is being put on the bar! Here's a fine example shown to me by Rick Janowski. What would you do with a 6-1 here? It's 0-0 to 7 points and Red trails in the race 119 to 99 before the roll. The home boards are on the right today.
XG 3-ply likes to run, as did one famous Giant Top 10 player. You might also consider the quiet 9/3, 9/8 and there are various ways to hit loose of which 9/2* seems to be the best. The current world champion voted for hitting but admitted that over the board he would probably have played 22/15. Hard problem? Now think of it from White's point of view. Would you like to be hit or would you like to be left alone to play all your roll in peace? It seems to me that you don't want to be hit for sure, which would lead to 9/2* and that is massively correct.
The running play is a huge blunder, losing about 0.25ppg against hitting and even the quiet play is a blunder costing about 0.12. Phew! If your usual tactic in prime/prime battles is to leave your opponent to break his prime then hitting seems to be anti-thematic, but it's right more often than most people imagine.
Some points to note here. Rick pointed out to me that leaving the anchor gives White the game plan that best suits her position. She can't improve her prime but she can blitz and her made 1 and 2pts will suddenly become assets.
White is at the edge of Red's prime, escaping with most fives on her next turn or later on. Hitting her away from the edge of the prime is axiomatic.
Red trails in the race which points to hitting and hitting also clearly wins more gammons. The cube is also a factor. If White can get out her race lead is usually enough for a strong double, whereas after the hit, only 5-2 from the bar (and a Red lemon) is good enough to turn the cube.

At the end of a match with a student, I had another position where I could hit or play quietly. Here it is. 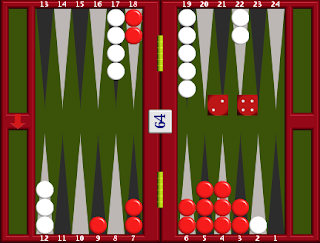 It's Double Match Point and I lead 104-130 in the race. I thought about the nice quiet play 9/3, but in the end decided on 9/5, 4/2*, even though gammons are worthless. After White hit back and I danced twice and White escaped and the match went quietly down the tubes of course I regretted the hit, but it is correct. Putting White on the roof prepares to make the 2pt, stops her making another point inboard on her next roll (except for 2-2 and 1-1, both great numbers anyway) and most importantly creates the time and space to break the anchor and run them round. If you leave White alone this turn you will only face the same problem later, by which time she may have made another point or two inboard and be much more of a threat. Hard to see? Put yourself in White's shoes, do you want to be hit? The answer has to be no, so always do what the enemy least wants and whack it!
Until the next time, enjoy the game!