What Did You Do In The War Daddy?


Let's have some fun today and look at three checker plays that I got wrong over the board. I'll put the three positions up and we'll treat them like a quiz, so take a minute or two for each if you need it and write your answers down. I find that it is a big help to set the position out on a real board. In each position Red is on roll and the home boards are on the left. 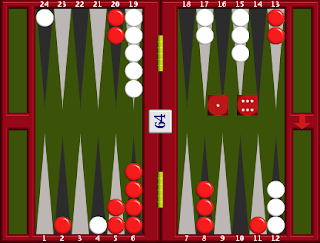 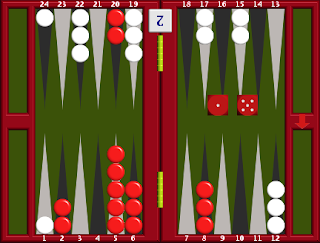 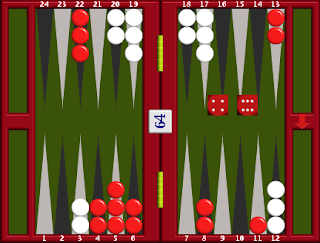 OK, Let's take a look at them. Position 1 first.

Over the board I played 11/5, 6/5. I vacillate between avoiding risks that should be taken and taking risks that should be avoided and for some reason I went for the "safety first" play here. That's too small and a blunder and the best play is actually 8/2, 6/5. This makes a third point and diversifies Red's spares, preparing to attack next turn if possible. The blot left behind on the 11pt isn't much use there, but if it gets hit there's going to be a lot of return shots and Red will have the stronger board.
TIP: If you have to bury a checker on the 1pt or 2pt, it's usually best to make it as soon as you can. It turns an embarassing and useless blot into a small asset. I should have done that and looked around for the 1. 11/10 isn't very bad, but it's an error compared to 6/5. I hope you didn't vote for 20/13. Leaving the golden anchor in an even race just can't be right.

Now on to position 2.

Red has a big solid lead here, 22 pips after the roll, so I decided to play 8/2 and hope to point on the White blot later. I find these problems so hard, it's a choice of "Pay now or pay later" isn't it. Like position 1 I vacillate between the two, perhaps it's a confidence thing. When my results are going well I play very freely, but tend to tighten up when things haven't gone so smoothly. The best play is actually 6/1*, 2/1. The idea of this is to bring the White checker "under the gun" so that with the security of my golden anchor I can hit it freely and go for a close out. This is the best plan because that horrid stack on the 5pt is useless for point making but will work quite well for hitting and covering the 2pt later. Of course this plan gives White an immediate shot from the bar that will equalise the race, but Red has a high anchor and will get return shots of his own, lots of them. The hit play wins 58% to the quiet plays 57%, but the big bonus is the extra gammons, 20 rather than 15 and a doubled gammon will take Red neatly up to 5.
Is there a useful guideline that might indicate to us when to move to a blitz? Yes there is.
TIP. The best way to take advantage of a better home board is to get into a blot hitting contest.
Put White on the roof here and he has 9 dancing numbers, compared to Red's 4. That's enough to go for the blitz option, particularly with that 20pt anchor as insurance and particularly here where Red can't really hope to build a prime.

I decided to make the five prime, 13/7, 11/7. A five prime is a big asset of course, but Red pays too high a price for it here. It leaves a shot, it abandons the valuable midpoint and it leaves three checkers, 20% of Red's army still trapped. What else can we do? 11/1 is safe, but creates nothing and reduces Red to 14 playable checkers. 22/16, 5/1 is a bit better, but still buries a checker. Best of all is 22/16, 11/7! This escapes one man fom the anchor and slots the bar neatly duplicating fours. How important is it to escape a man?
TIP. The most useless spare is the one on your anchor.
You can't afford to have three checkers on your anchor; that spare has to get into the game, the sooner the better and this is quite typical. Strong players routinely jump this man into the outfield in much more dangerous situations than this.
Basically this is a prime versus prime contest and having as many checkers to play with as possible is paramount. That checker has to come out, not to race but to take part in the battle. Think of it as a battlefield reserve battalion; throw it into the battle now and it might tip the balance. Troops in reserve don't win any fights.
Well I learned a few things looking closely at these mistakes, I hope you did too. Until the next time, enjoy the game!

i feel pretty good about this, the first one i got right, the other two i got wrong, but choose the same as you, so it must not have been THAT wrong ;)