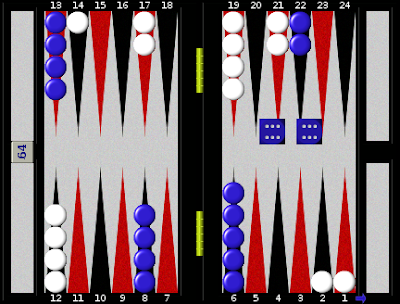 You'll have been reading recently (fibsboard) about how we need to allocate more thinking time when we roll a doublet and the move isn't clear. What do we need to think about? I like to gather information and the first piece is the pipcount, cunningly not displayed in yesterday's post, so that you had to count it for yourself, just as you would in live play. After this roll, Blue leads 134 to 158. Given an average White roll Blue will come on roll next turn with a 16 pip lead. With that sort of lead there's no reason for Blue to stay back and 22/10(2) is clearly correct. If you're ahead in the race, move forward, if you're behind in the race, stay back. Not rocket science is it?

This is one of those doublets that allows us to move from one type of game to another. Before the roll both sides had two men back and were struggling for position. This giant roll allows Blue to switch two men from a weak anchor to a strong outfield point, so that suddenly he is bearing in, either against an anchor or against one or two blots. Clem is worried that with all his men on four points Blue is a bit stacked, but closer inspection reveals that the situation is a lot more flexible than it looks. All the doublets play well next turn and 16 other rolls make the bar, 5 or 4pts. All the other rolls can be played leaving an outfield blot at the worst, except 6-5 and Blue will even get away with that if White moves up next turn. Another doublet, several choices, what would you do? We'll find out tomorrow. Until then, enjoy the game!
Posted by dorbel at 00:54

thanks for the tip about racing: i read it before but didn't place that much importance on it (i effectively forgot about it). does a hierarchy of 'rules of thumb' exist? i.e. a ranking list giving more importance to one tip rather than another? or is it a truly impossible task due to to large positional permutations in a game which would cause this proposed hierarchy to be a volatile thing?

also, if you are using gnu would it be possible to also make a link to the *.sgf files for your positions and matches, or copy/paste the gnubg_id allowing the positions to be set up almost instantly?

Thank you Wayne. Sadly for those who would like backgammon to be easy, tips and rules of thumb are only ever guides. As you say, the almost infinite permutations, where the position of one checker can make an enormous difference, make for numerous exceptions and instances where one "rule" clashes with another.
To play good backgammon, you have to learn to think for yourself and to keep thinking even when your brain is crying out for a rest. Still, racing when you lead and not when you trail is as good a guide as any!

Sorry, I forgot about the Gnu thing. I have actually never used the ID feature, but I will gladly add these in the future if they are interesting to you.

thanks dorbel - regarding the gnubg_id i think you just have to copy the text string in the bottom right of the gui. i should then be able to paste it into my program for simple setup.

regarding the volatility of tips, i do understand.

incidentally, a long time ago i studied a bit if AI. so this afternoon i started thinking about some sort of integrated 'expert system'. it would retroactively analyse say the best 3 or 5 moves (a smaller search space) and provide a numbered list from a small database of tips (aka rules) for each one saying why they were better moves (which tips they conformed with). afaik gnu, snowy, extremegammon, jellyfish and the rest do not have this. it would be a real boon for people learning the game like me who would like to understand why one move is evaluated as better than the other..

Obviously, entering on the 22 is forced, and then that checker is stuck. OTB, I'd hit and make the 5 point without really thinking it over very much. Is there something else?

Well, yes. 13/10(3) - this moves 14 checkers into the zone against a man on the roof and another blot. If white doesn't anchor then blue has an avalanche of men poised to rain down on the blots. But is this sound? One downside is that abandoning the midpoint makes it harder to bring the straggler home. The other is white's superior board - to effectively blitz, one needs to be willing to hit loose in one's homeboard and the strong board puts me off of the blitz idea.

...we need to allocate more thinking time when we roll a doublet and the move isn't clear.

Well, at my level of play I need to allocate more thinking time even when the move is clear - or at least when it seems clear. I can't telly you how many times I've made the "obvious" doublets play only to see later that there was a much better move had I stopped to think about it.

Thank you for writinng this