These are the answers to the last post, so please go back to "Keeping An Eye On The Masters" if you haven't seen it already. 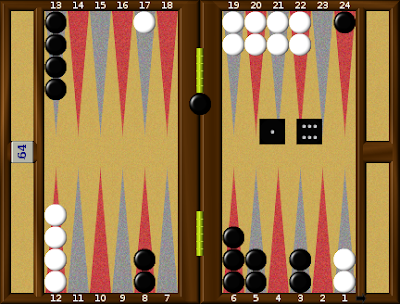 Black to play 6-1. Mochy played bar/24, 13/7 to keep his anchor, leave fewer shots and bid for a prime of his own.
The cost of this is of course that being hit costs 18 pips and allows White to leave his anchor with a tempo, but by a small margin it is the best play. Bar/18 is a small error. 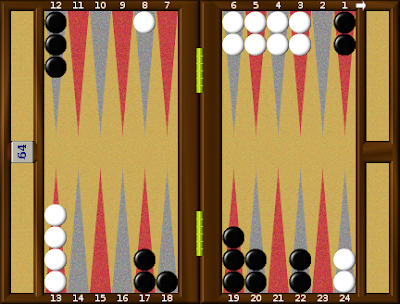 Should White double this? By a hairsbreadth, this is not quite a double technically, but as a double would in theory cost you 11 thousandths of a point (after a 1296 game rollout), it is in my view worth a punt! It's pretty volatile. If White is a much weaker player than Mochy (as 99.99% of players are) then I think that she should double this and hope to get lucky. Here, White is Paul Weaver, a world class player in his own right, so he reasons that handing a very takeable cube to a man who is arguably the best player in the world is not a good plan! 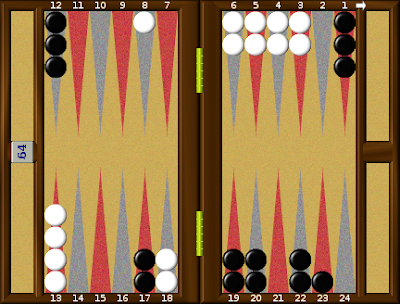 Now White is on roll. The correct cube action for Black is not hard to find. It's an enormous pass. Is White too good to double? By a small margin he is and doubling is an error costing 0.054 of a point. However, a double is, in my view, a good practical play. Although White has an equity of 1.054 points if he plays on, that is theoretical and he will have to play well to get it. When he doubles he puts a solid point onto the scoresheet without even having to roll, much less play. To me, 1/20th of a point is a reasonable price to pay for that.
All of these positions are from Game One of a 13 pointer between Mochizuki Masayuki and Paul Weaver and this match will soon be available as an annotated file.

In my next post, which will be later today if the Good Lord's willing and the creek's don't rise, I have four ultra tough checker plays for you, all from the sharp end of the game when there are huge amounts of equity riding on every roll. You'll love 'em so stay tuned.
Until then, enjoy the game!
Posted by dorbel at 02:09

Did Paul cash in the third position?

Playing on in this position is not, to borrow a phrase from Walter Trice, an irrevocable vow to keep playing until you win a gammon. At worst, you're risking the possibility of not having a cash next turn. So as far as your own playing ability goes, you should just be worrying about whether you can play the very next roll correctly, not whether you can play the whole rest of the game correctly.