If you haven't seen the previous post, entitled The Sharp End, go there first for the problems.

Let's take a look at them. 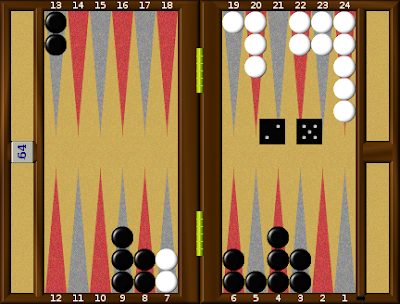 Black (me) trails 3-away, 2-away. Sometimes position are much simpler than they appear. Black trails in the race 72-104 before the roll and although White's count is not as good as it looks, with the gap on the 4pt and the stack on the 1pt, that's still a substantial lead. When I first started playing tournaments, which was within a few weeks of playing my first ever game, I felt very intimidated. My opponents would sometimes study a position for an age before making their play. Often on my turn I had no idea what the best play was and no idea how to figure it out either, so I used to do the one thing that I could do in order to look as if I was actually a deep thinker like them. I counted the pips. After a while, I began to realise that the pipcount often indicated the right play! It does here too. Black trails in the race and must stay back as far as possible and block as many rolls as possible. 9/2 is the play, although in the match I actually cleared the 8pt. I was worried about having two blots in board if I got a shot and hit it, but that is jumping at shadows. If I don't get a shot, or I do and miss it, I have two points slotted. If I do hit a shot only 6-4 is enough of a lemon to fail to cover one of them. Stay back, block points, build a board as fast as you can, all point to the best play, 9/2. 2/3 for the panel. 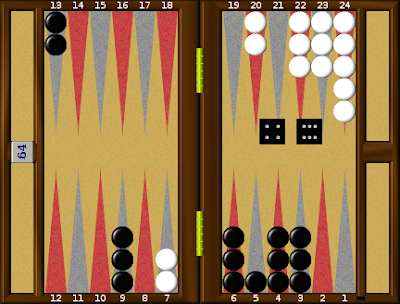 Position 1 wasn't even tough when looked at closely. This one is. It is of course the next play in the game, but now things have changed radically. One feature of the last position was that White would only be forced to leave a shot with some sixes, but now all the fives (except 5-5) leave a shot too, so plays like 9/3, 5/1 or the panel's choice of 9/3, 6/2 are less palatable. You have to volunteer a shot with 9/5, 9/3.
When White hits and you dance, you are of course sad, but you aren't dead yet and besides, that sequence only occurs 12/36 x 16/36 or about 14%. The rest of the time you are very glad indeed to have the 5pt. 86 glads and 14 sads is a good ratio. 0/3 for the panel. 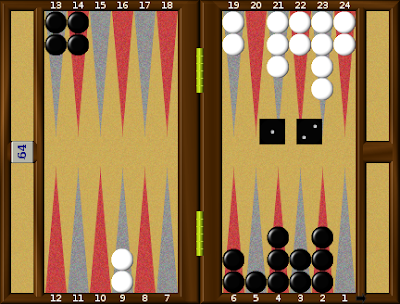 Different match, this position is double match point, that is, any position where the cube is dead and if either side wins the game, they win the match.
In Position One, we saw that aggressive slotting worked well when the opponent was still unlikely to leave a shot immediately and in position two, we saw that 5pt ownership was essential. Both of those guidelines work well here too. I'm not sure what the best play is, but it's one of these. 6/5, 4/2 or 4/1 or 3/1, 2/1! Whichever of these you choose, you can see that either the 5 or 6pts is slotted, essential for Black if there is going to be hitting. The Panel scored 2/3 here. 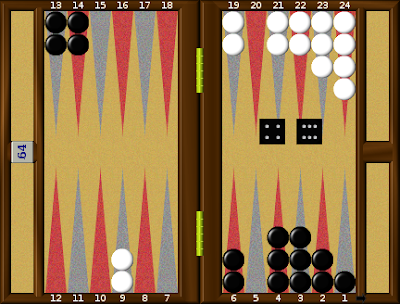 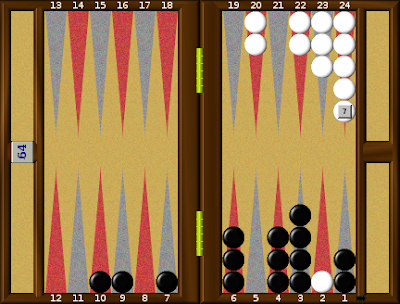 Not too hard. Black trails 3-away, 2-away, although that is not very important. It's all about volatility with 15 numbers to make the 2pt on White's head and another 17 to hit loose. I doubled this and rolled 6-3 after White correctly took.
Here's a handy tip to quickly calculate the number of rolls that make the 2pt. It's the square of the direct hitters, minus any non working doubles. Here that's 4 squared = 16, minus 5-5 which doesn't work. Saves a lot of work. All our intrepid panel doubled this and only one wasn't sure of the clear take. Thanks to them for their efforts, thanks to you for reading. Until the next time, enjoy the game!

I came late to the party. Is 8/6 8/3 really a double whopper in position 1? That's quite startling to me.

Even after being told that Position 5 is not hard and that the take is clear, I still don't see how to calculate it. Maybe I should have credited White with 2 wins (out of 36) for the four misses, 2 wins for the 15 pointing rolls, and 6 wins for Black's remaining rolls?

Yes, 8/6, 8/3 does indeed cost more than 0.2ppg, startling to me too! The 9-2 play prevents White from playing 1-1 and 6-1, as well as getting a triple shot after 6-3, 6-4 and 6-5. The double slot is also more positive than the "safer" 8-6, 8-3, making a board much faster than the alternate.
In position 5 White is hardly dead even when Black throws one of his 15 hit and point numbers. When he has to hit loose, White will have a direct shot and escaping numbers trough the open 5pt. XG gives White 32% wins here.

O.K., after playing around with the computer a bit more, I see that one way I could imagine estimating White's winning chances OTB would be as follows. Half of Blue's rolls I'd call "strong" (the doublets plus the 12 non-doublet pointing rolls); the other half I'd call "mediocre." After a strong roll, White's winning chances are roughly 25%, and after a mediocre roll (which Blue will indeed use to hit loose if he can), White's winning chances are roughly 40%. Averaging 25% and 40% gives about 32%. This is an approximation because not all the strong rolls are equally strong (e.g., 66 is much better than 33), nor are all the mediocre rolls equally mediocre, but it's not too far from the truth, and I can imagine learning how to make this kind of estimate OTB.