Here we are again, money game, Black on roll holds the cube, White with 14 checkers off is still dancing. Can Black redouble? 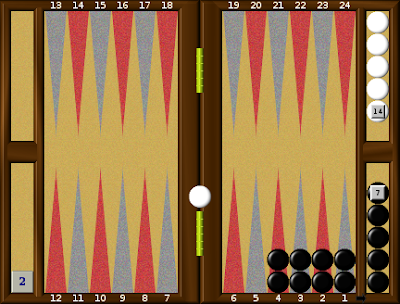 Not unless he wants to be beavered! White is a small favourite here and will love to get her hands on the cube in this immensely volatile position. Basically Black isn't yet in a four roll position, as 24 of his rolls only bear one man off. He still has some danger of leaving a shot too. The same number of checkers on three points is no redouble and a take and even if you move them all down to the lowest two (or one) points, White can easily take a correct redouble.

When Black gets down to six checkers though things are very different. 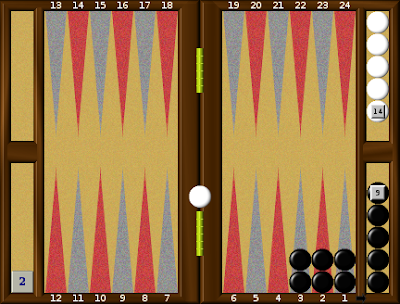 Now 18 rolls bear off two or more checkers and White's chances of dancing and getting a shot are of course dramatically reduced. Now Black should redouble and White should pass, usually with a small sigh. It's awful to lose with 14 men off. We've gone from no double/beaver to redouble/pass in a roll, an indicator of the huge volatility when one side (or both) is down to a single checker. White can take if she has entered and reached her 18pt. That position looks like this. 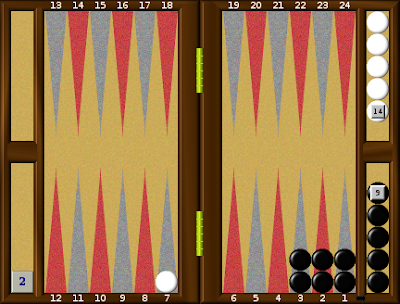 While White was on the bar, the position was complicated by the chances of her dancing again and/or getting a shot but now that it is just a race we can use EPC to figure this out. Her task in running round is of course simple, but she will sometimes enter her home board with a roll that doesn't bear off usually meaning last roll wastage. For that reason, we have to add some pips to her pipcount and the agreed figure for a single checker is 3.5, so her EPC is 21.5. Black is a little worse than a true three roll position, as not all his doubles save a roll and he may yet roll three consecutive ones. Quite arbitrarily I add 0.5 of a pip to that to make his EPC 22.5, so redouble/take.
If you don't know what EPC is then you need to read this article.
Walter Trice invented this and it is very valuable. He expands upon this further in his articles in GammonVillage Magazine .

It is premium content, so you will need a subscription, very good value at $50 a year, huge archive of articles and matches, with new content added regularly. You could also buy Walter's wonnderful book, "Backgammon Boot Camp", arguably the most bangs for your buck on the market.

Until the next time, enjoy the game!
Posted by dorbel at 03:27

Note that the second position is not just a pass, it's a pretty huge pass. gnu 2-ply rollout pegs taking as a double whopper - an even bigger error than failing to cube.

I came a bit late, but these cube decisions are covered pretty well in Robertie's 501 Positions, where he points out that the "within 5" rule has to be modified when we get down to such a low number of checkers, because White has fewer opportunities to catch up.

One thing Robertie doesn't discuss (and which is very much underdiscussed in general, in my opinion) is the beavering strategy. I knew that the first position was ND/T but I didn't know that it was a beaver. So in a chouette I would have erred by failing to beaver.