In the last post we looked at a couple of difficult plays, where the player had an option to make his 5pt or hit. Here's the first. 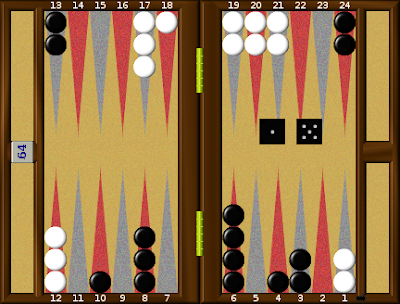 Black leads 2-0 to 5. He chose to play 24/18*, but Timothy Chow in his comment pointed out all the downside to that play. Too many return shots, a staggering 30 (!), after which White may well make her bar anyway. Four blots is also more than most positions can stand when you are outboarded also. What we have to grasp here is that this is highly likely to develop into a prime/prime struggle and for that, you need a prime. 10/4 makes a very useful point and leaves no blots, but it also makes it very hard for Black to make his bar and his 5pt in the time that he has left. The best play, by a lot, is 10/5, 6/5 and leave the 4pt slotted. Anything else is a blunder. After that play, White is a favourite to make her bar or hit, but is unlikely to do both. If she hits, Black will get return shots. If she makes the prime, Black will be a favourite to make a four point board.
Making the 5pt is a world class play. Not sure I would have spotted it. I think that I would have made the 4pt, wrongly. 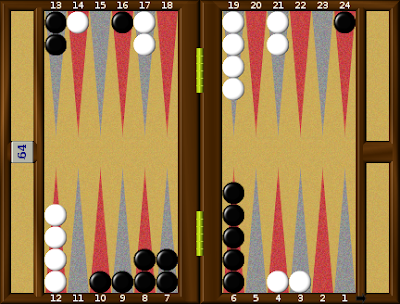 In this position, trailing 4-away, 3-away, Black decided to double. A doubled gammon takes him nicely to the winning post, while cube ownership and gammons are much less useful than usual for White. It's a pretty easy take and technically it's a bit short of being a double too, but I still like it. Black won't have to make any more doubling decisions and if he gets lucky he can win this match in a few rolls. A useful guide incidentally, although not infallible, is "Never double until you've made a point inboard". This is still known in London as the Dimitri Rule, after Dimitri Kourdoulas the likeable Cypriot regular at the old Double Five Club.
After doubling, Black had to play 4-1 and opted for the double hit, 8/4*/3*. This of course leaves Black with six (!) blots and no hiding place if White gets among them. XG2 will play this at all levels up to ++, but a 2592 game rollout was unable to separate the two plays. They are essentially equal. I like making the 5pt. Rather as in the first position, it gives you a position with which you can fight the upcoming battle. It also unstacks the 6pt and leaves Black nicely placed to blitz or make a five prime, or both. It also looks to me as if it will be fairly easy to play. Still, if like Paul Weaver and XG2 you like the double hit, go for it! Acording to the rollout you will do as well as me, provided you can handle the complex game that has to follow.

Tomorrow I want to look at some positions where I was trying to defend against a backgame. In the later stages, the plays are usually fairly regular, but in the first stages immediately after the Big Bang as it were, the plays are far from obvious. How well does the bot play them? How well did I play them? We'll see, but until then, enjoy the game!
Posted by dorbel at 06:11

My rollout is only 324 games and thus not definitive. I will extend it. However, a 2592 game rollout of the checker play is likely to be a better guide than a Gnu 4-ply evaluation.

A longer rollout (1296 games) shows that this indeed a double (97% confident) and no double is a small error. I always did like the double!
Thanks for the heads up on that Bill.