In my last post I promised you some riveting "defending against a back-game" stuff. The game turned out to be even more difficult than I thought, with very long rollouts needed and a lot of thinking time, so rather than present you with something half-baked and not thought out, I'll postpone that for a bit.
Not much use trying to explain it to you if I don't know what's going on in the first place!

Instead, some reporting. Fibsleague, Franck del Rio's long running contest reached the end of session 54 with a 13 pt play-off between zyxtcba (USA) and Backwoods (Finland). Zyx had never won the title, while BW was going for his record setting sixth crown and was the favourite in most eyes. Zyxtcba was the winner in a thriller, 13-12 so let's take a look at some of the major decisions. 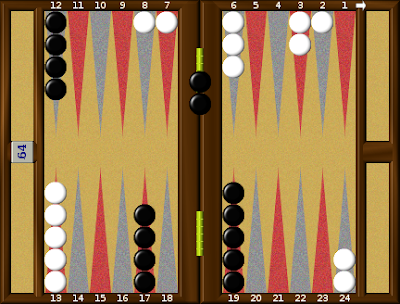 White has caught Black cold and put two checkers on the bar and correctly doubles this. Can Black take it? Zyxtcba passed and you can hardly blame him. Nobody likes to take with two men on the bar, but it's a fairly clear take and the pass is a blunder. What are the features that might lead us to the right decision? White only has a two point board as yet and still has only eight checkers in the zone. The midpoint is still stacked and the back checkers haven't moved. The point that White has made is the 3pt, useful but not a killer and the point that White has slotted is the 2pt, not ideal.
How can we add all this up and get "take" at the end? If only there was some nice formula that took all these factors into account, but that is the Holy Grail of backgammon theorists. Keep this one in mind next time you get caught out by an early blitz. Improvements for White, a better point made, a better point slotted, split back checkers, another builder in the outfield, any of these can push this one into the drop box.

One of the biggest equity sinks for all of us is the missed double. There are a number of reasons for this. First and foremost, doubling any position gives your opponent the chance to make a mistake, passing when he should take or vice versa. Also, if taken you can't then make subsequent missed double mistakes! A string of four or five missed doubles hurts a lot. A third subtle feature is that most players below expert level handle redoubles poorly, often missing a chance for a correct 4 cube. Handing the cube to an opponent of this type eliminates your chance of a doubling error and opens the opportunity for your opponent to make a big mistake or two. 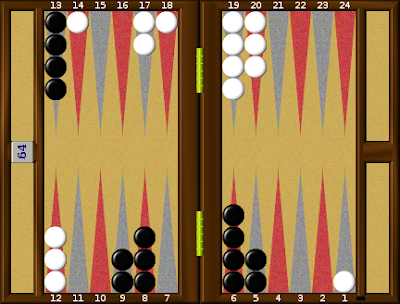 Zyxtcba (Black) misses a chance to double here. He has a small lead (128-136), he has escaped his back checkers and his front position should develop nicely, giving him winning chances racing, priming or even blitzing in some variations. White can still take. His own front position is OK, so if he can hit a shot he can turn it round quickly and he might jump out and win the race too. Nevertheless, Black should double this and let White have a problem, even though he probably knows that White, a bold taker and redoubler, will make good use of the cube if he can.
Black missed two more chances to double this one before eventually cashing to level the scores. 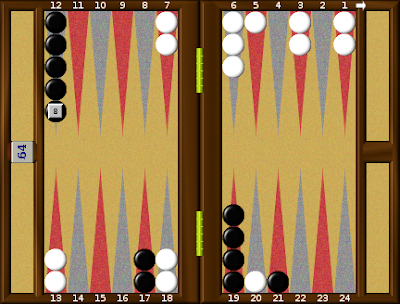 Backwoods (White) missed a very rare doubling opportunity here. Usually doubling while you are still anchored like this is a no-no, race lead (127-148) or not. Here though Black is going to have a lot of difficulty unloading that grossly obese midpoint and building a board. White's plan is to run the blot off the 20pt and then wait for a double or a 5-x to clear his anchor. After that, the race should be easy to win. I can't see that I would have doubled here either though. I am just being wise after the event.
In the match Backwoods ran the blot with a 6-2, zyxtcba eschewed the hit after rolling 2-1 and we got to this position. 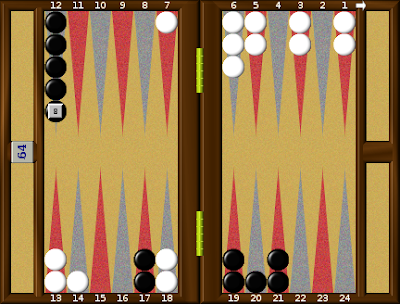 Here's why it was correct for White to double last turn. He has escaped his blot and gained in the race and this is now a pass! This is really exactly the same as when you double with the midpoint to clear against a bar anchor. White has plenty of time to roll the double that does the job and should only face one single shot when he doesn't. In the match he again chose to roll and rolled a 5-5 for mega market loss. Two very unusual positions and we'll go on and look at Game Four tomorrow. I do mean tomorrow I promise.
Until then, enjoy the game!
Posted by dorbel at 07:56