We pick up the match in Game Four, with Backwoods (White) leading 2-1.

Neither side has had a correct double up until now, but White is on roll here after Black (zyxtcba) has just run off his 20pt anchor with a 6-5. 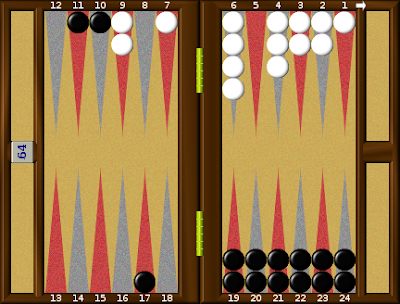 White leads 72-79 and I think most of us will recognise this as a double. Backwoods certainly did and turned the cube. Can Black take? You do need to have a methodology for race doubles, as they occur often and guesswork will lead to a lot of mistakes in commonplace positions. The simplest, which works well enough for a straightforward race like this is 8-9-12. Compare your pipcount to the opponent. If you lead by 8% you have enough for an initial double. If you lead by 9% you have a redouble and if you lead by 12%, then that is the first point at which the opponent should correctly pass. Here Black leads by 7 in a 72 pip race. 7/72 is 10% approximately, a clear double and a straightforward take. Do not worry about the fact that Black needs five cross-overs to White's three. Crossovers do matter, but not very much and they can usually be safely ignored. White's stack on the 6pt and gap on the 5pt would also be taken into account by perfectionists, but just knowing the length of the race and the size of the lead gives us the correct answer, double/take. Those of you who want to refine your racing cube play can search the Internet for Walter Trice's Rule 62, The Keith Count, The Ward Count and others!

In Position One, Black only wins about 23% of the games if they are played out to the end cubeless, but owning the cube in a race with a lot of mileage left has enough value to give Black a take and later on we got down to this delightful position with Black on roll. 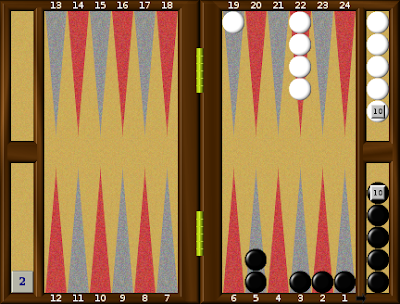 What's the correct cube action for both sides? In very short races like this, with only a few checkers left and uneven distribution, just using 8-9-12 is often misleading, but it actually gets this one right. Black leads by 2 pips with 16 to go and 2/16 is 12.5% indicating double/pass, which is the right answer! We can also look at this as a three roll position, i.e. one where both sides are likely to be off in three rolls. TIP. An equal three roll position is double/pass.
That is to say that if White's position was the mirror image of Black's, it's double and pass so clearly White must drop here where he is worse than that.
As above, you can further refine your technique in these short races with unequal distribution with one of the counting methods mentioned above. I would add to this the Thorp formula, old and easy to use, but for most of us, keeping it simple is good!

White blundered and took and so went into game Five trailing 2-5 to 13. Black built a strong position and arrived at this next position on roll. 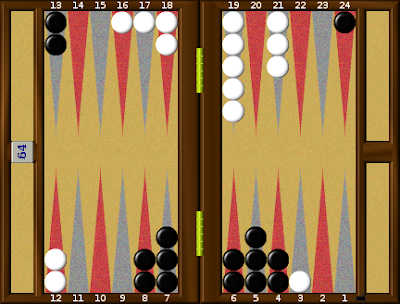 Any time that you have a five prime with an enemy checker behind it, you have to think about doubling, if only because to see a cube in this position is not what White wants! Always do what the other player does not want you to do. White emphatically doesn't want to be doubled, so it's a cube. Perhaps Black is inclined to be cautious because he is the match leader and feels that that is his best strategy. Perhaps he think that if things go well he might win a gammon, we don't know. At all events he didn't double, White breathed a sigh of relief and the next exchange (Black 6-1, 24/17*, White 5-3, bar/22, 13/8* got us to Position Four. 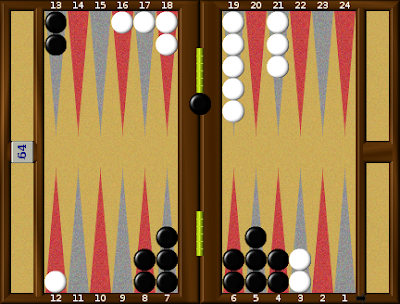 Don't you just hate to double from the bar? Join the club, but when there are blots to be hit and you have a five prime with two enemy checkers behind it, it is right and actually Position 4 is a marginal take/pass. TIP. A 22 pt anchor behind a five prime is usually a pass. Here, even though Black is on the bar a double is correct with 15 hitting numbers to get among White's three blots. Even if Black dances, White will still be struggling to tidy up and note that awkward stack on the 6pt too. A doubling opportunity missed and next turn Black had a big cash after hitting from the bar.

Zyxtcba's victory in the play-off's at the end of Fibs League season 54 was just sufficient to propel him into the top 12 in the Master's list for 2011. These players now go into a knock-out contest to decide the supreme champion for the year. All ties are best-of-three 9 point matches. The first round features the players who finished in the 5th to 12th spots. An all-German tie matches BushSucks with masselkopp, Mason_Verger (Germany) plays zyxtcba (California, USA), roadkillbooks (Argentina) plays otto (Canada) and Schigolch (Germany) plays mano (France). The winners of these ties will advance to the quarter-finals, where the seeded players, jarma (Hawaii, USA), dorbel (UK), BluNick (Italy) and PHunter (Switzerland) wait for them. 12 players from 8 countries demonstrates the wide appeal of this excellent league, smoothly run for us by Tomawaky, so if you don't play in it and want some good action, sign up today at Fibsleague .

Until tomorrow, enjoy the game!
Posted by dorbel at 01:20