It's Game Six now and zyxtcba (Black) has built a comfortable 6-2 lead. It's Backwoods (White) who is on roll here though, with one of those juicy late game positions so volatile that the cube is red hot on almost every roll. 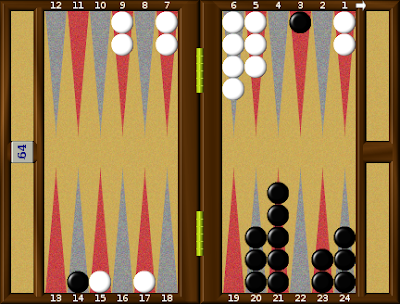 The pipcount favours Black 75-105, but that shouldn't stop White from doubling here. Hit and dance is a market loser and he has lots of rolls that hit two checkers. He can actually be too good after this next sequence. Black has the stronger board of course and that 30 pip lead, so he can take. White's play isn't always straightforward though and after the take he rolled 2-1, playing 17-14*. This is not a big error, but the double hit is clearly right. Always do what the enemy does not want you to do. If you were playing Black here, do you want White to put two men on the roof? Emphatically not. The double hit clearly wins more gammons and trailing 2-6 Black has to select that option. Anyway, he played 17/14*, Black rolled 2-6 and we got to this position. 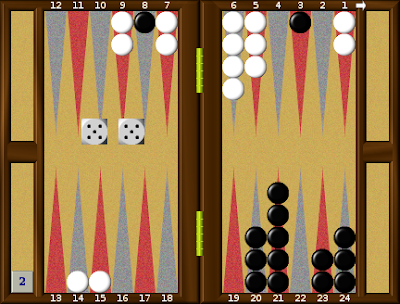 Game Seven started with Black now leading 6-4 to 13. There were no interesting cube opportunities for either side in this game, but there were two checker plays that clearly illuminate themes that recur over and over again, so it will be valuable to look at these. 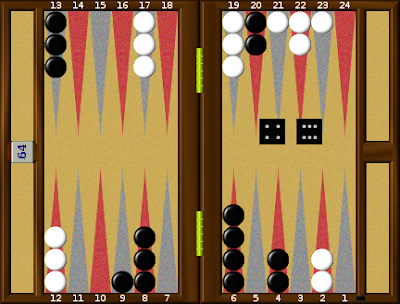 Later in the same game, it's White on roll. Black is on the bar. 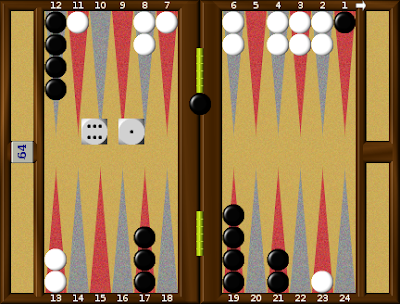 White correctly decided that he was now too good to double and rolled 6-1. What's your play?

We'll take a look at these tomorrow. Until then, enjoy the game!
Posted by dorbel at 02:37

The danger in (3) is that Black hangs on to his anchor too long, allowing White to build a decent board and leaving his stragglers too far from safety as the front men advance. With no good forward play I'm thinking about 20/10 and 20/14 13/9 while there's two blots in White's board and not many men in the zone. I think 20/14 13/9 gets my vote (on the grounds that it also makes life that bit more awkward for White's back men).

If I had more firepower back on the mid I'd think about 13/7 9/5 - hoping to build quickly or pick up more men - but here you have to give up the mid almost immediately afterwards, leaving the anchor adrift in enemy territory.

In (4) I might well play 13/7 before actually stopping to think! If Black comes on the 1 then it will be a great point to have, but then why not go all out for the gammon? 8/1*, you have plenty of weaponry aimed at both the open points and minimal Black defence to worry about.

I'm gonna answer 4 first since that one seems easiest. 8-1*. you're too good because of your gammon chances, so go for it. It's better to be hit there than to allow him to make it.
In problem 3 I think you have to leave your anchor. otherwise you're burying checkers where you don't want them or giving up the midpoint which doesn't seem right either. my first instinct was to run 20-10 and that might be best, but making the 9 point is really strong and seems like it's probably worth leaving white 2's to hit especially since 2's play well inside his board also. so suck it up and play 20-14, 13-9.

In position 3, breaking anchor looks like a blunder to me. Just because White has a couple of blots doesn't mean we can break anchor with impunity. We can easily get blitzed off the board. The only real candidates I think are 13/3 and 13/9 13/7. I'd probably play 13/3 but I'm not sure about that.

In position 4, 8/1* would be the natural play if the cube were already turned. However, paradoxically, sometimes one should play more cautiously when too good, to make sure that one can still cash next turn if necessary. If we hit 8/1* and get hit back, is it still a cash? Not sure, but probably. I'll go with 8/1* after all, I guess.

3) With two blots in white's homeboard black can afford to play more boldly. I'll play 13/7 13/9 bringing 12 checkers into the zone. If I'm hit, there's good counterplay and if I'm not I should be able to strengthen the prime next roll.

4) Since White has decided to play for gammon, make the gammonish play by putting a second checker on the roof. I think that's stronger than priming, but the lack of builders to cover the blot on the ace makes me have second thoughts. I'll hit anyway, and then play 8/7 to aim three builders at the open 5 point and one to cover. 8/1*

3) I like making the 9 to continue my prime, then the alternatives are 13/7 and 20/14. I prefer to break the midpoint, in order to gain timing if hit and avoid being blitzed or counterprimed. But it's a difficult decision. 13/9 13/7

4) 12 checkers in the zone, stronger and frontloaded board, useless 8pt make it a clear blitz for me: 8/1*