Fibs League updates. In Master A, BushSucks has finished his campaign with 8-4 and only jackdaddy (7-4) and roadkillbooks (4-4) can equal this score in the race for second place behind dorbel (9-3). Over in Master B where they are playing 13 matches in this session, MasonVerger, runnerup and blotsalot are all completed on 8-5 and looking nervously at the final matches of stukatz (7-4) and Backwoods (6-3). Sunday is the last day for play. Looking down through the Gold, Silver, Bronze and Sesame divisions, the league looks very healthy with a further 97 players spread over the four lower divisions. This is a good week to sign up if you want to try league play, with the new season starting in March.

In the last post we left you looking at this position from Backwoods v. zyxtcba. White is on roll trailing 5-9 to 13. 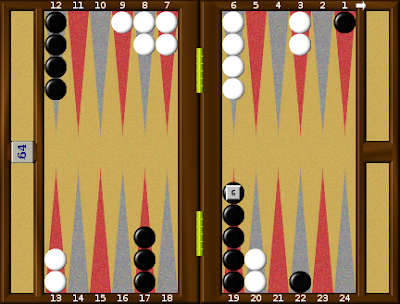 Both Timothy and Clem nailed this one in the comments section, clear double for White and at this score, Black should pass. The cube is worth next to nothing for Black and although gammon wins work well for him, taking him to exactly 13, he isn't going to win many of those with White owning the 20pt anchor. White actually wins this game about 69% of the time, including 24 gammons, while Black's gammons are down in the backround noise range at about 5%.
It didn't work like that in the game. White didn't double and Black, who has become more and more wary of turning the cube as the match progresses, eventually cashed after missing a string of correct doubles. Match leaders often freeze up like this and for positions with a lot of gammons that's a fairly good policy, but in races and holding games, the double and take points are not very much different than normal and you do need to keep the pressure on.
If you are the trailer and you see the leader missing opportunities to turn the cube, this often means that they are going to be nervous takers as well, so look for opportunities to double anything with a gammon threat. 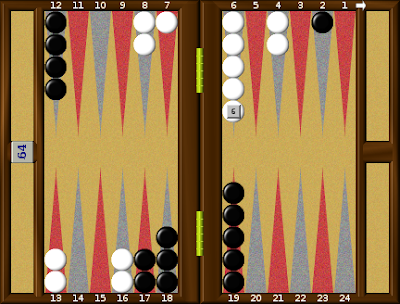 Actually White should double this even for money, but there Black would have a simple take. At 3-away, 8-away, Black has to let this one go. The cube is just about dead after a take and his own gammons will include overage, so it's a very close pass. In the match Backwoods turned the cube and Black correctly passed. Trailing 6-10 to 13, White then had this one in the next game. 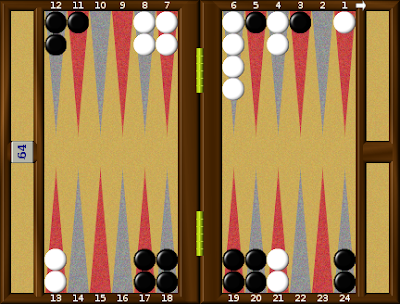 Not immediately obvious that this one is a cube, but note again White's high anchor, just like the position at the start of this post. The old-timers hated to embark on a blitz without a high anchor and they knew a thing or two. It keeps the gammon losses down and provides a nice point from which to recirculate if hits are exchanged. Note too Black's dead checkers on the ace point. He'll have to play the rest of this game with 13 checkers, always much more difficult than when you have the full set to use. White has one out of play as well, but if his blitz works he'll make it and if it doesn't, he may be able to recirculate it. Double and take, but in the match a missed opportunity. Black won an undoubled gammon to go to Crawford and eventually won the match 13-12 for his first Master's Title.

This 13 pointer lasted 18 games, unusually long and down to a lot of missed doubles. Missing doubling opportunities is one of the things that separates us lesser mortals from the demi-gods who play at the very top level. The only way that I can see to cure this tendency is to double earlier and earlier until you start to see some wrong doubles creeping in. That's what I'm trying to do in my matches and in the next post I'll try to show you some examples, of the sort of position that I am doubling (or failing to double) these days.

Is the first position a take for money? I would have thought so, but the cubeless numbers you quoted make it sound like it may be a pass for money.

The first position is a take for money. XG+ gives White 0.859 after a double. Holding the cube and winning his occasional gammons is enough to give Black his take as White only leads by 4 pips after all and may yet have difficulties containg Black's straggler. A long way to go in this one!