Learning To Love The Cube Part 2

More Fibsleague news. In Master A dorbel and BushSucks will be going into the playoffs, where they will be joined from Master B by stukatz who produced a late burst to finish 9-4. The second place there will go down to tie points between the players who finished on 8 wins and as it stands Mason_Verger leads that pack. The Gold, Silver and Bronze divisions have thrown up some rising stars who will be looking to do some damage when promoted. _loak from France has compiled an 8-2 record in Gold A and MISS_IRAN has topped that with 9-2 in Silver A. pilogen (Italy) has had an outstanding season in Silver C with an 8-3 record and it's great to see that perennial Fibs favourite MacMom topping the Bronze division on 8-3, just ahead of fellow American twist on the same score. Last but not least, the Sesame division has seen lots of action with players from 9 different countries, including Ukraine and Hungary and all these players will of course be in Bronze next season. Mention must be made here of Alexander from the UK, currently on 7-0!

I'd like to expand a bit more on what I said about doubling in the last post, in the light of several very interesting comments. I think, in fact I am sure, that players below expert level are too cautious with their doubles. I don't think that this is because they under-estimate their winning chances, because they don't really think of positions in that way. Part of it is just pessimism. "What if she turns this one round, I'll be losing two points instead of one". Weaker players don't win as often, so they do tend to have a pessimistic outlook!
Here's a position that illustrates this, from a match with a student. 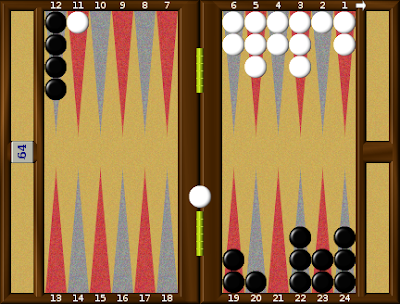 White is on roll and on the bar, and it's 0-0 to 5. Cube action?
This is in fact not a commonplace position and if you said, "I have thought about this and I don't think that it is a cube", that's fair enough. It's a huge blunder not to cube and we all make huge blunders from time to time, but what the student said to me was, "All I could think was, 'What if I dance?'" All he could see was the dark side, the 16 rolls where White danced and not the 20 rolls where White entered. This pessimism stopped him from even considering a cube.
In practice, if White does dance, Black is probably a very small favourite, certainly not good enough to recube, whereas he will be a huge underdog if hit and struggling even if White just enters. Very volatile positions like this are often cubes. I like to ask myself, "If I roll my worst, can he redouble?" If, as here, the answer is no, then that is a very strong pointer towards doubling. Still struggling to see this as a cube? Set up the board and play it 50 times with the cube in the middle and 50 times with Black owning the cube. You can actually do this simultaneously using 2 cubes. You'll learn something about the position, which is nice, but much more importantly, it will do wonders for your attitude in the future.
There is too a natural human tendency to want the match to last as long as possible. I don't know what the reason for this is, but it is very common. I saw this position passed recently. 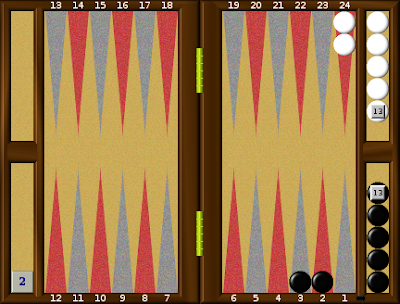 It's 2-2 to 5 and Black redoubled to 4. White passed. It's pretty easy to work this one out, White wins the match every time Black throws a one, so White will win 30.5% of the time from here. If she passes, White will have to win the next two games, so her match winning chances are 25%. Passing hands over 5.5% of the match equity. How bad a mistake is that? It is the equivalent of resigning the first game of a nine point match before you roll the first die!
I asked White why she passed. She said, "I didn't want to put it all on the dice." This remark is actually fair enough if she considered herself to be much the stronger player of the two, but no she didnt think that, she would just rather play than end the match right here.
How much stronger do you need to be to consider passing this? If you think that you can win a cubeless game against this Black player 55% of the time, that's probably good enough to make this a marginal take/pass.
What if it is Black who is the 55% better player? This is by the way a very big skill advantage. Should Black even be doubling? No, if he is that much of a favourite, redoubling here is a big mistake.
We've digressed a bit here, because whenever I discuss cube actions you should always assume that the players are equal, but for the player trying hard to be more aggressive, if you are distinctly the weaker player, positions like these where the dice decide should be meat and drink to you. In these positions, both players are momentarily equal and you should be delighted to see the cube rising.
One more interesting sideline on the subject of escalating the cube and of course shortening matches. At one time the GBots on Fibs used to play 25 point matches. The reason that they don't do that any more is that some players worked out that their chances of winning a 25 pointer against a GBot were better, considerably better, if they could finish the match in one or two games than if they battled it out playing properly. The tactic was to cube immediately, take any recube and immediately recube to the next level, ideally getting the cube to 32. Against a bot, this is a brilliant and entirely legitimate tactic, increasing your wins in a 25 pointer from about 5% to about 18%! This doesn't work against a strong human, because he won't treat you as an equal, but the bot does and this flaw is what you are exploiting.

We've by no means covered all that there is to say on this subject of becoming a more aggressive cuber, so I'll go on with it again tomorrow. Until then, as ever, enjoy the game!
Posted by dorbel at 01:10

Could the desire to string matches out as long as possible be a subconscious feeling that losing 5-4 is somehow "better" than losing 5-0, inherited from the many other games and sports where the scoreline is relevant? I've found it takes a lot of mental discipline to see matches as purely win-loss.