Today I received the results of David Escoffery's Fibs Fall Open, 2011. This long running tourney attracted 91 entrants at $50 a time and the results were as follows.

David McAllister (rastaman) from Australia defeated Matthias Krings (sita) from Germany in the final and the losing semi-finalists were Klaus Evers (Phoenix) from Germany and Roberto Litzenberger (roadkillbooks) from Argentina. Also in the money after reaching the last eight were the Americans Eddie Branch (eddiebranch), Scott Simpson (notverylucky), John Graas (jdg) and Chuck Bower (c_ray).
You can enter twice in this tournament and there is a consolation event as well. Thomas Lusk (USA) won this defeating Klaus Evers in the final and Michael Schoppmeyer (stoerchle) from Germany and Joe Potts (mrjoe) from the USA also cashed.
Entries are now being taken for the Spring Open, so go in the first instance to the rules page .
The draw is on March 25th. Lets give this excellent international tourney a full bracket of 128.

Two more cube positions from zyxtcba v. Backwoods. In this first one, Black (zyxtcba) is on roll leading 6-5 to 13. White is on the bar. 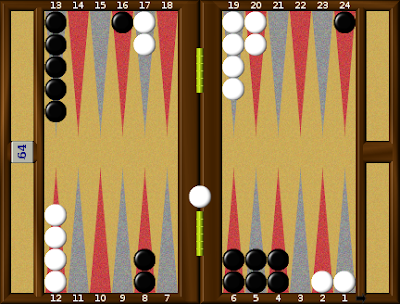 This is a very good reference position. Any time that you have made the 6-5-4 block, you should be alert to the possibilities of a double. I like to put a mental flag on it, saying "Cube Hot!" With a White checker on the bar Black should definitely be doubling this one. A lot of people would pass this, me included, but White has just enough going for him to eke out a highly marginal take. White's 5pt is made and Black has no active builders with which to press home the attack. His awkward stack on the midpoint will provide those, but that's a turn or two away yet. Does Black think that he is too good to double? We don't know, but there are two ways to approach this when you are not sure about that. The first is to play on and see what happens next, the second is just to double it anyway and I very definitely like the second approach. If it is slightly too good, well at least cashing puts a point on the scoresheet, but sometimes they take! If it isn't too good, then the double must be right. I guarantee that the last thing White wants to see here is the cube, so put it to him. I only play on when it is clearly right to do so.
A few turns later the game has progressed to something much more static. Black is on roll again. 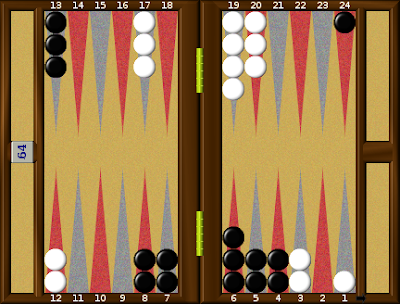 A 22pt anchor behind a five prime is usually a pass, particularly when as here, the doubler has one man back against three back for White. Either of these factors can make for a double on their own, together they are very strong. Worth remembering, this is quite a common situation. Black failed to double this though and cashed next turn when he was even stronger.
Bold cube action wins matches. The first thing that you will notice if you watch world class players in action is that they double very aggressively, more so than at any time in the past. The first thing that you notice about beginners (not that either of these players is a beginner, I don't mean that) is that they miss lots of doubling opportunities. Use dorbel's rule. "If I was him, would I want to be doubled? If the answer is no, turn it!"

More from this match tomorrow. Until then, as ever, enjoy the game!
Posted by dorbel at 00:25