Learning To Love The Cube. part 3

A Reader writes, "It's all very well saying that you think that we should double as soon as we think that it might be a double, but what should our winning chances be to make it right? When should we first think about doubling?"
This is a very good question. Let's take the second part first. When should we first think about doubling? I would say, whenever something good happens. You hit and they dance, you roll a great number to make a vital point, you escape, you roll a useful double. All of these represent a big leap forward. If one of these things happens, it's a great indicator that the cube is hot. If you are a beginner, just using this as your wake up call will work well, but the real trick is to get your double in before the good roll! If you can anticipate the likelihood of a big swing next turn, then you'll be doubling like a pro.
Now the first part, what winning chances do we need? Usually of course, you need to at least be the favourite, but there is no set threshold where it becomes right to cube. Your chances might as little as 53% and it be clearly right to redouble, or as much as 70% and still not have a initial cube. The key factor usually is the volatility. If it's a race or you are bearing in against a holding game, then things aren't usually very volatile and you don't need to make the take too easy. A correct cube will probably be in excess of 70% wins. If on the other hand it's a blitz or a position where the next roll will decide things one way or the other, then something much less can be enough, particularly if there are some gammons about.
So, what sort of thing are we looking for in order to anticipate our good roll and get the cube in before the party starts? Look at this position. 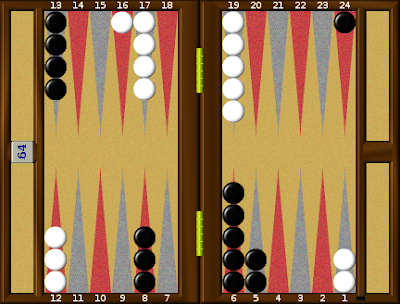 Black is on roll and leads 1-0 to 5. This isn't an immediately obvious cube, but it's actually quite strong. What are we looking for? Black leads in the race 140-158, more than two average rolls. He's made his 5pt, while White has no points yet and Black has also escaped a checker. White too has one loose checker and her back men haven't moved yet. Black is already very strong, winning about 68% if the game is played to the end, with around 17% gammons, but crucially this is actually quite volatile. Black has a range of threats. He can hit the blot or make the bar or another inboard point, or escape to the midpoint. When he can't do any of these things, he can just make a safe quiet play. After that it will be White's roll and on her turn, she has almost no threats and some difficult rolls of her own with those awkward stacks. This recipe, a variety of threats and no really bad rolls, is always the basis of a cube.
In the match, Black didn't double and ran out with a 5-4, then White rolled 5-2 and made her 4pt. 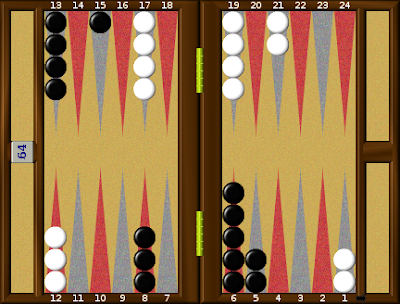 Nothing much has happened but Black has lost his market and this is now a clear double and pass. The race has got shorter, Black has increased his lead and White now has to try and win with an ace point holding game. In real terms, Black's wins have jumped to 73%, but his gammons have dropped to about 11%, although I wouldn't attempt to calculate that over the board. I just know that an ace point game and nothing else is a pass!
If boldness is our guide when doubling, should we be bold takers too? We'll look at that tomorrow.

A new site to me is WarpGammon but it comes well recommended. They have regular tournaments, mostly free entry, but there is one that costs $11 to enter which should be fun.
You can play your matches on various servers, including SafeHarbourGames , a nice friendly site where I have played once or twice. Venture out!

Fibsleagammon season 55 has now finished. Provisonal result. From Master A perennial rivals dorbel and BushSucks will cross swords with stukatz and Mason_Verger from Master B in the playoffs.
These should be terrific matches with a high standard of play, so I'll try to tell you when they are scheduled.
Until tomorrow, enjoy the game!

"I just know that an ace point game and nothing else is a pass!" An interesting aside. How true is this?

Thank you Timothy. I think if you re-read the article you will see that this is the point that I am trying to make.
Thank you Robert. Show me an exception. I'm sure that there are some, just not very many.