Learning To Love The Cube, part 4

In the last three posts, I've been making the point that very early doubling, particularly in positions where there is a strong gammon threat, is a tactic likely to lead to more wins for all of us. It's the way that the bots play and it's the way that the best humans play too. Even when the cube is too early to be technically correct, it can still reap benefits in two ways. It can generate a wrong pass, not common but it does happen and it also means that you can't then miss a string of correct doubles and wind up cashing when you are too good, a very common occurrence. A student makes the point that when this happens the bot doing the analysis assigns an equity loss to each of these events and adds them together. "This can't be right" he says. I put this point to the leading technical expert Rick Janowski and I quote his reply word for word, as I can't better it.

RJ: Your student has a point. XG adds all the errors together which over-emphasises the scale of the error.Taken to its extreme a run of several very similar cube errors could result in a total equity error much greater than the overall value of a game, which cannot be right. Nevertheless, missed cubes can still result in substantial cumulative overall equity loss, whereas early doubles do not carry the same ongoing risk.

In the comments, Robert Fontaine takes me up on a side issue, where I said that an ace point anchor on its own is always a pass. "Is this true?" he asks. Like almost any statement in bg, I could hedge this one round with lots of ifs and buts, but it's mostly true once the attacker has escaped to the midpoint. Here's a case in point, from the very next game after RF wrote his comment funnily enough. 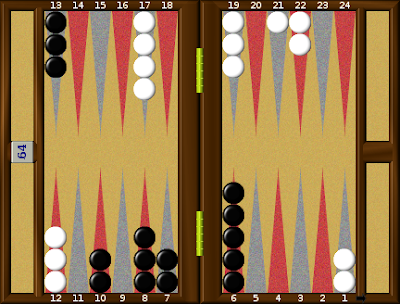 Black is on roll in the first game of a three point match, at which score this is a huge pass. It's still a pass for money too. White just doesn't win enough games. A very important factor to consider in any position where hitting a shot is vital is, "Is my home board ready to contain a hit checker?" Here it isn't and White must give it up.
When you put this position and others like it through the bot that you use for analysis, you will find that not doubling in this position is only a very small mistake in terms of equity loss. This is because you can almost always cash next turn anyway and will rarely become too good to double. However failing to recognise that this is a cube is a big conceptual mistake! People commonly play on here thinking, "I'll just wait and see if this gets more gammonish, as he's certain to pass if I double now and I'll only get one point". True, but (a) he may get a joker sequence after which you won't even have a cube and (b) if you double now, you may get a wrong take anyway and (c) you don't want to have to keep making "Should I double?" judgments for the next 15 or 20 rolls. It's something of a truism that people playing on for an undoubled gammon against an ace point anchor are either making a mistake or have already made one! In certain positions though and at certain scores, this does become a more attractive option. 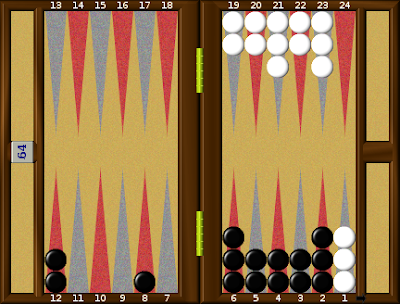 I'm playing Black here, leading 1-0 to 5. White, a decent checker player but notoriously timid cube handler, has missed five opportunities to double me in or out in a prime/prime battle, after which I rolled 6-6 to end up here. With White having three men on her anchor, this is too good to double even though there are a few joker sequences that can lose for Black. The tragic sub-plot is that I accidently clicked on double and White gratefully passed!

Finally, if our attitude towards doubling should be bold and aggressive, pushing the boundaries of what is technically correct, how should we view our take/pass decisions? Falafel, perhaps the best player in the world, says, "If in doubt, I take". This works well for him, because his superb checker play and the possibility of his usually inferior opponent making errors, means that he can approach or equal and sometimes even exceed the theoretical equity of the position. Should we imitate this? I'm not sure that we should. In all positions other than simple races and holding games we will struggle to approach the theoretical equity and may also fail to use the recube efficiently if things go our way. Having always been in the "inclined to take" camp, I am now trying to pass the close ones, even if this means giving up some equity here and there. This is because I now use XG and its collected stats show me that I lose more from wrong takes than I do from wrong passes, particularly of course, the ones that have a lot of gammons attached. Look at it like this. We can be inclined to be bold when we double, because these decisions occur in games where we are winning. Take/pass decisions occur in games where we are losing and we only get one chance to get it right. The hardest of these are unquestionably blitz positions and I will trawl up a selection of them for you to look at in the next post.

I don't understand Rick Janowski's comment. It's perfectly possible in a money game for errors to add up to more than 1.0 or even 2.0. Your equity at any point is controlled not just by your errors but by the luck of the dice.

I suspect that your student is thinking something like this: "The total equity loss is the amount I would have expected to win back had I played the game over again without making all those mistakes." This is a plausible line of thinking, but it's not what the bot is measuring. The trouble is that, in a string of missed doubles, if you had gone back in time and doubled correctly at the first opportunity, then you would not have had all those subsequent cube decisions to mess up. The bot is measuring how bad your decision was given that you had that decision to face. While this may not be measuring what you want it to measure, there's nothing wrong with the bot reports as long as you interpret it correctly.

If you think about it, the idea of replaying the game without making all your mistakes doesn't quite make sense anyway. If you make a different checker play, then the rest of the game unfolds differently. Similarly if you had doubled when you should have, you might have been faced with a take/pass decision later that you never actually faced. There's no reasonable way to measure these what-if scenarios, so what the bot actually does is, in my opinion, what it should be doing.