In the last post we were looking at a five point match. White leads 1-0 and holds the cube and things have gone her way. There's a very strong resistance to recubing anything that has a strong gammon chance at this score for obvious reasons. Here's White on roll in the position immediately following the last position in the last post. Black is on the bar but has managed to grab the 20pt anchor. 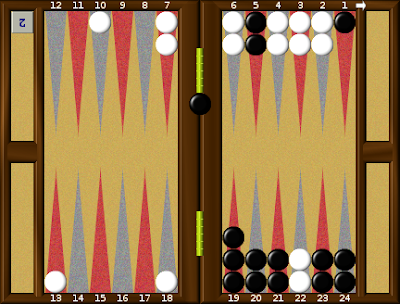 White was too good last turn but with Black having anchored on the 20pt, she can't be too good now. Is she good enough to redouble? It's close, but XG says that she should. How might we arrive at that decision OTB? It's very tough. To me, just looking at it as it stands, it doesn't "look" like a cube. Black will certainly have a game if he can enter somewhere soon, but he can also enter awkwardly. White can lose her market when Black dances again and when she can make the ace point on Black's head. Can't blame anybody for not redoubling this one though. 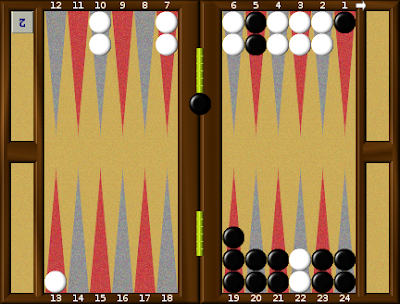 White didn't double and Black danced. Now the redouble is very clear, almost too good in fact. White should redouble and Black should pass, as he has dipped below 25%. He will have a game of some sort if he can enter quickly, but when he can't, his blot on the 24pt is very vulnerable, particularly to doubles that usefully switch points. Again White chooses to roll, a reasonable decision if a small mistake. 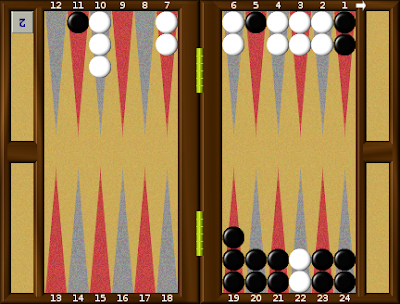 Black has entered on the 24pt and been forced off his 20pt. Although White can now attack him there and will, even if she has to hit loose, this isn't technically good enough for a redouble that puts the match on the line. However, it's very close to being a redouble and a 7% chance of a wrong pass is enough to make it correct? There must be that surely? White should recube and give Black the headache. It can't be stressed too often. Look at it from the opponent's point of view. Does Black really want to take this one on for the match? The bot says that he should, but players aren't bots and will be thinking things like "3-0 down isn't so bad" rather than the more useful "have I got 25%?"
Again White didn't double and rolled 3-1, played 10/6. Black rolled 5-1 and made a fatal error, playing 14/13, 6/1. Suddenly White has one more spare and Black has one less. He should have played the brave 14/8, duplicating fives and keeping his checkers in play. That leaves this last position. 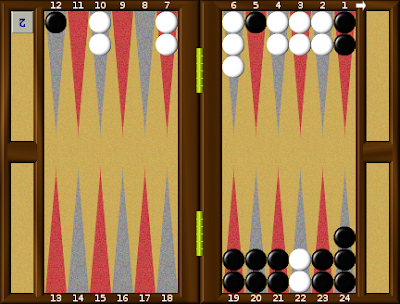 White hardly had a recube at all last turn, now she is too good again! A recube is a large error and Black mustn't be given the chance to pass. I'd really like to know whether White took these four decisions by assessing them well, or whether she just thought, "Haven't a clue, let's roll and see what happens next"! I think all of these are too tough to assess with a sufficient degree of accuracy to make a guaranteed correct decision. If I was White in these positions, given Black's strong board, I'd have been doubling to see whether he was prepared to play one of these for the match. As I said at the start, cube holders 4-away are very reluctant to redouble and in my experience the player 5-away is very reluctant to take, so it's a bit of a stand-off!
I would recommend playing Position One here for practice after doubling. If you can get this one right and redouble, you'll be spared all the other decisions! Let me know if you managed the theoretical equity of 71-72%.
Until the next time, enjoy the game!
Posted by dorbel at 08:08