For the player trailing in a short match, his cube strategy can be summed up in the immortal words of Uncle Jake (Jacobs), "Develop an enhanced gammon threat and ship it in". Not very difficult, certainly a lot easier than entering the murky world of gammon prices and match equities at this stage. It is an infallible guide, in which the worst that you can do is give the cube away a bit early. It is worth expanding slightly on what constitutes an "enhanced gammon threat" though. At the start of any game you have about a 13% chance of a gammon if the game is played to the end, so around 20% gammons can be considered "enhanced". However, we can face some difficult decisions, notably when we have thrown a joker and suddenly jumped from not good enough into the "Am I too good?" area. 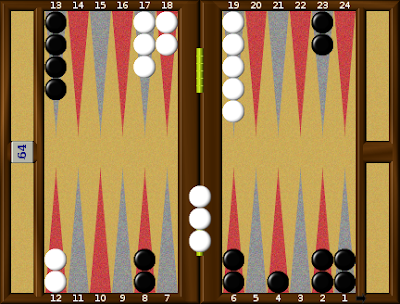 Black trails 0-1 to 5 and has just thrown 6-6 to hit three checkers and make his 2pt. White has fanned. Too good to double? Over the board I felt that this was much too good, after all, isn't it a bit wimpy to cash when your opponent has three men on the roof? A rollout suggests though that Black has the same equity whether he doubles or not, 1.00pt. Note that as advertised here ad nauseam, the cash is a real point, the play-on is theoretical and you have to play to get it. This is actually a reference position, although probably too rare to be of much use.
I rolled and covered the 4pt and White entered a man. 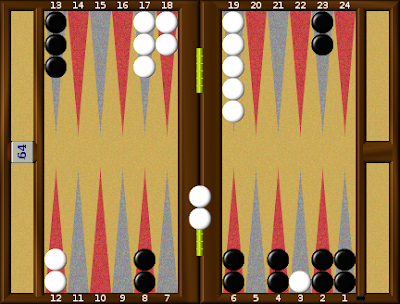 This is now clearly too good. Black has improved his board and White's entering checker isn't enough to balance that. Everybody plays on, nobody takes, but note that Black's equity after rolling is still only about 1.1ppg. What happened next? 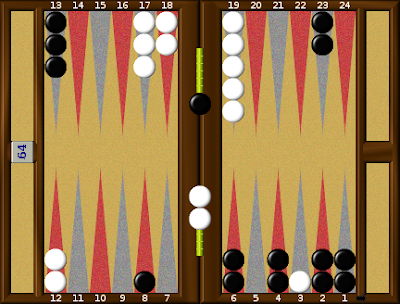 Black hit loose and White entered with a hit to leave this position. In the previous two positions it's been in my mind that even if White enters with a hit, I'll still be able to double from the bar and here it is, Black cubes. This is a big pass. Positions where you have a four point board and a man on the bar and another blot to shoot at are almost always passes. Here White still has two on the bar! Nevertheless, it's bonanza time for Black and White took, a double blunder and Black's equity jumps to around 1.2ppg.
The game took some wild turns from here as White entered everything with a 3-3, followed swiftly by a 4-4 to build a board and here is White on roll considering a recube. Remember she leads 1-0 to 5. 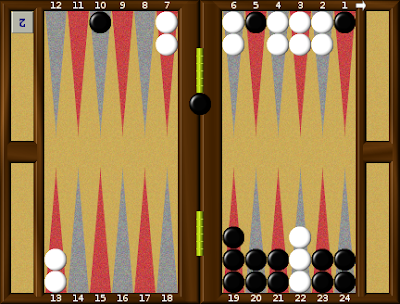 Recubes are very tricky indeed for the leader. If she doubles and gets a take, she'll be redoubled for the match with gammons not counting, so the great majority of White players holding the cube at this score are reluctant to turn it, yet another reason to give it to them in the first place!
Black can take with better than 25% winning chances as his equity at needs 5, needs 2 is 25.64%.
Here, he is just a little short of that, but White wins around 37% gammons from here, so by a small margin it is technically correct for her to play on. Her match equity is about 75.5% if she doesn't double and the same if she doubles and gets a take. If Black passes that drops to 74.64%.
Phew! Is there any way to sort all that out over the board? Not for me there isn't. I would play on here thinking myself too good and you can arrive at this correct decison just by fudging it if you say "No idea what's right so I'll take a roll!" However, once again, turning the cube is a good practical move. You score two points if you get a cash for which you pay a small premium and when Black makes a small error, your ME reverts to what it would be if you hadn't doubled!
Whatever you ultimately decide, you must get into the habit of allocating a lot of time to positions like the above. Run through a mental list of rolls, decide how you play them, put them into groups. In this position, I don't ultimately think that it is going to help you decide what you should be doing, because the differences between right and wrong are so small and the complexities are so large, but there will be positions where the process of "reading the numbers" makes your cube action very clear. If you haven't practised it a lot, with positions like this you aren't going to be able to do it in a match.
In live play you have to do this in your head and you are supposed to do this online as well, although I suspect that pencil and paper is sometimes called into play. This is actually cheating, but it isn't cheating to practise like that. Practise playing this one too, it's very instructive!
I'll bring you a bit more from this game in the next post.

BushSucks won the Fibsleague season 55 play-off for a record equalling fifth title, defeating your correspondent in a 2 hour battle over 13 points, so back to the drawing board for me. Until the next time, enjoy the game!
Posted by dorbel at 11:10