One of the beauties of this game is the bewildering variety of different scenarios that you have to master. There isn't just technique, there are techniques in endless permutations, some you may only see once a year, some once a week, some daily. There is no doubt that working on daily situations will pay the biggest dividends, but now and again it's nice to look at something a bit different. Here's a series of doubling decisions from a recent match. 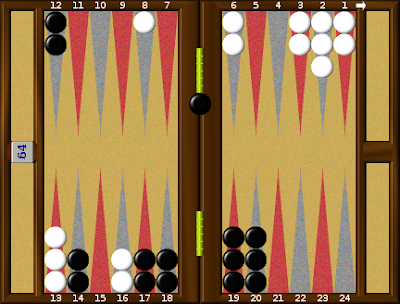 White is on roll, it's 0-0 to 5 and Black is on the bar. Cube action?
It's my guess that you will take longer over this here than you would in a match. Perhaps it should be the other way round! Anyway, White has semi-escaped and leads by 31 pips (105-136) and Black is on the bar against a four point board. White doubled, correctly and passed the headache to Black. I can tell you what went through Black's head, because it's me. I thought, "I've seen this before and it might be a close take, but I'm really not sure, so based on the fact that I've taken a lot of passes lately, I'll give this one a miss".
Tragically this cost me about 0.3 of a point, a triple blunder! Here's a list of the mistakes I made.
I didn't take long enough to think about it.
My decision was influenced by recent events, rather than viewed in isolation.
I didn't consider carefully every checker on the board.
This last was the worst. Here's what should have steered me towards a take.
White has seven checkers out of play, so from here she can only use eight checkers. All my checkers are in play.
White hasn't completed her escape. Move those two checkers on the 16pt to the 13pt and this is a very powerful double, worth 0.903ppg after double and take, compared to about 0.685 in the position above. This true even though it leaves White with a stack on the midpoint and a single blot in the outfield, a famously weak formation. This position is much more like what I thought I remembered.
White also has to cross an untenanted outfield, again a big positional defect. Move a checker from the 13pt to the 8pt in the above position and White's equity jumps to around 0.987 after D/T, making this a very valuable reference position, so here it is. 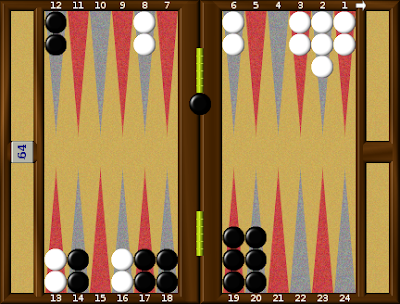 Now White has a landing point, no immediate blot and an extra checker for attacking. This is as near to a marginal take/pass as you can get, so worth remembering. Any improvement for White, it's a pass, any improvement for Black, it's a take. We haven't really said anything about Black's checkers, but that powerful four prime is very important. It would be even better if it wasn't "front-loaded", with the spares balanced on the inner edge, so any improvement there would help Black for example.
As I say, well worth remembering, even though you won't see one close to this very often, but there is a whole family of other positions where Black is on the bar and White has a four point board with a big hole in it. Doubling these generates a lot of wrong passes and if you would have passed position one, perhaps remembering this one will give you more confidence in the future.
We'll look at some more from this match tomorrow.

On Saturday 24th at 0900UTC, I am playing BushSucks in the final of Fibsleague season 55. It will be a 13pointer and I hope well worth watching. Whisper command only for watchers please.

Also this weekend, on the 25th, David Escoffery will make the draw for the Fibs Spring Open. There's already about 100 players in, generating a $5,000 prize pool, so why not give it a go? Rules on http://www.escoffery.com/spring.html , get your entry in quick. You can pay after the draw, but paying with entry is worthwhile as only paid entries can receive a first round bye.
Hope to see you there, until then, enjoy the game!
Posted by dorbel at 06:13