The Major Split, Right Or Wrong?

Two interesting comments on my last post. In the first Boop commented that it should be possible to program the bot to assess the opponent's playing strength on what it observes in the match and adjust it's cube action accordingly. I expect that this is possible, although my knowledge of computer programming is on the level of an amoeba, but whether it is desirable or not is another matter. At present, when a bot analyses a position, it makes an objective assessment based on the assumption that its opponent is a player of equal strength. If you make it play according to the strength of its opponent, then those who want to learn from the bots will see it making plays that may be optimal to deal with a beginner opponent, but not actually the best play otherwise. In my view it's better to let the bots do what they do and make our own adjustments based on a known bench mark.
David Levy also raises the point that I failed to mention market losers. If your opponent opens with a 3-1 he argues, it is correct to double but equally correct to refrain from doubling. This is absolutely true. If you are strong enough to recognise when you have any market losers (one sequence is enough), then I agree that not doubling may be right. If you are not confident whether or not you have any market losers or even what a market loser is, then turn the cube and concentrate on the game! You cannot make a mistake on your first turn, but you can on your second and subsequent turns. If you don't know exactly what you are doing, why risk it?
This post was written in reponse to several fibsters who queried why a bot would want to double on the first turn in a 2 point match. David is probably in the top 1% of players in the world. You can see why he thought it inadequate!

I have an American student who is a model of how to study. Here is an example and here is the position.
Position A 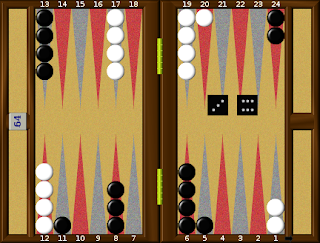 Black trails 4-away, 3-away and has 6-3 to play. He chose 24/18, 8/5 which is a blunder, costing about 0.11ppg. The best play is clear, 13/10, 11/5 and I commented (with hindsight),  "The 18pt is a bad place to be hit when the 5pt is slotted. Note too that the match play, as well as leaving three blots, rather leaves the checker on the 11pt with nothing useful to do at the moment, whereas the XG play leaves active builders on the 10 and 8pts, very useful."
All very well and true as far as it goes, but then Ace Student reminded me of a position from a previous match. Here it is.
Position B 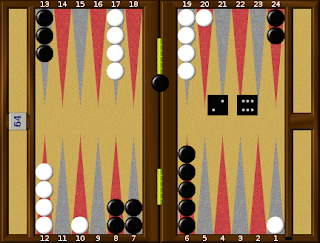 Now it's 5-away, 5-away and Black has to play 6-2 from the bar. Here he played bar/23, 13/7, a play which I critiqued as follows.
"I view this type of position with your forces in the role of defenders in a castle. Your play has your forces staying within the walls and declining contact in the hope that things will get better later. Sometimes they do, but more often those checkers get primed and you get doubled out in a roll or two. The XG play forces contact now with a bold sally out through the main gate, in the hopes of exchanging hits and/or making the high anchor that will keep you in the game. As so often, this bold approach pays."
You can see the problem here. In the first position, it's very wrong to make the major split, but here it's very wrong not to do so. He asked, "Why in one case it is correct to split to the 18pt and in another it is not?
The reason 'bad place to be hit when 5pt is slotted' can be applied in both cases."
I expect you want to know why too!
The bar is a bad place to be hit in both positions. The point is that in Position A it isn't a risk worth taking. Black only has two men back and he can play all of the roll very productively on his side of the board, making the 5pt and putting his checkers in excellent shape to build a prime. Also, White's back checkers haven't moved. In (pos B) it is still a bad place to be hit, but now it is a risk worth taking, one that is almost forced on Black. He starts on the bar with three men back, whereas White has partially escaped one man. On his own side of the board Black hasn't yet made a point inboard and his checkers are very awkwardly placed to build a prime. All this means that staying back with three checkers deep in White's board is not feasible and Black has to fight for life now or face being doubled out in a turn or two. Either way he is a clear underdog, but definitely worse off if he doesn't split to the bar.
In position A there just aren't these imperatives to split. Both sides have two men back and Black has a small race lead. He is a small favourite in the game. A nice quiet play is fine.
Splitting to the opponent's bar, whether the 5pt is slotted or not, always has dangers. We just have to weigh risk against gain and treat each occasion on its merits, because there are no hard and fast rules and there can't be in a game where the position of all 30 checkers has a bearing. We do have a tendency to just focus on the point in question, White's bar point in this case and to look at the extra hit and cover numbers, but every piece has a part to play. If you haven't looked at all 30 checkers, you run the risk of making a big mistake.
We can't learn backgammon by learning moves, we have to learn to think about the game while it unfolds. This is a paraphrase of something that Emanuel Lasker said about chess and if anybody knows the original quote, send it to me please!
Until the next time, enjoy the game!

My take on the position is that making the five point is mandatory and it's good to have a spare on the 8, so 11/5 is clear.
Making the 5 by playing off the 8 strips the 8 point and gives the blot on the 11 no direct chance to make a homeboard point.

Then the choice is to bring one down form the middle or split with the 3. After reading your recent diatribes about the virtues of early splitting I opted for that. Plus, the split puts pressure on white's slotted 5 point.

XG 3 ply rollout of 1296 games has the two plays within the margin of error. I'm not sure which is actually better - it's close enough that I don't sweat it.

The split is a reasonable alternate and I should have mentioned that. My rollout of 2592 has it inferior by 0.021, which is well within the confidence interval and this is certainly not enough for me to say that 13/10, 11/5 is "clear". I think it is probably right though. Thanks for pointing that out clem.

I believe that boop is far too optimistic in thinking that it would be easy to program a bot to analyze its opponent's play on the fly and adjust accordingly. It's true that it would not be hard for a bot to estimate its opponent's error rate on the fly and swap in an asymmetric MET. But this would usually not cause the bot to hold the cube very long at 2-away/2-away.

Getting computers to analyze human play and adjust accordingly would, in my opinion, be a wonderful advance in bot technology, as I suggested recently on the BGOnline forum. But Xavier Dufaure de Citres, the programmer of eXtreme Gammon, said that this would be a VERY complex problem. And Xavier probably knows as much as anyone on the planet about programming backgammon bots.

Of course it is, thanks.