One of the hardest problems that we face in the early part of the game is when and how to split our back checkers. For a variety of reasons we do have to get them moving. They are vulnerable to being primed where they are and while they are static back on the ace point, our opponents can bring down builders from the midpoint without much danger. Once you have split them, your chances of improving your anchor get better and your coverage of the outfield doubles. The downside of splitting is that you are vulnerable to being attacked, but as you can't win the game without moving them, they do have to get off the ace at some point. It's my belief that for most of us, the time to split is on the first roll, when the danger of being attacked is at its lowest and our opponent is keen to bring down builders to make points. Generally speaking, the computer rollouts support this tactic at level scores and the balance tips even more in favour of splitting when you lead, less so when you trail.
Splitting does have one major benefit for most of us though, which is that in my view, it leads to games that are slightly easier to play where we will make fewer mistakes. The more skilful players, experts and above, like to make the more complex plays, slotting their 5pt aggressively and bringing down builders rather than splitting. For them, this is a good tactic, making the game harder to play so that they have more chance of outplaying their opponent. For the very great majority who will never reach this level and don't particularly aspire to do so, the split play will pay dividends. 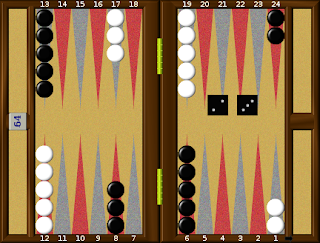 It's the Crawford game and Black trails 0-4. White is the stronger player of the two. Black chose 13/10, 13/11. This is, according to the rollouts a minute mistake, 0.004ppg less than optimal so just about as unimportant as it can be. However he should split, partly because it's minutely better, but mostly because it makes the game easier to play. There's no cube in this game, so the back checkers have to move to win the point and the decision of when and how to split them is only going to get harder as the game goes on. 24/21, 13/11 is the usual split with this roll but 24/22, 13/10 is almost as good with the same equity as the two-down play. Worth a try on novelty value!
On his second turn, Black already had a tough choice. 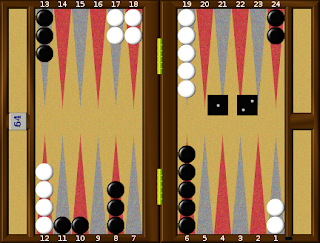 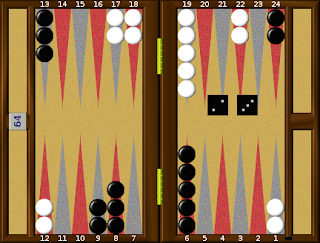 Black played this 24/21, 13/11, on the face of it an entirely reasonable play, looking to make progress on both sides of the board. This is another error though, about 0.068 this time and he should play 13/10, 6/4. Not many people will find this play OTB. As a rule, we are all (often wrongly) hesitant to slot after the opening roll and it's actually quite rare to slot the 4pt with the 5pt empty and it's also rare to want to slot when our opponent has a better board. What makes it right here? The secret lies in the stacks that both players have on their 6pts. These need to be developed and soon and for White it is even more urgent than for Black, as she has no other active builders. Doublets aside, she isn't going to have much chance of converting her stack into a prime, so she will welcome the chance to attack on her 4pt. Splitting also turns her 5-5 on the next turn from a disaster into an excellent roll and the huge swing on this one roll is quite important. Black's stack also has to be developed and the 6/4 slot is a nice way to do it, giving him good sixes next turn too. This play is more attractive here than usual, as Black can't lose a gammon, but it still looks right even at normal scores.
One useful tool for me is the use of mental flags, highlighting features of the board that are important on the next turn. I like to put a flag on stacks. The flag on my own stacks says "Unstack me now". The flag on my opponent's stack says, "Danger of falling checkers, keep clear". Try this one yourself, it's often a useful tool, steering us in the direction of a correct play.

So to recap, split early. It only gets harder later!

Good post. In the final position, I believe the chief reason that splitting is a blunder is that White has just rolled 55, bringing two more checkers into the zone and getting a huge race lead. (In my opinion this is more significant than the other factors you mentioned.) Splitting opens Black to attack, and furthermore Black doesn't want to race when so far behind in the race. His best chance is to steer for a priming game, and 13/10 6/4 is the purest way to do that. Getting hit isn't so bad when Black is anchored and already behind in the race.

The same theme occurs frequently in the opening. If your opponent rolls 55 on the second roll of the game and plays 13/3(2), then you should almost never separate your back checkers on your subsequent roll. For example, say you win the opening roll with 31, making your 5pt, and your opponent rolls 55 and plays 13/3(2). Now you roll 65. Most players would play 24/13, but 13/7 13/8 is better. However if your opponent had rolled 53 and made her 3pt (instead of rolling 55), then 24/13 on your third roll would be best.