The Return of the Dorbel Daily

Well, after a five month break from this blog, I feel suitably refreshed and inspired to re-start it. One of the major problems with the old blog from the reader point of view was that it wasn't in fact daily. I intend to try and rectify that and bring you something each day for us to think about. These will always be drawn from real play and the object is not to find you fascinating, rare and difficult positions, although I hope that there will be some, but to try and build up thought patterns that will help us to deal with the problems that occur a lot. Dealing with a recurring problem that often generates  an error can pay bigger dividends than eliminating a blunder in a position that occurs once in a Blue Moon.
Here's the sort of thing that I mean, an early 6-4 and should I make the 2pt? 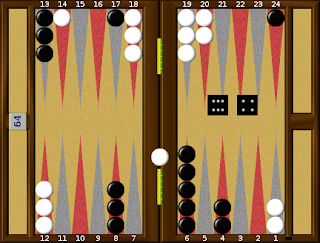 It's dmp and White is on the bar. I decided not to make the 2pt and instead played 17/11, 13/9. This creates two new builders for vital points and cuts down White's return shots, a nice pure old-school play. Staying pure at dmp is very important right? However, this turns out on analysis to be the second best play and making the 2pt is best. Can we say why?
The first thing to note is that Black has made the 4pt without using any of the spares on the 6pt. One of the reasons for not making the 2pt early is that our spares are needed for making the more important  5, 4 and 3pts, but once one or more of those are made, we can be much more free and easy with how we use our spares. Also, playing 17/11 leaves the last checker on the ace point rather isolated, with an eleven pip gap to jump in order to rejoin the rest of the force. Note too, that although 17/11, 13/9 cuts return shots from 12 to 6, it also lifts the pressure on White's 11pt blot. Lastly, a point is a point when all is said and done and making another home board point gives White nine numbers to dance next turn, not four! These five extra dances neatly cancel out White's six extra return shots.
Can we do all this thinking over the board? I don't think so. Not only will the game become insufferably slow, but we will quickly exhaust our brains and be in no shape to play well later. What we can do though is to try and do what I have just done here when we do the post-match analysis. Hopefully some of that will get stored in our sub-conscious and reappear in a match when we need it, although we may never see this exact position again of course. However, you may like to try my flag system! This flags particular features of a position with a mental pennant, so that we keep it in mind in our decision making. Stacks with five or more checkers are of course very damaging, the "silent killers" as Robertie calls them, sucking the life out of our position with their inflexibility. Fly a mental flag from the top of your stacks bearing the message "PRIORITY: UNSTACK ME PLEASE". If you still have a stack on the 6pt and you have already made a point inboard, colour the flag fluorescent pink!
I'll have a look at a later position from this game tomorrow. Until then, enjoy the game!

Your'e back ...brilliant, your blog is tops

Great to have you back Paul. This blog is the place I always come to for things that seem most relevant to my game. Alway inclusive an always interesting.
Keep it going.