Two On The Bar. Always Better By Far?

Given the chance to put two checkers on the bar, we usually grab it, "Two on the bar, better by far" as my old friend Graeme Sievers, a British Open Champion in the nineties, used to say. Here though is a nice example of when that old saying leads us astray.
It's dmp again, with Black to play 6-6. 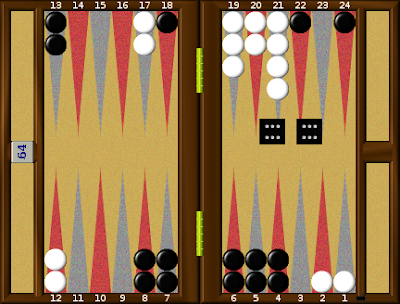 After a bit of thought, Black played what might be considered the default play, 8/2*(2), 7/1*(2). How bad can it be to put two on the roof and make a five point board? Here it's a large blunder costing about 0.08 ppg or if you prefer, this cuts Black's game winning chances down from 79% to 75%.
What's wrong with Black's play? The key strategy in one point matches  is to stay pure and this means relying very heavily on primes to win the game and also keeping all your checkers in play and connected.
Connected just means within six pips of each other. In play means not comitting checkers to the lowest points in your board, where they can't be used any more.
You can see here that the blitz play gives up the prime, disconnects the checkers on the far side of the board and buries four checkers deep in Black's board. There's more to this position though, which we can see by looking at White's checkers. She has four checkers balanced on the end of her broken four prime, it is front-loaded. This is a very bad situation for her if she is forced to play next turn, but putting her on the roof means that she won't be forced to crash.
The best play here looks like 24/18, 22/10, 13/7 and 24/18, 22/4 is a fairly close alternate.
What can we learn here? Stay pure in dmp games, priming and connectivity are the key. Particularly here too, look at every checker on the board. It's so easy here to focus on Black's checkers and those blots that White has, but looking at all her checkers quickly shows how fragile her position really is.
It wouldn't be too difficult to edit this position by bringing Black's checkers around until the point where blitzing becomes correct, but I'll leave you to do that for yourself. Why should I do all the work?
Until tomorrow, enjoy the game!