Picture the scene. It's an important match, there are watchers and worse still, it's a team event. You are in the spotlight and and you get an ultra tough roll. Even the strongest players can blunder here. Look at the position below. Black, a strong expert, leads 10-8 to 11, post-crawford, after at one stage leading 10-3 Crawford with one point left to clear for victory. All of this adds up to pressure, particularly now he's reached this score and a gammon loss is the match lost. 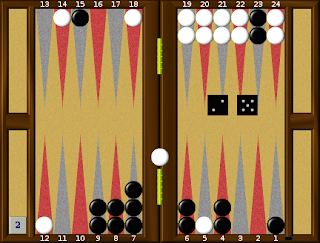 White is on the bar and Black rolls 5-2. The cube is dead, the gammon threat is one way and the obvious hitting play and the more adventurous double hit are suddenly not so appetizing. What should Black do?
The first plan to abandon is 8/1 to cover the blot and make a three point board. This burns Black's major asset, his broken five prime and it isn't even very safe, leaving 14 indirect shots. It does of course give White nine numbers to dance as well, but she won't be worrying to much about that I think.
Black actually tried 15/8, keeping his prime, adding a builder and cutting the shots down to eleven. He succumbed to the temptation of keeping the anchor as security, because of gammon fear and possibly, the very common failing seen at all levels of not wanting to put the match on the line now.
One of the best ways to avoid the gammon is to win the game! After hitting, Black is the clear favourite (56%) to win the game. After the quiet play he is the clear underdog (40%). He'll lose 23 gammons after the hitting play, but he still loses 15 after playing quietly. It's no contest and 15/8 is a big blunder, cutting his match winning chances by about 4.3%
The best play is 23/18*, 15/13, keeping the shots down to 12 and quite importantly, knocking away White's valuable slot for the bar. It does of course expose Black to the danger of being closed out after a hit, but White doesn't have much in place to go for that after she has two checkers on the bar. Even when she enters those, they are fairly well primed.
When it's your turn in the spotlight, be brave! Play to win, not to avoid losing. Black here is in a poor psychological state to play aggressively. He had the match all but won half an hour ago and he has been on the defensive ever since as game after game has leaked away. When you find yourself in this sort of position, which you will one day, try to think like a predator, not a prisoner.
Until the next time, enjoy the game!

Glad to see you're back, Paul!

How bad is the double hit here? That's what I would have been tempted to play.

Hi TC, thank you. I look forward to your comments with interest.
The double hit came in third, a small blunder costing around 0.12.
As you might imagine, it wins and loses more gammons, so with Black not interested in a gammon, he needs to eschew a position with five blots.
It's still a distant third for money, a very close third at dmp and of course at GammonGo, you'd hit two in a heartbeat.
Two eminent kibbitzers also thought that the double hit might be right, so you would be in good company! If Black had a live builder for the 5pt it would be more attractive, but still wrong except at dmp.