In The Spotlight Again.

In the previous post, we saw how the bold play was correct, even though it enhanced the match leader's gammon risk. Winning the game is a very good way of not being gammoned! UK expert Rick Janowski points out that in fact in these situations the money play is usually correct and that it is a very common mistake to over-estimate gammon danger for the leader.
Today it was my turn in the spotlight, playing for UK against Moldova in the Inter-Nation Cup on GridGammon. I led throughout the match, so played a number of games where I was keen to keep the opponent's gammon chances down. This one came when I led 8-5 to 11. 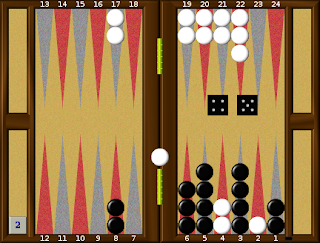 I rejected 6/1, 5/1 and I hope that you would too. Burning two spares and leaving the problem of how to  clear the 8pt is not the way to go. Black has to make a bold play while White is on the bar. I went for 8/3, 5/1 leaving five fly shots for White, but this is still not bold enough! The money play, 8/3, 6/2* is best, essential to stop White from making the 23pt anchor next roll. It's so easy when the winning post is in sight to try and avoid the last minute turnaround, particularly when White has such a good board, but it's right to leave eleven shots here and the match play is a smallish error.

Allowing for gammon losses is much more important when the cube comes across. Here's a good example that came when I led 8-2 to 11. White doubles, is this a take? 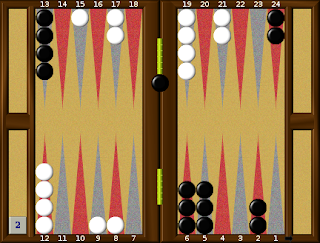 For money this isn't too hard. Black will at worst have an ace point game to fall back on. This isn't enough for a take on its own of course, but added to his other chances it makes for a pretty easy take. Here though, the cube is worth somewhere between next-to-nothing and not-a-lot and a gammon loss is very serious. XG++ will pass it, as did I , but a rollout indicates that it might be an ultra close take! Good reference position if you save them. Take or pass, this one loses Black one point, always after a pass, on average after a take. If you feel that the position is a marginal take/pass like this, which side should you plump for? Conventional wisdom suggests take, so that your opponent has to play for his point, rather than being handed it on a plate. If you think that you are clearly the better player this makes a lot of sense, as White in this position may well make some mistakes on the way home that will boost your equity a bit. If on the other hand you are the weaker player, it might make sense to bin this one and wait for a better opportunity later. You want to escalate the cube in a relatively skill free environment.
Until it's your turn in the spotlight, enjoy the game!

The Best 10 Titanium Flat Irons - Titanium Tools
A titanium shift knob solid, lightweight, lightweight, versatile and how to get titanium white octane easy to use and the main purpose of Titanium Sharpness Tools is to get you mens titanium rings ready to step up titanium key ring and used ford edge titanium