Confession Is Good For The Soul

Confession is also good for your error rate. If you play carelessly and just say, "Oh well, nobody was watching" when XG pitilessly exposes your blunders, then there is a very good chance that you'll keep playing carelessly in the future. I can't stress enough how important to get into the habit of always trying to find the best play, even in matches against bots that mean nothing. All of us I think, make more blunders through carelessness than we do through misreading a position.
So, for a while, I'm going to use this column to just show you some of the blunders that I make. This will do wonders for my own play and with any luck, the positions will throw up some ideas that will help everybody.

Here's the first of these, dorbel (Black) playing a Fibs GBot (White), both sides 5-away. 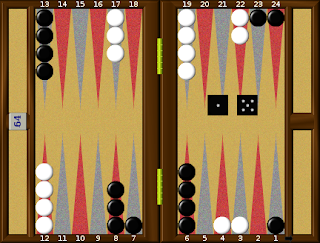 I think everybody will make the bar here, so it's a choice of three fives. Actually here is the first hurdle to jump. Did you actively consider all the fives? Can't say that I did, but there's nothing intrinsically wrong with 13/7, just a bit stolid. What I actually did was to make the action play, 23/18, 8/7, but this is easily the worst five. It encourages White to attack while she has the stronger board and no other convincing game plan for the moment. Correct is 8/7, 6/1. Once you've been forced to hit loose on the ace point, it's almost always right to make it, converting a minor embarrassment into a small asset. It's right here, by a lot, as it almost always is in the opening stages of the game. I actually knew this, I just thought that this one might be an exception! It isn't. 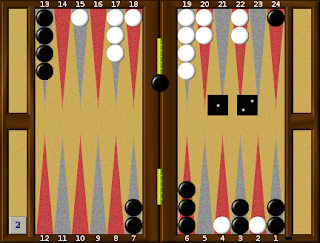 I made the 23pt. I can't really describe this as a thought process, but I think what happened was that my instinct was "Phew, I've entered and I can anchor, so that'll keep the gammons down." That's true as it happens, but of course I have to give up a lot of wins to save those gammons and bar/24, 6/4* is correct, trying to take away half (or all) of White's next roll and stop her adding another point to her prime. Instinct isn't a substitute for thought.

Lastly, if you can stand one more from this terrible game, I hit a late shot and got round to this 5-5. 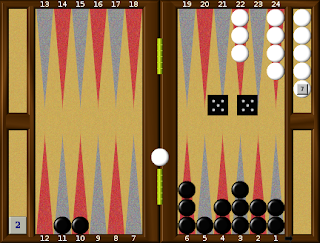 I took two men off but stacking the ace point and keeping the closed board is right. This makes Black a small favourite, while two men off makes him a small underdog. Once again, thought is required. Taking two men off leaves Black in a seven roll position with a five point board. Playing 11/1, 10/5, 6/1 leaves him in an eight roll position, but White can't enter and from this the worst that can happen is that he will come down to the same thing next turn. If he can throw 3-2, 2-1 or 1-1 he can do better than that, taking off a checker or checkers and keeping the board for yet another roll.

Learn anything? I did, so tomorrow (always a moveable feast on this blog) we'll have a look at some more dorbel blunders.
Until then, enjoy the game!

Good positions. I can easily imagine myself blundering in positions 2 and 3 even though I shouldn't. I agree with you that we all make a lot of blunders through carelessness.

"Confession is also good for your error rate."

I think that is because my mindset is that I have nothing to lose so I end up playing very aggressively which ends up resulting in a lot of blunders.

Thanks for the lesson. I look forward to your next post.