Imagine you are trailing in a match. Of course you are aware (I hope!) that you want to try and give an aggressive and gammonish double. You can double a bit earlier than usual because your opponent can't use the cube with normal freedom and because gammons gain more equity for the trailer than they do for the leader. Gammonish doubles come in more flavours than Baskin-Robbins, but here's one you might try.
Black trails 5-away, 4-away and has two men on the bar. 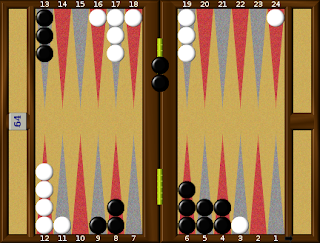 Black trails in the race by 3 pips, has two checkers on the bar and is an underdog to hit, but this is a very strong double. Why is that? Counting hitting numbers and the race are very useful of course, but here there are two more factors that count for more. Firstly White has five (5!) blots and secondly Black has the ideal 6-5-4 board with spares nicely poised for building a prime or blitzing. These things add up to volatility. Black may only have 14 hitting numbers but White will have nine dancing numbers after those hits (16 after 5-5) and two on the bar after 1-1. Black will win about 62% from here including 30 gammons that will take him to Crawford if he has doubled.
What happens when Black misses? White will still be under a lot of pressure to tidy up those blots and run her last checker out, so Black still has a lot of life after a miss.

In the match Black decided against cubing and rolled 3-1. White rolled an excellent 5-3 from the bar to produce this next position. 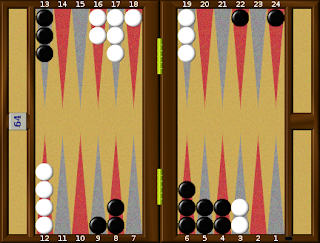 One feature of the first position is that it isn't easy to see what comes next, because there are so many possibilities and there is a near-universal dislike of cubing when the board is a fog of confusion. Now the position has settled down nicely. Black has entered both his checkers and White has miraculously got down to a single blot. Black leads by 17 pips and has 26 numbers to hit, both big improvements, but all the volatility has leaked away in one sequence. This position is relatively static and a lot less gammonish, so that although Black still wins about 62%, his gammons have dropped to 18. A cube now is a blunder.
So, what do we need to lok out for? Any time that you have that 6-5-4 combo, stick a mental flag on it that says "Cube Hot". When that is coupled with a decent number of shots and blots, you can usually ship it in, even when as here Black has men two men on the roof. Don't wait for the position to settle down into something that you recognise. When trailing in a match, volatility is all!
Who was that masked man playing the Black checkers? Don't ask Kimo-savvy, his identity must remain a mystery. Until the next time, enjoy the game.