Many, perhaps most of us, view the game in fairly simplistic ways. We count the pips, we count the shots that we leave and take into account the strength of home boards, but some positional features are rarely taken into account. Stacks, the "silent killers" as Robertie christened them weaken a position tremendously and we need to work on developing them as a priority, even when we have other things to do. Here's a nice example. 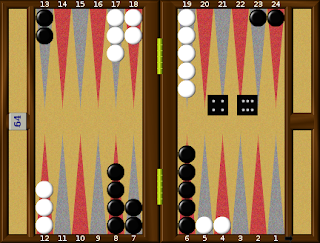 It's 0-0 in a 5 point match and Black has a 6-4 to play in this almost symmetrical position. He chose to run with 24/14, after which he will lead by nine pins, but it's a large error. The stacks are the clue. White's stacked 6pt means that it is very hard for her to build her position naturally and she faces some awkward rolls next turn, so there is no great pressure on Black to escape and in fact trying to do so eases the pressure on White a little. Black must develop his own stacks. He would have liked to hit of course, much the best way to get stacks moving, but he can't do that, so he should just make the 2pt. Then if he can hit somewhere next turn his board will at least have some teeth. Post a mental red flag on your stacks, a warning to get them into the game asap.

In game two and trailing 0-1 to 5, Black again has a stacked 6pt. He has just cubed. 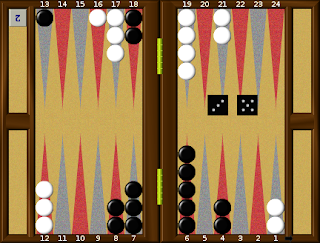 Black has a big pip lead, 124-152 before this roll, so it seems reasonable to try and get into the race with 18/13, 18/15 and leave 13 shots. It's an error. Black's stack on the 6pt is even weaker than before, because he has already made the 4pt, one of the natural homes for those checkers. His best play is 8/3, 6/3, leaving 14  shots rather than 13, but strengthening his board and keeping his anchor, a good trade for one extra shot. Note too how leaving the anchor lifts the pressure on White's outfield and her blot on her 9pt.

Like number 11 buses you wait for ever to see an unstack problem and then three come along at once! 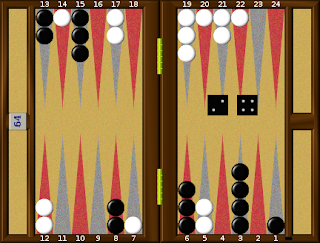 Now we are in game 4 and Black leads 4-1 crawford with a 4-2 to play. A funny old position and Black leads 118-145 before the roll. He looked at the two blots in White's home board and decided on 15/9 as his play, a blunder. Not only does this leave an unnecessary shot, but it does nothing about the stack on the 3pt. Those spares have to be put to work and 6/2, 3/1 is the play, strengthening the board and slotting the 2pt so that Black will have a good 1 to play. 15/11, 3/1 is a good alternate on the same theme.
Of course there isn't much point in developing stacks just for the sake of neatness, but in this position it seems highly likely that there will be hitting down the line and a strong board is going to be very useful.
Flag those stacks and get them moving. When your opponent has stacks, don't go near them, as she wants to hit with them if she can. Lastly, don't create stacks if you can possibly avoid it!
Until the next time, enjoy the game!

Again a really good article. The "stack" problems are often misplayed.
Let me add one thing to position 1.

IMHO thats not a pure "stacking" problem. It also matters that the backmen of White are on Blacks high home points and that adds some extra shots in case we choose to run.

Just put the man on blacks 5 to blacks 1, then its right to run.

Question:
What do I have to do to post a rollout + position? It wasn't shown correctly in preview, so I just posted the numbers.

Paul.. sorry to be rude and jump in on this post to contact you. I saw you commenting on another blog about your father a BSA rider and the 1939 ISDT in Germany. I now run the speedtracktales blog which attempts to be as close as possible to be the British fan museum to the ISDT, so much so the FIM now use us to circulate much of their own archive. you can find us at http://speedtracktales.wordpress.com/index-of-isdt-events/isdt-1939-germany/. I would welcome any recollections of your fathers involvment or if you have any photos taken you could allow me to use.