Make Mine A Double

It's noticeable that a disproportionate number of errors occur with doublets. I suppose this is to do with the fact that you have to move four checkers instead of two. The smaller the doublet, the greater number of choices usually and the greater the chance of a mistake. Here are three postions for your careful thought. As always, comments and reasoning greatly appreciated. 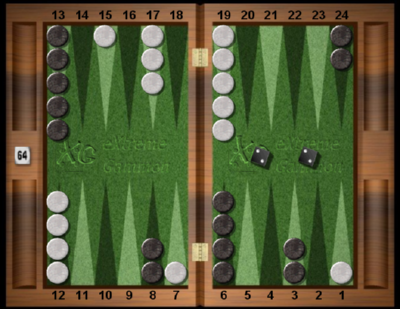 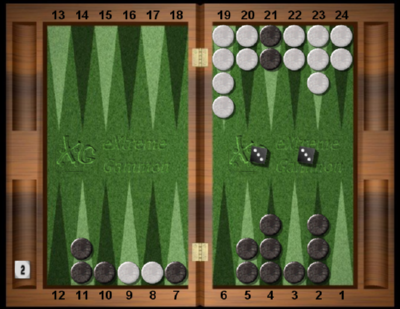 Black leads 3-0 to 21 and has 3-3 to play. No clocks and Black took half an hour to make a play here! His opponent read Bertrand Russell! Some kudos for anybody who can name the players. 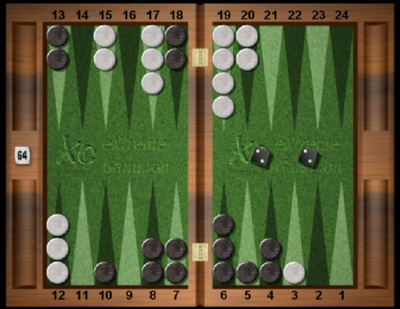 Double Match Point. Black to play 2-2. Would it make a difference if it was a money game?

Have fun and while the comments flood in from the usual suspects, enjoy the game!
Posted by dorbel at 08:19

6-4(2) and 24-22(2) leaves a big stack on the midpoint, build an anchor but we already have the strongest board, so it's better to try to continue improving our board, carrying builders from the midpoint.

owning the cube encourages a bit of risks.

if we're hit, we still have a good holding game preventing us from gammon (except the 2nd blot is hit and some bad rolls).

if we don't hit, we may not have the occasion again : isn't it an agressive game or not?

7-5, 7-3*, 10-8 (but why exposing a blot with 14 return shots? in a DMP, ahead in the race : none, but for money, with this agressive with reasonable risks play, i may try to go for a quick double after this move if he doesn't hit back and then maybe a gammon if he takes)


because it's a DMP and we're something like 15pips ahead in the race, it seems better to play safe, leaving no direct shots. only 4 indirect shots looks good, but zero is better, we can still attack just after this move.

in position (1) i like making the 4 point and switching from the 3 point to hit on the one point...all his 6s play bad and he has 9 dancing numbers (2)i have to play 21-18(2)to catch his laggers coming around and just leave no shots with 10-4 (3)i would just make the 9 point for money or at double match point..it makes me a big favourite for money and at double match point..the difference for a money game is that i can cash on all his misses

1) alright but your position is really unflexible...
he has 9 dancing rolls
there are 6 other sixes that play bad, sure.
that leaves 21 other rolls that play not so bad for him.
and you have a stack on the midpoint, and 2 unsplit back checkers.

2) maybe good. but the "i'll be paid later" solution sounds wrong for me here.
we have an anchor, the cube, we're off the race : everything say : be agressive.

there's an almost definitive rule : when you're ahead in the race, play safe, especially at DMP.
ok, you have a 5 point prime...with a hole and a blot in it.

Position 2. Wow, this is a wild and crazy position! There is almost no chance I'll get this one right. If we hit with 11/8* (the only other legal hit is 21/9* which can't be right) then I like making a four-point board with 7/1 4/1. Nothing is "safe" after 11/8* so the best bet seems to be to give White 16 dancing rolls instead of 9. If White does dance then I think we have a double. If we don't hit then I guess we should play safe. The main alternatives I see are 10/1 4/1 and 21/18(2) 10/7 4/1. I think I like 10/1 4/1 better. So I guess I'm playing 7/1 4/1 regardless, and the main question is, do I hit? Despite White's five-point board, I think hitting is our best chance here. If we wait, what are we hoping for? A later hit when we have a better board? But we're unlikely to close the 6pt and we might not get a later hit. Are we hoping to win the race? Not likely. I definitely prefer hitting at DMP, so the question is whether we lose too many gammons (and backgammons) here. Especially with a three-point match lead, we are hurt quite a bit by a gammon loss. Not at all sure but I'll still try the hit. I'm partially influenced by this position which I studied recently, where the hit was correct (for money).

Position 3. At DMP I like the priming play 13/9(2). An alternative priming play is 13/5 but that still leaves a direct shot and White is at the edge of our five-prime. For money I guess we should consider attacking with 7/5 7/3* plus some other 2 (probably 10/8). White's position is very solid, though, so I don't think a blitz is in the cards; we're primarily trying to contain the blot. Let's see if I learned the right lesson from my previous blunder; I'm going to play 13/9(2) for money as well.

Reading the other responses, I have a comment about something ∞ said: "When you're ahead in the race, play safe, especially at DMP." This is a pretty good rule and maybe your play is correct, but I'm doubtful for a few reasons. First, we're not all that far ahead in the race. If White escapes her straggler, then we'll be playing a holding game, where our slight race lead is mostly negated by the difficulty we'll have leaving our anchor. The game will be roughly equal. However, if we lock up a six-prime, then our advantage becomes huge. So, risking getting hit looks to me like a relatively small price to pay for a potentially large gain.

Thanks for your remarks Timothy and dnikeeb.

0) First I'd like to point out that it is rude to post bot results before others have commented. Please let the person who started the thread decide when it's time to post the rollout. Thank you. (I haven't looked at any comments other than the immediate preceding one, so I remain uninfluenced by gnu here.)

1) My first instinct is to make the 22 point and the 4 point. Advanced anchors and high homeboard points are very valuable and become permanent assets.

The other choice is POH on the ace and then make the four point. This puts a man on the roof against a three point board where 25% of White's rolls are whiffs and many of the others don't allow her to cover either of the blots. I'd play this at gammon go.


2) Black can't cover the blot on the three. He also can't make the six point. But he can make another homeboard point with 7/1 4/1 and then hit with 8/7. Since he has an advanced anchor and can't be cubed out he's in this one til the end. I think a somewhat agressive play makes sense. If White whiffs (~50%) black is close to cashing.

The problem with this play is not so much that it leaves a homeboard blot, it's the structural problem of the dilly-builder on the two point. But I'll palay it anyway. 11/8* 7/1 4/1


3) At DMP, you should usually favor running when ahead, which would imply 18/14(2). But with two blots hanging around I don't think I want to abandon the 18 just yet. I could play 13/5 to build a 5-prime and this looks pretty strong - I'd rather see White hit on the 13 than on the 5. Then there's 13/9(2) which puts a point directly in front of the runner six pips away. This looks strong, but I'm somewhat nervous about white shaking a two.

3b) Would money play make a difference? It might for the bot, but it doesn't for me here. I'll make the same play for money play.

i didn't post bot results but bot unresults, if i can say.

but i know i shoudln't have.

anyway, as you did, first one answers, then reads other people comments, so there's no real problem in the fact i posted my moves were wrong.

#1 6/4(2) 13/11(2) looks best to me, making two strong points. Black doesn't have to worry about defense too much, as White doesn't have anything yet. On the other hand this play might put White into trouble immediately if he doesn't make the bar or at least safety his bar point blot. I could also agree with 3/1*(2) 6/4(2).

#2 The problem with the hitting play(s) is leaving a number of blots around against a 5 point board. The problem with a safe play is that it probably loses the game - single. Without waiting 30 mins which play feels right I pick 10/1 4/1: safe now and hopefully still generating a direct shot next turn when there're less blots.

#3 We can't have everything with this nice roll. 13/9(2) looks strongest and is a giant step to a win if White can't hit.