In The Tool Box.

Robert Fontaine made some interesting points in a comment attached to my last post. Broadly speaking, he feels that because we make mistakes in so many different areas of the game, trying to work on them all at once isn't going to get results and that we would be better off concentrating on one area and strengthening our technique there. I can see the sense in this, so this is why as a preliminary I want you to find out what those areas might be. First concentrate on blunders, bad plays that have cost you at least a tenth of a point. Keeping these off the scoresheet will imediately move you into the world class category. Then begin to sort these into categories, grouping similar mistakes together. Categories with very large numbers of members are obviously those that are most going to reward work. How you then tackle these is up to you, but we'll look at some methods in a future post.
However, it is my contention that most mistakes are made for non-technical reasons. Mistakes where we have failed to grasp technique are hard to deal with, but mistakes in preparation, attitude and application are not. What do I mean by this? Here's an example. 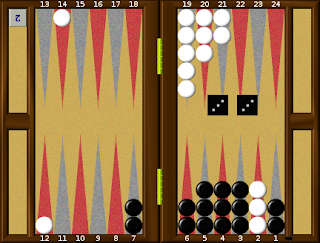 White leads 2-0 to 7 and has the cube. My student Black played 7/4, 7/1, 3/off. Why did he make this play? "I was going for the gammon" he said. Quite right too, obviously a gammon is just what the doctor ordered when you trail and you've cubed, but there is of course more than one way to skin a cat.
Technically speaking, this play carries some risk, blotting next turn on 6-6, 5-5 and 6-4. Is this a risk worth taking in order to get a checker off? Three factors need to be taken into account. First, White has a nice board already, only three points but the best three and it will improve too. It is always going to be a problem for Black if White can hit something. Secondly, we can see that as it stands, White already needs 67 pips to save the gammon, just over 8 rolls, so if Black just makes the safer play of 7/4(2), 6/3(2) and gets down to an 8 roll position himself we can guess that about half of Black's wins will be gammons anyway. Thirdly, we have to consider extended jeopardy, i.e. what happens down the line. Obviously clearing the 6pt now is going to lead to a much safer and faster bear-off later and this is actually the most important of these three factors. Both plays win about the same number of gammons, actually 47, but the safer play now with less extended jeopardy wins a lot more games, 90 against 82 for the match play. If the race to save the gammon was closer or White's board weaker, or both, then Black's play could be right of course, but here it is a big blunder.
That's the technique and this can be learned and it should, but Black is actually a good enough player to avoid this large blunder in the first place, so why did he make it?
First, he was "playing a quick match while I drunk my coffee before I went out for my run". This is a recipe for disaster. There are no "quick" 7 pointers and you can't hope to play well if you think that there are. Moreover, this sort of casual rushed match breeds bad habits like a swamp breeds mosquitoes.
Second, he played it much too fast. He has a tendency, a very common one, to speed up in the bear-in and bear-off phase, almost like a runner approaching the winning post. Really strong players actually slow down in this phase, because with the winning post in sight, they don't want to trip over their shoelaces! A mistake earlier in the game can be put right, but here it can be disastrous.
Thirdly, this is a doublet and all doublets carry an enhanced risk of blundering, so he should have said "Doublet!" and let go of the mouse. Breathe. Think. This one simple tip will save you lots of blunders, believe me.
Lastly, I am willing to bet that he had the radio on and not made any preparation to play at all. Can you imagine Andy Murray going to play or even train without preparation? Of course not, so before you play, check this list.
Have I got time for the match and am I in the right frame of mind to concentrate?
Am I hungry or thirsty?
Do I need a pee?
Is my desk tidy? (yes really).
Radio off? Phone on message?
OK, then sit down to play and give it the same effort that you would if it's a tournament for money and the opponent is Kazaross or Falafel (other opponents are available).
What's interesting about the mistake above is not that this is an especially difficult position technically, but that with proper preparation, attitude and application, it wouldn't have been made in the first place. These are things that we can all put right, without so much as opening a book. Try it, you'll play better overnight.

Of course many of us like to play for fun, without worrying too much about mistakes and improving. That's fine, live as you want to live. You'll get no criticism from me, but let me just say that playing better has two advantages. It wins more, always more fun and more subtly, it makes the game more interesting!

Until the next time, enjoy this wonderful game.
Posted by dorbel at 03:54

I have another checklist myself, more for a move by move basis:

- Did one of us just roll a huge joker or anti-joker? It's easy to pick up the pieces without thinking.
- Did the oppo blunder on his previous roll? It's hard not to instinctively want to punish the bad play.
- Are we getting into a position where most plays are routine: bear-ins, bearoffs, racing to save a gammon? Easy to switch into autopilot, particularly if we're already thinking of the next game.

Did he not play the last 3?

Good articles..it makes me have more interested on a tools info and tool boxes..

Well spotted anonymous, he did indeed play a fourth 3 and I have edited the text. Thank you.